The city of Shreveport is located in the northwest corner of Louisiana in Caddo Parish (County) and borders the states of Texas and Arkansas. It is the largest city in the area known as ArkLaTex, and has historically been and continues to be its economic hub. The city is home to roughly 200,000 people and is the third largest city in Louisiana. 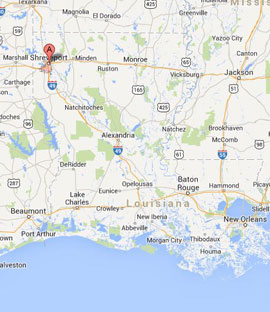 Shreveport was founded in 1836 by the Shreve Town Company, a company established for the sole purpose of developing a town where the Red River, a newly navigable channel and the Texas Trail, an overland route to Texas, and before that Mexico, converged. Shreveport was incorporated as a city in 1871. The original town site consisted 64 city blocks which currently serves as Shreveport's central business district and is also listed on the National Register of Historic Places.

In the mid-20th century, Shreveport boasted a thriving downtown district and was a cultural as well as commercial destination. Specifically, Shreveport played a central role in developing the American music scene, providing opportunities for some of the country's most famous musicians, including Hank Williams and Elvis Presley.

Over the past few decades, Shreveport's downtown area has declined. The once lively streets are now lined with vacant buildings and sparse commercial activity. Historic buildings have been demolished to make room for surface level parking lots, considered to be more profitable than maintaining an empty building. Despite the decades of stagnate economic development, Shreveport finds itself poised to regain its economic and cultural prominence. The town is home to growing natural gas and film industries and is experiencing a revived interest in development throughout the downtown area. These new opportunities make the planning and design process even more critical if Shreveport wants to achieve its goal of becoming a destination once again.

Specifically, the CPAT focused on improving walkability and transportation options in the downtown area. The CPAT used a comprehensive approach to recommend ways to provide access to both new development and renovations as well as propose adaptive reuses of historic spaces. It was critical to build consensus with stakeholders and the community on ways in which walkability and transit choices can be enhanced and economic and housing choices developed, while at the same time preserving the charm and character of this historical area.

Toward a Vibrant Downtown Shreveport

Shreveport has experienced good times and bad, typical of regional economies based on extraction. Although its economy has diversified, it has been growing very slowly for the past decade. The 64 blocks of the original town site constitute the core of the present Downtown and are listed on the National Register of Historic Places.

June 22, 2014
The team arrived in Shreveport and hit the ground running with a tour of the downtown and its surrounding areas. The team had spent months studying maps and reviewing planning documents, including Shreveport's recently adopted master plan, Great Expectation 2030 and finally they had the chance to see the site area first hand. After driving throughout the city for a few hours, the team headed to dinner to talk about how to structure the week, specifically where to start first thing Monday morning.

June 23, 2014
The Shreveport CPAT met with elected officials and important stakeholders during their first full day. Many city council representatives attended the morning meeting to learn more about the goals of the CPAT as well as to provide their insights into the challenges facing the downtown area. In preparation for the public meeting that would be held later that evening, the team spent the afternoon walking around the downtown area a bit more before reconvening at Government Plaza.  Team Leader Robert Lurcott, FAICP greeted a variety of stakeholders, spanning from concerned citizens to developers to entrepreneurs looking to open businesses downtown. The dialogue that followed focused mostly on what citizens hoped to see happen in the downtown area. Many participants had lived in Shreveport for decades and remembered when families would take the trolley into town and go shopping or go out for dinner. Steady decline from the 80s had an impact and soon, the downtown was no longer a destination. A clear take away from the meeting was that the public has a great deal of pride for their city that is rich in cultural history but there is uncertainty on how to rediscover this vibrant past. Working off these discussions as well as the recommendations in the master plan, also aimed at downtown revitalization, the CPAT began create strategic ways to help implement recommendations.

June 24-25, 2014
The team continued to meet with community members as well as spend time wandering around the downtown area, analyzing the open space, building stock, parking situation, and commercial and residential opportunities. On Tuesday the team held office hours at Shreve Memorial Library in the afternoon where people were encouraged to drop in throughout the day to offer their thoughts and opinions. On Wednesday, the team had a working lunch with His Honor Mayor Cedric Glover, who had initiated the creation of the master plan. That afternoon, with all the meetings and discussions finally complete, the team debriefed and went back to the hotel to put the finishing touches on the CPAT recommendations and final presentation.

June 26, 2014
With a final community meeting and presentation taking place in the Shreveport City Council Chambers at 5:30 p.m. the team continued to work throughout day to incorporate the stakeholder feedback and information into the final presentation. Many of the residents, elected officials and other stakeholders who had attended other CPAT meetings throughout the week came up to the final presentation to see what the team had developed. Each team member had a chance to present their analysis and recommendations and a spirited question and answer period followed. A final report is forthcoming.

December 5-7, 2013
In December 2013, Shreveport CPAT Team Leader, Robert Lurcott, FAICP, and APA project manager Jennifer Graeff, visited Shreveport to conduct a two day site visit. The visit was arranged by local planner and community team lead, Roy Jambor, AICP. The group met with community groups, NGOs, government officials and agencies and academic institutions to gain a better understanding of the challenges facing downtown Shreveport, planning priorities within the community and overall hopes for Shreveport's future. These meetings were critical to the effort of determining the expertise that will be needed for the next full team visit.

After a full day of meetings, it was clear that community feels Shreveport is on the verge of becoming one of South's most livable cities making the CPAT effort especially timely. An extensive tour of Shreveport, and specifically the central business district and surrounding neighborhoods, further complemented information shared at the stakeholder meetings. Robert and Jenifer also attended a community meeting over the weekend where many community members shared their thoughts on the master plan and were also updated on some of the town's current planning initiatives. This was also a chance to continue engaging with the community and to explain further the expectations and format of APA's CPAT program in Shreveport.

Bob Lurcott has been an independent planning and development consultant for 20 years, working mainly in southwestern Pennsylvania. His prior planning experience includes management positions with the Boston Redevelopment Authority and the Philadelphia City Planning Commission. He served as city planning Director for the City of Pittsburgh for 12 years and as vice president for district development at the Pittsurgh Cultural Trust for five years, using the arts as a vehicle for economic development. As Pittsburgh planning director, Lurcott oversaw the city’s Renaissance II downtown development effort, and managed the development of Strategy 21, the city, county, and university economic development program that garnered $450 million in state aid.

Sara Egan has been an associate at Design Workshop for seven years. Her experience ranges from regional open space and natural resource planning to planning at the corridor and downtown scale. In addition, her background in both landscape architecture and planning has supported her role in detailed streetscape and park design. Her work on the Strategic Master Plan for the Petra Region was honored by APA with the Pierre L'Enfant International Planning Award. The Larimer County, Colorado "Finding Connections to the Outdoors for Youth and Families" effort was recognized at the national level by ASLA. Egan's role in multiple corridor planning projects was recently honored at the state and national levels by the American Society of Landscape Architects.

Emil Malizia is professor, Department of City and Regional Planning, and director of the Institute for Economic Development at the University of North Carolina at Chapel Hill. His expertise spans the related areas of regional economic development, real estate development, and urban redevelopment. For over four decades, he has conducted research, taught graduate-level and in-service courses, and engaged in consulting for private, nonprofit, and public clients. He is the author or co-author of five books and over 150 scholarly articles, monographs, and other publications. During leaves, he has been a senior real estate adviser to a major life company, a visiting professor, a special assistant in federal service, and a Fulbright Senior Scholar. He has served on CPAT teams in Greensboro and Matthews, North Carolina.

Jeremy Nelson is the president of REgeneration Strategies, where he advises public- and private-sector clients on land use and transportation planning, urban design and placemaking, and real estate development projects. Throughout his 15-year career he has executed on a wide variety of projects that have catalyzed consensus, revitalized communities, and delivered lasting economic benefits. Nelson has worked at organizations that include the City of Portland Planning Bureau, Group 4 Architecture + Design, Livable City, and the Land Use and Transportation Coalition. Most recently, he was a vice president at Vialta Group and a principal and practice leader at Nelson\Nygaard Consulting where he managed multimodal transportation projects as well as a variety of public-private infill redevelopment projects.

Renee' Ollie is currently director of development services for the City of Wylie, Texas, where she oversees the process of planning, entitling, permitting, and inspecting development and redevelopment projects including review of construction and development plans for compliance with building and development codes to ensure community functionality and aesthetics. Ollie is immediate past president of APA's Texas Chapter and a member of APA's Urban Design and Preservation Division. Previously, she was state secretary and listserv manager for the chapter. She holds Bachelor of Architecture from Prairie View A&M University and a Master of City Planning from Massachusetts Institute of Technology.