The historic anchor throughout the city's growth has been Main Street, which is now Spanish Fork's historical downtown area. Spanish Fork' s downtown, similar to the downtowns of many small Utah communities, consists of five city blocks along a state highway transportation corridor, and is surrounded by a traditional grid network used by the early Mormon pioneers. Many of the buildings date back to the late 1800s and currently house small, locally-owned businesses.

The rapid population growth and (sub) urbanization of Spanish Fork has taken a toll on the historic center, specifically on Main Street, as most of the development has occurred on the edges of the city and along nearby highway interchanges. Though Main Street is home to banks, salons, medical offices, the popular local music store, the city's only library, and other needed services, it has all but faded from the community's collective daily routine. A majority of the community is reportedly opting to frequent the larger, regional commercial developments and big box stores located along Interstate 15 and Highway 6. Business owners have also reported significant competition from retail offerings in Provo and other nearby communities, as well as online shopping.

The community leaders in Spanish Fork recognize that revitalizing Main Street is the key to not only ensuring a strong future for their growing community, but also the key to maintaining their heritage. With even more commercial development planned outside Downtown Spanish Fork, as well as future transportation infrastructure projects sure to bring more people to the city, the Spanish Fork CPAT worked with city leaders, Main Street business and property owners, and community members to create a unified vision and identity for Spanish Fork's Main Street. The unified vision was the basis for drafting an implementation action plan, to set community members on a path to achieving a revitalized, authentic, and sustainable downtown.

Historic Downtown Spanish Fork is at the cusp of a renaissance for the 21st century. As Spanish Fork has grown by more than 200 percent in the last two decades, downtown’s original center has faded from the community’s attention as a preeminent destination to a place most often seen from behind the wheel as people are driving through. In recent years, private and public investments were concentrated outside of the Historic Downtown, leaving the modest, locally owned shops of Main Street to sustain their businesses with few resources at hand.

May 10-15, 2015
May 10: After months of preparation, the team arrived in Spanish Fork ready and excited to work. By participating in numerous phone calls and combing through planning documents and information on Spanish Fork, the team had developed a strong understanding of the challenges and desires of the community but remained eager to get on site and start talking to people face to face. After a quick self-guided tour of Spanish Fork led by team leader Deb Meihoff and over one of the best Mexican meals imaginable, the team prepared for a busy week.

May 11: The team headed over to City Hall bright and early Monday morning for a meeting with Spanish Fork City Council and city staff. After meeting everyone and setting up their studio space, the team, along with city staff, went for a walking tour of Historic Downtown so they could get more familiar with the study area. The highlight of the day was the Community Open House and BBQ with Spanish Fork Mayor Steve Leifson. Held at Spanish Fork's City Park, this was an opportunity for the community to talk directly to the team and to offer their visions for an even better downtown. Mayor Liefson manned the grill cooking up hamburgers and hotdogs, while City Councilors served up the food and cold drinks. The team talked to hundreds of residents about the reasons they frequent Main Street, as well as reasons why they have stopped. The team received further direction from the community about downtown from written comment cards.

May 12-13: The team conducted interviews, held focus groups, talked to downtown employees and visitors on the street, toured nearby communities in Utah County, and continued to spend time on Main Street. On Tuesday, the team facilitated a productive focus group with Historic Downtown business and property owners. The team listened to this important part of the community. Their insights, as well as enthusiasm for potential opportunities in their historical district served as a platform for many of the recommendations that would eventually be included in the final report. On Wednesday the team held additional one-on-one meetings with residents, property owners, merchants, and community leaders, to gain further insight into their experiences in downtown and also prepare for a community walking workshop along Main Street. The goal of the walking workshop was to elicit feedback and ideas about potential opportunities for design, street enhancements, and infill development that could help bring people back to Main Street as well as create new business opportunities. A group of more than 30 people walked to points of interest in Historic Downtown where the team suggested design and land use alternatives. Team members had a chance to test recommendations and solutions to some of the most critical community issues, such as pedestrian safety crossing Main Street and business visibility.

May 14: Full of ideas, the team worked all morning to pull together the final observations, analysis, data, community input, and drawings that would serve as the foundation of the final report. Thursday afternoon, the team presented their recommendations to members of the Spanish Fork City Council, Planning Commission and the community at the public library. The team was happy to see many of the community members who had participated in CPAT meetings throughout the week also came to the final presentation on Spanish Fork's Historic Downtown and to meet participants new to the process. The team presented their sections and then held an interactive question and answer session centered on posters and graphic examples depicting some of the more important recommendations and implementation steps. Each team member was responsible for a poster station and for answering questions (Your Main Street, Your Buildings, Your Business Potential, Your History, Culture and Community) as participants walked from station to station to learn more and to figure out how they could become involved.

May 15: On Friday the team presented its recommendations during a special lunch briefing with City and Historic Downtown leadership. This was an important opportunity for team members to go into more detail on specific recommendations and discuss next step strategies with those who would be responsible for implementing many of the team recommendations. The two-hour discussion would be the final meeting for the CPAT volunteers and proved to be a wonderful way to close the week. After many informative, thoughtful conversations and meetings, the team began to write up recommendations and strategic steps to help the Spanish Fork community implement many of the ideas discussed throughout the week. 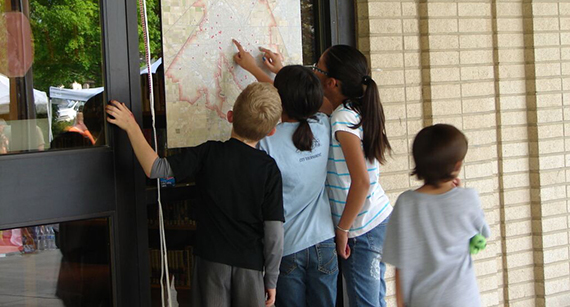 December 2, 2014
On December 2, 2014, team leader Deb Meihoff, AICP, and APA staff member Jennifer Graeff visited Spanish Fork to meet with city staff, elected officials and many of the small business owners located on or interested in Main Street. The team met with Dave Anderson, AICP, Spanish Fork's Community and Economic Development Director who took Meihoff and Graeff on a tour of project site and surrounding areas. The team then participated in a two hour lunch meeting with city council members, members of the business community, interested community members and members of APA's Utah Chapter to talk about their hopes for Main Street, as well as their concerns. The meeting provided a great deal of information for the APA team, which will be useful in identifying the team members needed for the CPAT project. The team plans to return to Spanish Fork in spring 2015.

For more than 20 years Deb Meihoff has devoted her career to revitalizing and developing communities. She is principal and owner of Communitas, a consulting firm based in Portland, Oregon. Meihoff brings people and teams together to collaboratively explore problems and solutions, tackle cities' economic challenges, and find the key steps to make great places happen. Her experience in economic development, planning, policy, redevelopment, and construction gives her the ability to connect community goals with marketplace realities. Meihoff holds a Master of Urban and Regional Planning degree from the University of New Orleans and received her Bachelor of Arts degree from the University of Colorado-Boulder. Meihoff may be found in the bike lanes of Portland or exploring coffee shops around the globe.

Andrew Vesselinovitch has headed the bicycle programs for the New York City departments of planning and transportation, served on the San Francisco Bicycle Advisory Committee, and managed the Bloomingdale Trail for The Trust for Public Land and Ross Barney Architects. Vesselinovitch also served as project manager for the Chicago Riverwalk. He expanded New York City's "bike week" to a month, introduced the first bilingual promotion campaign, and increased the distribution of free maps. There was a more than 20 percent increase in bicycling during his tenure. Vesselinovitch is a self-described "working cyclist." Born and raised in Chicago, he returned to study and practice architecture. His thesis was a proposal to turn a wide segment of Chicago's Broadway into a multi-use street.

Robert A. Simons is a professor at the Levin College of Urban Affairs at Cleveland State University. He is also the faculty advisor for the Certificate Program in Real Estate Development and Finance at CSU. He is the former director of the Master of Urban Planning, Design and Development program. Simons was a 2005 Fulbright Scholar at Wits University in Johannesburg. He received his Ph.D. from the University of North Carolina at Chapel Hill in City and Regional Planning. He also holds Master of Regional Planning and Master of Science in Economics degrees, both from UNC. He is the author of Turning Brownfields into Greenbacks and When Bad Things Happen to Good Property. His latest book on adaptive reuse is forthcoming from Kent State University Press. He also serves as associate editor for the Journal of Sustainable Real Estate.

Robyn Eason has 10 years of professional experience in urban planning, neighborhood revitalization, and sustainability. She manages and directs the certification process for LEED 2009 for Neighborhood Development at the Green Building Certification Institute, while also performing reviews and quality control responsibilities for the LEED Building Design and Construction Rating System. Previously Eason worked in the private sector to determine future development scenarios and develop implementation strategies to guide market and economic transformation. Eason holds a Bachelor of Science in Architecture and a Bachelor of Civil Engineering from The Catholic University of America and a master's in City and Regional Planning from Clemson University. She is a member of the Urban Land Institute and the International Society of Sustainability Professionals.