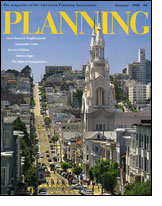 Mark Hinshaw tells what it takes to make outstanding neighborhoods — including 10 that APA has picked for recognition.

Children are still suffering in the aftermath of the 2005 hurricanes. Coleman Warner reports in an Overlooked America story.

Saving the World Through Zoning

Chris Duerksen explains how a sustainable community development code can come to the rescue.

Reuse vs. Tear Down

Keenan Hughes focuses on the green wrinkle in the current preservation debate.

The Right to Transportation

An excerpt from a new Planners Press book addresses the equity issue. By Thomas Sanchez and Marc Brenman.

Learning from our mistakes.

Cover: View to the west on Filbert Street in the North Beach neighborhood of San Francisco. In the foreground, Sts. Peter and Paul Church. Photo courtesy Daniel Schwen.