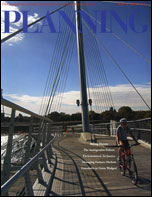 How American communities are dealing with a flood of immigrants. JoAnn Greco reports on the big picture, and Jeffrey Spivak provides a sidebar on Olathe, Kansas.

Have we made any progress in the last 25 years? James Krohe Jr. seeks an answer in an Overlooked America story.

Modernism may get an update in Los Angeles's Century City. Josh Stephens reports in Planning Practice.

John Gaber and Sharon Gaber explain how to use photos as a research tool. An excerpt from a new Planners Press book.

Isabelle Groc suggests that cities may be missing a bet by neglecting farmers markets.

Gardens in the Round

Pressure on open space in the U.K. may lead to major compromises. Jim Hecimovich reports from England.