David Pesnichak, AICP, and his wife, Sami Dinar, both have jobs in the planning field — and in this tough economy, that's saying something.

So why are Pesnichak, a senior planner with Garfield County, Colorado, and Dinar, the owner of a small firm called Lost and Found GIS, quitting and moving on? In part, they are concerned about whether both of them will find more opportunities in the Roaring Fork Valley where they live. "It's a small valley, and without a booming economy, it's hard to find work in the same place," says Pesnichak.

They have signed on with the Peace Corps and are waiting to hear whether they'll spend their 27-month posting working in Morocco or Jordan. "Part of what intrigues me is the opportunity to get a broader sense of the role of planning in developing countries," says Pesnichak. He adds that a challenge to traveling on this path is that "there are no guarantees on where you'll be sent or what issues you'll be working on."

Where employment is concerned, there don't seem to be many guarantees anymore. Still, planners say there are some bright spots in the job market right now and in the near future.

How bad is it? 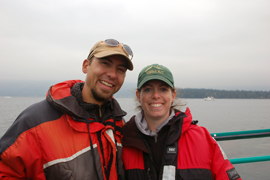 The latest news from the U.S. Bureau of Labor Statistics is not good. Employment continued to decline in April, with the unemployment rate increasing to 8.9 percent from 8.5 in March. Some 5.7 million U.S. jobs have been lost since the beginning of the recession in December 2007.

Planning agencies nationwide are laying off staff, instituting pay cuts and unpaid furloughs, shifting workers to other departments — or a combination of the above. Following cuts earlier in the year, the Seattle planning department laid off 26 people (three of them planners). Monroe County, Michigan, south of Detroit, has seen its planning department staff contract from 16 to four since the recession began. Petaluma, California, lost its entire staff. (See the news story on this topic in this issue.)

A sign of the anxiety created by this situation is the reluctance of a county-level planner interviewed for this story to be identified. He said he didn't want to attract attention to the planning department while other county departments were cutting staff.

Fewer jobs are out there. The number of postings on APA's Jobs Online service decreased by more than 60 percent in the first three months of this year compared with the same time frame in 2008. But while that measure and anecdotal evidence shed some light on the situation, there are no hard data on employment in the planning field. (Neither "urban planner" nor "planner" are among the 800 occupations that the Labor Bureau tracks.)

Consulting jobs are harder to come by, too, and planners are reporting greater competition and narrower profit margins, although none of the consultants interviewed for this story have seen a marked drop-off in RFPs. (For more on consultants, see "Fierce Competition" below.)

Planning management consultant Paul Zucker, FAICP, remembers major layoffs in the 1980s and says of this recession: "It's at least as bad, but probably worse than I've seen."

Recovery in the Recovery Act?

"I've got three words for you: infrastructure, infrastructure, infrastructure — and as broad a definition for that term as you can think of," APA board member Jeffrey Lambert, AICP, said at a roundtable discussion about career planning at APA's National Planning Conference in Minneapolis in April. Like other planners, he has noted that a new federal focus on major planning issues — from investment in high-speed rail and alternative energy to improving infrastructure nationwide and addressing climate change — could help planners in these tough times. Just how this might translate to jobs on the ground is unclear, however.

Some argue that planners could play a big role in putting money from the American Recovery and Reinvestment Act to work in their communities, but, says Ty Warner, AICP, a principal planner for the Chicago Metropolitan Agency for Planning, "I don't really know whether it is providing work." That is because the infrastructure projects being funded with those dollars were already planned.

Fred Abousleman, the executive director of the National Association of Regional Councils, adds that other aspects of the funding package could cause regional councils of government and metropolitan planning agencies to staff up. But those jobs are likely to be in the areas of workforce development, aging services, and economic development — areas that may or may not employ planners. More money for the Community Development Block Grant Program and affordable housing could help that sector. And, says James Potter, AICP, a HUD community planner: "We are very encouraged by the administration's language about the environment."

Another opportunity may lie in being able to analyze the ARRA legislation itself. Good Jobs First, a watchdog group that keeps an eye on public subsidies to corporations, wants to hire someone to monitor how ARRA funds are spent and help to increase transparency in the process. Executive director Greg LeRoy notes that a planner would be welcome in this position (there are already planners and GIS professionals on staff there). "I think they bring invaluable skills. I like planners because they think systemically, and the kind of training they get is good training for the analytic work we do here," he says.

Looking to the feds

One bright spot for planners seems to be the federal government. David Van Horn, AICP, the federal planning program manager for the engineering and planning firm URS Corporation, says the arena offers far more job opportunities (for both federal employees and consultants) than most planners may realize. He says his clients are chiefly in the departments of Defense and Homeland Security.

The Navy is hiring as well. "We have approximately 70 positions available worldwide [for planners]," says Larry Chernikoff, a community planner for the Naval Facilities Engineering Command in Washington, D.C. NAVFAC, as the agency is known, "brings in planners at all levels, not just recent graduates," he adds.

Chernikoff and his colleague, Pamela Spearow, director of civilian personnel programs, point out that planning jobs at NAVFAC are civilian jobs. "We do transportation planning, land-use planning. When we have a new ship coming to port, we need to plan for docking [facilities], warehousing, housing of the sailors — anything you do for cities, you would do for an installation," says Chernikoff, in describing the work.

Planners might consider federal work for a variety of reasons, not the least of which is job security, since the federal government is less subject to the market ups and downs that affect city and county planners and consultants. Chernikoff says government work also provides a varied professional development path, travel and relocation opportunities, and health and retirement benefits not usually offered in the private sector.

In the coming years, job opportunities are expected to open up as a wave of older workers retires. A February 2009 report from the Government Accountability Office noted that 33 percent of federal workers will be eligible to retire by 2012, and in four agencies — the Agency for International Development, the Department of Housing and Urban Development, the Small Business Administration, and the Department of Transportation — that number is 46 percent. Van Horn says the aging of workers is "a tremendous concern" in the federal government.

It is helpful to know that federal government jobs are posted on an official website, USAjobs.gov, and information about jobs in specific agencies can be found on their respective websites.

When searching for any job, veteran planners agree that it is important to cast a wide net and keep your definition of planning broad. Planning work may turn up in unexpected places. (See the Job Hunt Tips below.)

Jeffrey Lambert can testify to that. He was once the land-use manager for the health company Kaiser Permanente, working with local governments to site or expand medical facilities. "A significant reason Kaiser Permanente hired me was my APA involvement," he says. "They knew that when I went to a city with the 'AICP' after my name planners would listen to me." (In a follow-up email, Lambert noted that he is transitioning from running his own consulting company back to city government. He expected to start as Community Development Director of Ventura, California, in June. "So, obviously some municipalities are hiring — although not many," he wrote.)

Planners might also consider opportunities like the Peace Corps. David Pesnichak was encouraged by his manager, Fred Jarman, AICP, Garfield County's building and planning department director, who came to planning following his stints with the Peace Corps and, subsequently, UNICEF in the 1990s. "Planners have the basic sense that your job is to help this community become better, whether that's through health education, mud and bricks, transportation projects, or water projects," he says. (The Peace Corps thinks planning training is valuable, too. Search "urban planning" on its website to find out more.)

Rebecca Little wants to go another route. She is an alternate in the Fulbright Program, hoping to study disaster planning in New Zealand, a specialty she developed as an intern with APA's Hazards Planning Research Center as she sought her masters of urban planning and policy at the University of Illinois at Chicago. (She graduated in May.) Other international opportunities may be available through USAID or BUNAC (British Universities North America Club), an overseas work program for university students.

Some planners actually see a silver lining in the recession. One firm, Progressive Urban Management Associates, is busier than ever. Cities and downtown associations in the Denver area are moving forward with plans, retooling or scaling them back to jibe with economic realities rather than scrapping them altogether, says the firm's senior associate, Anna Jones. The consultants help clients reassess business development, plan phasing, financing opportunities, even commuting patterns. "Making the economic argument is really compelling right now, and I think this is something that's here to stay," she notes.

Bret Keast, AICP, president of the Kendig Keast Collaborative, points to another unexpected benefit: Planning agencies are attracting more — and more varied — consulting firms to bid on projects. "They're in the catbird seat in terms of getting proposals from the best firms in the country. They're getting very competitive proposals," he says.

Not to make light of the layoffs the profession has seen, but the situation does put both public agencies and private firms in an enviable position for hiring. Keast remarked on the number — and more important the quality — of resumes his firm received for a recent opening.

Several planners in the public sector note that agencies are shifting their focus from current to long-range planning since they don't have an urgent need to process development applications. "Planners that are still lucky enough to have jobs are excited about the possibilities that they have in front of them because there is more time to do long-term planning," says Joseph Kearney, program manager for the Chaddick Institute of Metropolitan Development at DePaul University in Chicago.

That is the case in Tinley Park, Illinois, says planning director Amy Connolly. The city is considering developing its community master plan in-house, whereas before it might have hired a consulting firm. The move has several potentially positive results. Having staff work on the plan reinforces the notion in the community that planning and planners are important. It also makes staff feel more responsible for the plan since there are no consultants taking the heat — and the praise — for the work.

While the times are certainly hard right now — as are the attendant hiring freezes, increased health benefit costs, and travel bans — Connolly is one planner who sees a bright side in the recession. "I've been making a case for a year and a half to increase the role of planning. It's exciting to have the opportunity to do the comprehensive planning we were trained to do."

Federal Jobs: At USAjobs.gov, jobs are classified by numerical series. The community planner series is 0020. Other series related to planning: 0301 (administration and program staff), 0800 (engineering), and 0401 (biological and natural resource). Federal internship information is at www.pmi.opm.gov.