This issue explores the concept of "Sustaining Places." The articles on aging in place and affordable housing explain how places can sustain people, while the stories on Reston and other new towns show how planning can create — and sustain — communities. An upbeat piece on greenways states outright that planning should start with green elements. More challenging are the stories on energy. They ask whether we are prepared for the long haul — because no energy source is entirely clean, even the renewable ones. 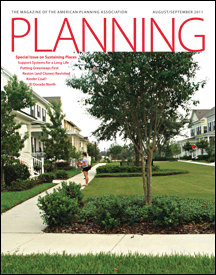 Aging-in-place programs are changing entire communities, says Adam Regn Arvidson. With a sidebar on the ADA by Stephen Carter-Novotni.

A New Day at Sunrise

In Charlottesville, Virginia, Habitat for Humanity carves a neighborhood out of a trailer court — but keeps affordable housing in the mix. By Daniel Nairn.

Suzanne Sutro Rhees relates the stories of three master planned communities that have come of age.

Randall Arendt explains how to create healthy and connected communities — in this month's Planning Practice.

Like it or lump it, it's the nation's most abundant energy source, and now other countries covet it. Allen Best takes a trip to Wyoming.

Canada enjoys the upside — and copes with the downside — of its remarkable oil boom. Andrew Nikiforuk asks how the mining region can be sustained.

Statistics in the news, compiled by APA's Research Department. This month: energy.