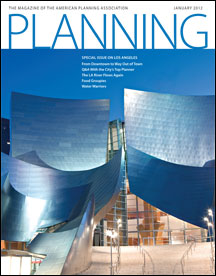 It's a denser, more transit-friendly city than most of us realize. Christopher Hawthorne takes a tour.

My LA — Yesterday and Today

Los Angeles is turning its river from an afterthought into a destination. A Planning Practice article by Lorelei Laird.

Steve Preston explains how ethnic diversity enriches the LA suburbs. With a sidebar by Lois Takahashi and a web-only sidebar by James Rojas.

The Red and the Black

From Main Street to the state capital, budget cutbacks are forcing agencies to work smarter. Paul Shigley counts the ways.

Mike Taugher navigates the shoals in this Sustaining Places story.

The Devil Is in the Delta by Paul Shigley

Statistics in the news, compiled by APA's Research Department. This month: California facts.