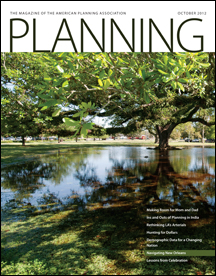 Making Room for Mom and Dad

Ins and Outs of Planning in India

Richard Wilson describes his experiences on the subcontinent. With a sidebar on Christopher Benninger's new book.

Nathan Cherry says it's time to redesign Venice Boulevard and other roadways like it.

Demographic Data for a Changing Nation

With perimeter work done, the city was turning to internal water management issues before Hurricane Isaac hit. By Meghan Stromberg.

Anne Wyatt takes a stab at reconciling the fantasy and the reality in Disney's Florida new town.

Statistics in the news — compiled by APA's Research Department. This month: obesity.

Research You Can Use

Reid Ewing and Randy Crane duke it out over a recent JAPA article.

The tricky dilemma of smart growth.