Landslides are fairly common, but they are rarely as deadly as the one that happened in Snohomish County, Washington, in March. It killed 35 people (as of this writing) and destroyed 49 homes. Landslides have occurred on that hillside several times since the late 1940s — most recently in 2006 — but none were this extensive.

And while it was known that another slide likely would occur on that slope outside the town of Oso, when it would be reactivated, its size, or how much damage it would do probably wasn't known, experts say.

Landslide hazard maps do exist in places, but they don't typically show the probability of a landslide, as do maps for other hazards such as floods, says Laurie Johnson, AICP, an urban planning and hazard planning consultant based in the San Francisco Bay area. "Probabilistic landslide assessment risk is a fairly new and sophisticated field," she says.

There are tons of variables in landslide risk assessments — from what materials make up the slope to the potential triggers to the changing dynamics of erosion, Johnson notes. "You'd have to do some sophisticated simulation modeling to generate a fully probabilistic risk assessment. That kind of analysis is not being done for landslides," she adds. In part, that's because they aren't typically required by state or local regulations.

It's not known whether a regional assessment of the type Johnson describes existed for the area; Snohomish County officials didn't respond to a request for information. Its website does note that when new development is proposed in an area known to be at risk for landslides, applications must comply with the Geologically Hazardous Areas provisions of the Snohomish County Code. Those land-use regulations were updated in 2007, consistent with the state Growth Management Act's "Best Available Science" mandate.

The provisions require reviews of landslide hazards, but only on the proposed development site and in an area within 200 feet of it. A proposal to build in a downslope area requires no analysis of upland conditions. (In Oso, the destroyed homes were at the base of the slope; there was no development on the hillside itself.) 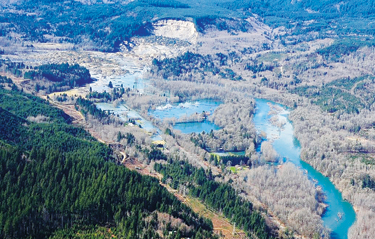 One of the difficulties in these situations, notes Robert Olshansky, FAICP, a professor of urban and regional planning at the University of Illinois at Urbana–Champaign and an expert in hazard planning, is that the area may have been subdivided long ago. "There's a lot of power at the subdivision stage — engineering studies, various conditions of approval, determinations of the appropriate number of lots . . . and in most places we pretty much know how to do these things now," says Olshansky.

But after subdivision, it's unlikely that regional risk assessments or risk-reducing actions such as slope stabilizations would take place in most places absent regulations. Upland and downslope land owners could collaborate and pay for such activities, he says, but that isn't common.

Or the government could step in. Without a regulatory requirement, that typically isn't done, but Olshansky suggests it should be. "It would be worth the effort for local governments to work with property owners to facilitate cooperative solutions."

In Oso, the first subdivision occurred in 1960, although some houses existed before then, according to the county website. Houses were permitted in 2006 and 2007 outside that initial subdivision, but it isn't clear when that area was subdivided.

There is still much to be learned about what happened in the Oso landslide, but Olshansky calls it a wake-up call. The message, he says, "should really be that local governments need to take a more active role in making sure that this does not happen to them. The most obvious way is to use great care at the subdivision stage. But they could also be more active once hazards are discovered in existing developments."

The record-breaking 93.29 percent ice cover on Lake Michigan this winter and the highest snowpack in a decade could cause lake water levels to rise 14 inches by August. This comes after a record low in January 2013 of 2.78 feet below the long-term average. Low water levels have been attributed to evaporation caused by climate change.

Target Field Station, adjacent to the home of the Minnesota Twins, is set to open this month. The $79 million mulimodal transit hub, when complete, will see 500 trains a day, and include a public plaza, amphitheater, and retail space. The station is expected to help transform the western edge of downtown, notes the Star Tribune.

State governments' tax revenues increased by 6.1 percent last year, to a record $846.2 billion, reports the U.S. Census Bureau. All but Alaska and Wyoming saw a bump in 2013.

Residents of Slab City, a 480-acre squatters camp in the southeast corner of California, have formed a community land trust, Slab City Community Group, Inc. The group petitioned the State Lands Commission in January for ownership of the land.

The land agency now administers the unused school set-aside land and former military base near the town of Niland. Revenues benefit the State Teachers Retirement System. Approximately 200 full-time and 2,000 winter residents free camp in Slab City, popularized in the 2007 movie Into the Wild. But the state has never seen proceeds from this parcel.

"If this goes through," says resident and SCCGI board member Lynn Bright, "this will be the first successful community land trust to get a land transfer" from the State Lands Commission. Jim Porter, the SLC public land management specialist, could not definitively confirm that but notes he hasn't seen such a transfer in his 14 years with the agency. 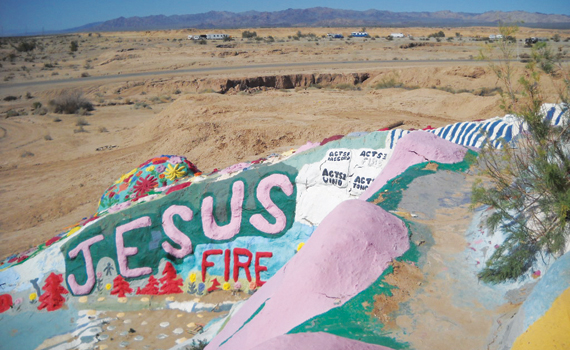 Bright says SCCGI has more than 170 members yet acknowledges that not all residents are in favor of the purchase. Organizing in this community, known for attracting an independent-minded crowd, including anarchists and conspiracists, will not be easy. Plus, site development challenges include potential water and ground contamination, a lack of utilities and other services, and proximity to an adjacent gunnery range.

Whether self-rule through land ownership could help the residents of Slab City, known as "the last free place in America," sustain their off-grid lifestyle or it threatens their way of life is the question.

Mayor Bill de Blasio is looking for 200,000 new or used homes in his town. The New York City mayor made providing affordable housing a key campaign issue. A third of New Yorkers pay half or more of their income in rent and utilities, and public housing across the five boroughs is due for repairs and renovations to survive weather as cataclysmic as Hurricane Sandy.

Two hundred miles away, Mayor Martin Walsh inherited a redeveloped Boston from Tom Menino — and an ambitious plan to make it more so, to the tune of 30,000 new housing units in the next six years.

Although many are daunted by the plan in the wake of reduced funding programs for housing, De Blasio is moving forward. He wants now-illegal basement apartments to be made legal in some cases. He's also considering putting $1 billion of New York City pension funds into creation and preservation of lower-rent units, and intends to make mandatory the city's inclusionary zoning program, which currently allows developers to expand beyond their plans' original size if 20 percent of the units are affordable.

Boston already requires new developments with more than 10 units to set aside affordable units, which are built on- or off-site. As an alternative, the developer can contribute to an affordable housing fund an amount equal to the cost of the development of one affordable unit, multiplied by 15 percent of the total units of the project.

Housing Boston 2020, a cross-agency Menino administration plan, projects 100,000 new jobs by 2020. The program focuses on housing a highly educated workforce between the ages of 20 and 34, as well as seniors, empty nesters, and downtown families.

In summer 2013, the Boston Redevelopment Authority approved 450-square-foot studio spaces within one mile of accessible public transit, downsized its one-bedroom apartment minimums to 625 square feet (from 750) and two-bedroom minimums to 850 square feet (from 900). It even tested 350-square-foot spaces in South Boston's Innovation District. Only time will tell what the Walsh administration will bring to the BRA and the plan.

"The need for affordable housing for the poorest households is bigger than ever," says Linda Couch, senior vice president for policy of the National Low Income Housing Coalition. "But the lending, planning, development, and other involved communities are also more sophisticated than ever."

Couch says that de Blasio's goal is feasible. "There's certainly a need for those units. I think the lack of affordable housing has become one of the greatest issues facing mayors in most cities. De Blasio seems to be doing his best to stay at the forefront of getting people stably housed."

Apart from state, city, and private funds, Couch is hopeful that the new National Housing Trust Fund will help New York and other states stricken with the same problem. The NHTF is projected to receive its first funds from Freddie Mac and Fannie Mae in 2014, and 75 percent is earmarked for low-income housing.

Couch suggests there is no one-size-fits-all model. Cities should study their own needs and plan what's best for them and how to allocate their efforts effectively.

White is a pseudonym for a Boston-area writer.

Housing Plans At a Glance