For years, StarMetro operated a hub-and-spoke transit system that brought all passengers to one central transfer location downtown. Riders were forced to unnecessarily travel through the central business district to get to work, resulting in extended commutes and overcrowding. A survey revealed that 93 percent of passengers were traveling somewhere other than downtown. StarMetro was tasked with decentralizing all routes at the same time, within its normal operating budget.

StarMetro staff spent five years preparing for decentralization. Public meetings and studies were used to understand the needs of the community. An employment density map was used as a predictor of transit ridership and initial routes were drawn to connect the areas of highest employment concentration. The new transit system reduced transfers at the downtown terminal by 30 percent; decreased total transfers system-wide by 14 percent; decreased the number of routes that share at least one mile of service from 21 to two and increased ridership by 21 percent in December 2011. 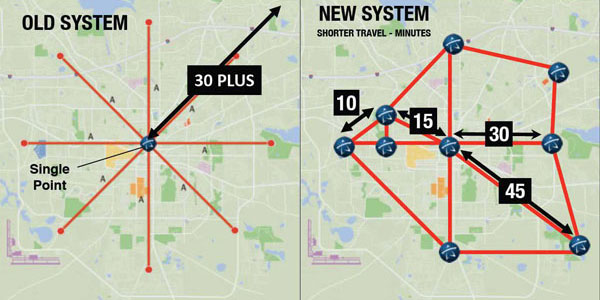 This picture illustrates the hub-and-spokes system versus the decentralized system in regards to trip pattern and travel time.