The American Planning Association has selected Pike Place Market as one of 10 Great Neighborhoods in America for its functionality, memorable characteristics, and livability. With a history as rich and colorful as the produce it sells, the community is Seattle's most compact, walkable, and diverse neighborhood. 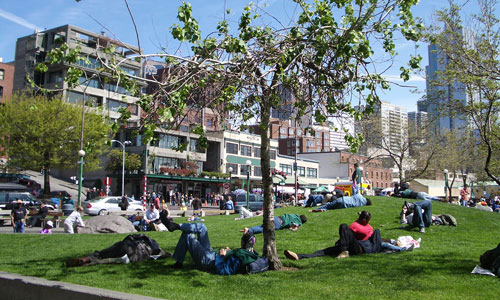 Pedestrians rule in the Pike Place Market neighborhood. They have the right of way and, when sidewalks are full, walk without fear down the middle of the street. Those choosing to drive must be willing to creep at a pedestrian pace.

A stroll down this brick-paved road reveals human-scaled building facades that encourage foot traffic. The rhythms of local street musicians add a sense of festivity and encourage passersby to pause and enjoy the melodies, if only for a few moments.

The character of the neighborhood — a designated historic district since 1971 — is protected by the Pike Place Market Historical Commission, which reviews all design and use requests. To preserve the market's original intent of "meet the producer," owner-operated businesses are required, and franchises and chains are not allowed.

Were it not for a revolt over the price of onions, the centerpiece of Seattle's Pike Place Market neighborhood might not exist today. Between 1906 and 1907, as the cost of onions increased tenfold, outraged citizens became fed up with price-gouging middlemen and demanded change. A city councilman proposed a public street market where residents could buy directly from farmers. On a dreary, damp August morning 100 years ago, thousands of eager shoppers quickly overwhelmed the eight farmers who set up their wagons on the corner of First Avenue and Pike Street.

Spared from the wrecking ball numerous times by citizen activists, Pike Place Market occupies a unique spot in Seattle's history. With the rise of the automobile in the 1920s, the city considered moving the market to allow cars easy access to the waterfront. Farmers won the fight by one council vote. A few years later the city eyed the property for creation of a new civic building. It was the Great Depression, however, that finally brought a truce as the market became a major supplier of affordable food. 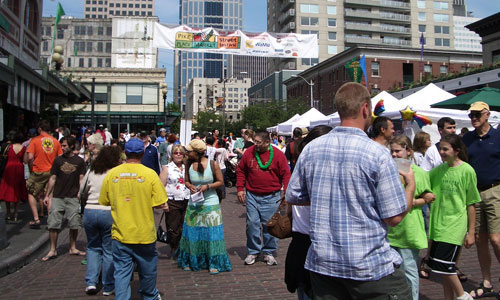 Today, Pike Place Market is recognized as the nation's premier farmers' market. It is home to nearly 220 year-round commercial businesses, 210 crafters, 100 farmers, and 250 street performers, and an integral part of local sustainable agriculture efforts. The market attracts some 10 million visitors each year. Some come for the ethnic and specialty goods that are exclusive to the market, others for daily groceries.

The greatest threat to the market came in 1963 when an association of downtown businesses proposed replacing it with parking garages and high-rise office buildings. The Pike Plaza Redevelopment project was submitted in Seattle's 1964 request for federal urban renewal funds.

Led by a prominent local architect and professor, Victor Steinbrueck, and artist Mark Tobey, Friends of the Market fought the city's plans. The battle raged for more than a half dozen years until, in 1971, voters approved an initiative creating a seven-acre historic district and the Pike Place Market Historical Commission. The city then purchased most of the buildings in the district and transferred them to a newly created entity, the Pike Place Market Preservation and Development Authority.

A decade later, the authority used urban renewal money allocated to Seattle to purchase and renovate the Market District. Emphasis was placed on historic preservation of the buildings and traditional market uses.

The Pike Place Market neighborhood continues to lead by example. Its compact, pedestrian-oriented design and range of housing options served as the inspiration for the city's Downtown Livability Plan, passed in 2006. Despite ongoing financial and other challenges, its community continues to fight to sustain its viability. It serves as a reminder that it is not just a mix of buildings that define a place but, rather, the mix of people that infuses a neighborhood with a distinct voice and personality of its own. 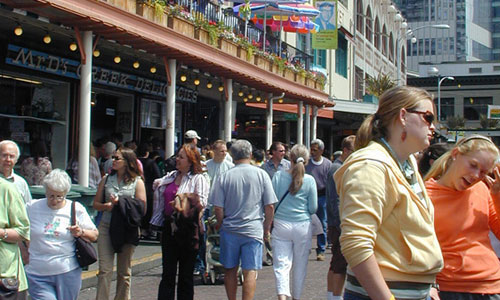