Recognizing the limits of their authority to address safety concerns, residents, citizen groups, and alliances from Baltimore's Charles Village neighborhood turned to the Maryland State Assembly for help. They proposed establishing a benefits district so they could collect a small levy from property owners for additional security and sanitation services. At the time such districts had been established for U.S. downtowns and commercial zones only and not for residential areas.

The neighborhood's proposal was approved, enabling the Charles Village Community Benefits District to be formed in 1994. Funded by a minimal levy on property values, the district has successfully managed to cut crime in half since its inception while serving as a model for three additional service districts in Baltimore.

Given the neighborhood's strong and dedicated activist community, economic and social diversity, and memorable character enhanced by designs from the renowned Olmsted Brothers firm, APA has named Charles Village as one of 10 Great Neighborhoods in America for 2008. 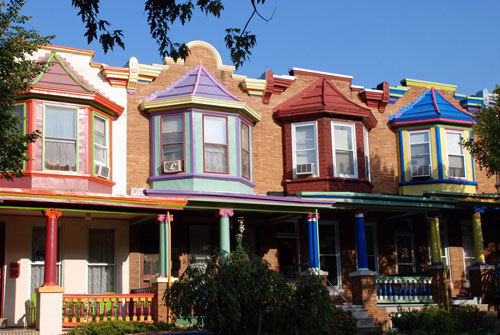 The 'Painted Ladies' are a visitor attraction for tourists and Baltimore residents alike. Photo Courtesy of Campbell McLean.

Originally known as Peabody Heights, the neighborhood was built at the turn of the 20th century and connected to downtown Baltimore by streetcar. Instead of following the city's traditional street grid pattern and building rowhouses to the sidewalk as in the more urbanized areas to the south, Charles Village has park-like boulevards and rowhouses with suburban-like front yards.

Adding to the neighborhood's distinctive character is work by the Olmsted Brothers, descendants of the famous 19th century landscape architect Frederick Law Olmsted Sr. They planned and designed the 16-acre Wyman Park Dell, creating a public space that contrasts steeply wooded slopes on the park's periphery with manicured areas and a large lawn in the center.

Ethnically and socially diverse, Charles Village is home to everyone from college students and blue-collar workers to young families and older singles.  Residents have been called "typically atypical," which makes for the unusual at times: a rusted typewriter in a local artist's front lawn or an activist gardening group that keeps tabs on unattended garden plots and tree wells. "It's not stodgy," says local resident Nancy Charlow. "That's the thing I like about the neighborhood. It doesn't take itself too seriously."

Besides its parks and the Baltimore Museum of Art, which holds the largest Matisse collection in the world, another favorite amenity of the neighborhood is the Waverly — or 32nd Avenue — Farmers Market. Held year-round, the market attracts more than 500 people every Saturday and is so busy that many vendors sell out before the five-hour market closes for the day. 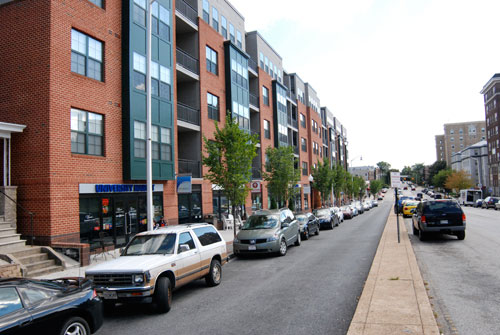 Redevelopment in northern sections of Charles Village increases the diversity of retail in the area and provides a hangout for nearby Johns Hopkins students. Photo Courtesy of John Reinhardt.

The neighborhood's physical eclecticism has transcended its boundaries, and some of the brightly colored homes have become famous symbols of the entire city. Inspired by the vibrant "Painted Ladies" of San Francisco, the neighborhood created its own through a 1998 competition to spruce up surrounding homes. Representing more than just a coat of paint, the houses underscore the importance of civic activism and pride evident in Charles Village.

The existing character of the neighborhood is preserved through upkeep provided by the Charles Village Community Benefits District. And neighbors even have a say in new development. A design committee of the Charles Village Civic Association has as its sole charge the review of plans in the North Charles Village Planned Unit Development directly adjacent to Johns Hopkins University.

As the benefits district has matured since its inception nearly 15 years ago, some residents argue that the district is no longer needed. "One of the things that brought the community together was this benefits district," says local resident Kent Waters. "As long as people are interested and actually take positions, then you've got a community rather than just a place to live." 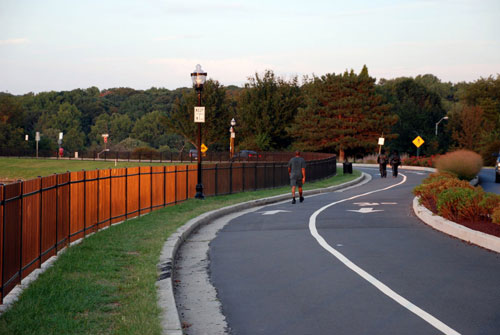 This neighborhood was first developed as a streetcar suburb in the early 20th century. Photo Courtesy of Campbell McLean.