Some considered pioneer and Civil War veteran John D. Loucks foolish to plat 40 acres in May 1882 for a town in the "Big Goose country" of north central Wyoming. The doubters didn't stop Loucks. With dramatic views of the Big Horn Mountains to the west and south, plentiful wild game in the valley, and fresh water close by, Loucks had no second thoughts.

Two years later the town named in honor of Union Army Gen. Philip Sheridan was incorporated. Today, Loucks's original plat is part of Sheridan's Downtown Historic District and surrounding town additions that APA is designating as one of its 2008 Great Neighborhoods. The neighborhood is noteworthy given its outstanding mountain views, preserved and restored historic downtown, strong identity and sense of place, and engaged community. 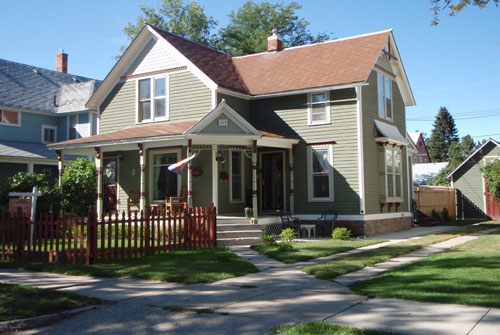 Several Victorian homes were built in Sheridan between 1890 and 1913 which have been preserved through the efforts of residents and historic preservation groups. Photo Courtesy of Elizabeth Wood.

The downtown business district and surrounding neighborhood is defined by topography, history, and mixture of Western, Eastern, and other cultural influences. Sheridan's frontier days were short-lived. Within 15 years of Loucks's arrival, a new building boom began in this regional center of commerce and continued through the 1920s. Supported by coal mining, farming, cattle ranching — and a deliberate promotion strategy targeting journalists at major daily newspapers — Sheridan's population reached 8,500 by 1910.

Nearly all of the original houses and false-front buildings along Main Street were replaced with brick, masonry, or iron-facade structures. More than 30 of these buildings remain from the late 19th and early 20th centuries, including the Sheridan County Courthouse, a part Neo-Classical Revival and part Beaux-Arts building designated a national historic landmark in 1982.

The town's original 40 acres quickly grew to include eight more additions. Victorian-styled city residences of the region's more well-to-do cattle ranchers, bankers, and businessman were built here, as well as boarding houses, and later apartments, for residents and workers. The most prominent home was John Kendrick's mansion, completed in 1913. Kendrick was a successful rancher who became a Wyoming governor and U.S. senator. His house, located on a bluff at the Trail End State Historic Site, has a commanding, 180-degree view of Sheridan and the Big Horn Mountains.

Increased attention and legal protections for historic buildings dating from the 1960s and 1970s prompted a number of well-endowed Sheridan residents to buy many of the early 20th century buildings along Main Street, explained Downtown Sheridan Association Executive Director Roger Bent. The buildings were the basis for the Main Street area's designation as a national historic district in 1982 and led the city to adopt design and historic preservation guidelines for Main Street and surrounding residential additions. 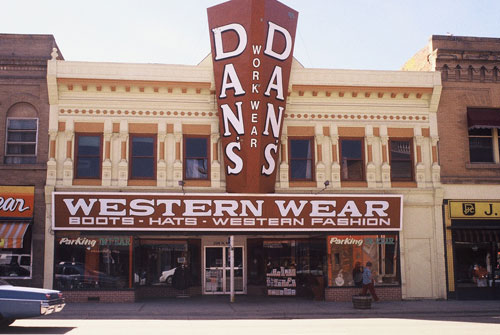 The next step was developing a Downtown Master Plan, a joint effort of the city and Downtown Sheridan Association. Approved in 1992 and most recently revised in 2001, the plan gave the neighborhood a vision and blueprint for managing change.

Several of the buildings downtown have been refurbished, such as the iron front of Dan's Western Wear store, or have been adapted for new uses, such as the ornate Romanesque Helvey Hotel and Cady Opera House, which is now occupied by Sanford's Grub Pub and Brewery.

Whitney Commons, a large greenspace adjacent to downtown, incorporates many of the elements of the Downtown Plan. Developed in the last few years by the Whitney Benefits charitable foundation, the commons hosts farmer's markets and incorporates water features and English gardens into a tranquil setting.

The Downtown Plan also suggested capitalizing on Sheridan's well-established appreciation for art. Under the leadership of former Mayor Jim Wilson and current Mayor Dave Kinskey, the city's public arts initiative has blossomed. Thirty pieces have been purchased or donated to the city and are displayed in Grinnell Plaza and elsewhere downtown. Another 27 pieces are on display through loans to the city.

"I have always hoped that ... I could go back home and lend myself wholeheartedly to a scheme of making Sheridan one of the most beautiful and attractive residential towns, not only in the West, but on the face of the earth," Sen. Kendrick wrote in 1919 to a friend while living in Washington, D.C. He didn't have that opportunity, but the community leaders and residents living here have, and they are delivering on Kendrick's dream. 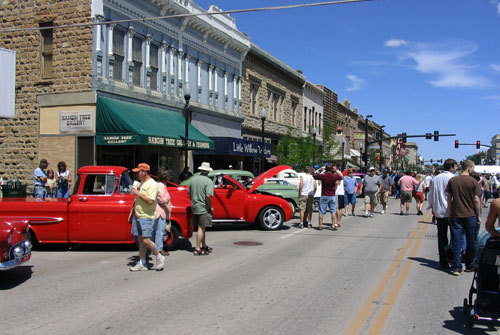