One of Los Angeles's first suburbs, the Echo Park neighborhood is a vibrant mix of cultures, incomes, architecture, commercial activity, and social activism that has retained its unique character and charm for more than a century.

Contributing to the neighborhood's eclecticism and unique sense of place — and reasons for its selection as one of 10 APA Great Neighborhoods for 2008 — are its varied topography, historic architecture, and engaged citizens who, over the years, have gone to great lengths to protect and preserve their historic arts community. 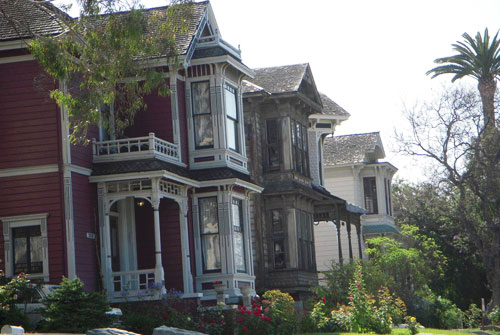 Carroll Avenue, in Angelino Heights district of Echo Park, is a quaint and historic block that includes the highest collection of Victorian houses in Southern California. Photo Courtesy of Arthi Varma.

Bounded by Temple Street to the south, North Alvarado Street to the west, Interstate 5 to the north and Park Drive to the east, Echo Park is just two miles northwest of downtown Los Angeles. The neighborhood became the set for many silent film productions made during the 1920s as the movie industry shifted to California. A number of celebrities have made the neighborhood their home, including writer Ayn Rand, actors Steve McQueen and Leonardo DiCaprio, singer Linda Ronstadt, and director John Huston.

The neighborhood's connections to the film industry aside, its first residents were by and large middle class and white. After World War II, Latinos began moving to the area and now represent more than half of the nearly 30,000 residents. Altogether, three-quarters of current Echo Park residents speak a language other than English at home.

Angelino Heights near Echo Lake is the neighborhood's most picturesque area. More than 50 Victorian homes grace this historic district, which was established in 1983 as the city's first Historic Preservation Overlay Zone. One entire block of Angelino Heights, which also includes Craftsman-style bungalows, brownstones, and Streamline Moderne architecture, is listed in the National Register of Historic Places.

The Angelino Heights Historic Preservation Overlay Zone (AH HPOZ) was expanded in 2008 and covers 235 parcels bounded by West Sunset Boulevard to the north and a local shopping destination — Echo Park Avenue — on the west.

The neighborhood's hilly terrain has not impeded building. Many houses are designed to complement the steep slopes and take advantage of views. In some cases, buildings curve in harmony with the crest of a hill. In others, front doors lead not to a street but to public stairways that enable pedestrians to traverse the neighborhood's hillsides. 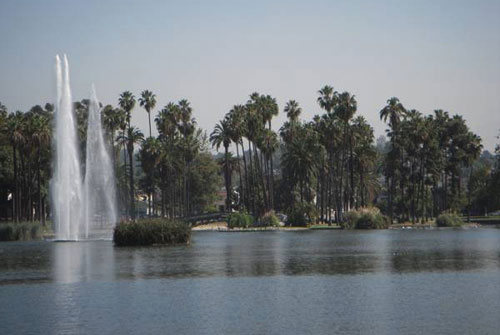 Many of the neighborhood's two dozen-plus stairways are modest, while others are landmarks that reward climbers with spectacular views of the Los Angeles skyline and Hollywood Hills. The Baxter Steps — all 230 of them — are the tallest in the city.

Unlike many areas of Los Angeles, several parks are close by including Echo Lake and Elysian Park, the city's second largest. The park at Echo Lake, home to the city's annual Lotus Festival, includes an 1896 boathouse and the 1934 Art Deco statue, Lady of the Lake.

There's been a long history of citizen activism in Echo Park. During the 1990s residents drew attention to safety issues, which has help lower property and personal crime rates in the neighborhood to approximately 20 percent below the city's average.

Residents also keep a close eye on affordable housing. Some of the neighborhood's more affordable homes have been stabilized with the help of the city-supported historic preservation efforts. In 2005, for example, the city approved a small lot subdivision ordinance that encourages the creation of several units on one parcel. To some degree the typical size of an Echo Park home — just three rooms — has helped keep prices from rising significantly compared with other parts of the city.

Such activism and meaningful community participation inspires motivation, commitment, and public debate, which are vital to keeping Echo Park a great place to live.

"For generations people have come to Echo Park, raised their families, started vibrant businesses, and given back to the neighborhood and the city as a whole," says Los Angeles Mayor Antonio Villaraigosa. "Today kids, parents, and grandparents representing numerous background and cultures come together in Echo Park, making this community an outstanding example of the great neighborhoods found throughout Los Angeles." 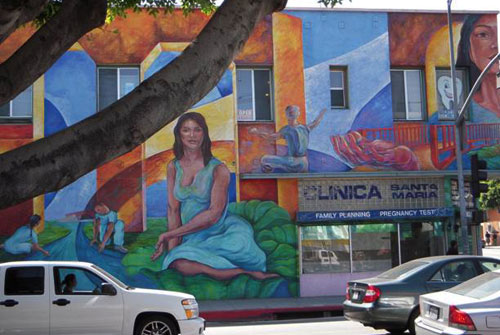