Adjacent to downtown and the state capitol, Boise, Idaho's North End neighborhood is a singular example of the American inner-ring suburb: handsome and diverse building stock; expansive, tree-lined streets; and proximity to schools, pocket parks, and amenities. Considered one of Boise's most desirable places to live, it was not always so.

Following World War II and continuing through the 1960s, North End underwent serious decline, eventually bordering on becoming a slum. A concerned, diverse coalition of local residents and community leaders joined together to plan a different outcome. For this neighborhood activism, coupled with common-sense planning and the neighborhood's enduring physical beauty and qualities, the American Planning Association (APA) is designating Boise's North End one of 10 Great Neighborhoods for 2008. 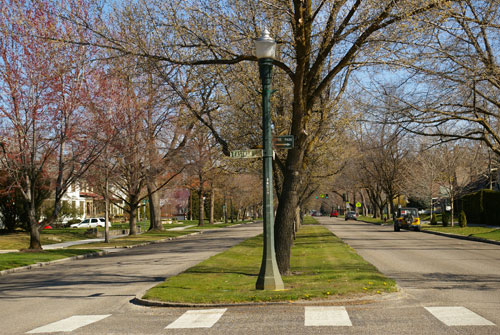 Grassy, park-like medians provide green space in view of the street, and create a canopy of tree branches above motorists and walkers. Photo Courtesy of Diane T. Kushlan, AICP.

The North End became Boise's first suburb during the late 19th century, sited on a trapezoidal plot of land between downtown, 11-acre Camel's Back Park, and rolling undeveloped foothills beyond. Although the neighborhood is rife with eclectic architecture, ranging from Queen Anne and Craftsman to Tudor Revival and Modern, it is more substantially a neighborhood of cottages with a healthy mix of multi-family housing. Street after street is lined with homes maintained in the spirit of their original design, complemented by a mature canopy of trees that shades the sidewalks below.

If the physical setting is not enough of an invitation to walk the neighborhood, then proximity to the many historic neighborhood schools, pocket green spaces, and the Hyde Park district certainly are. Moreover, through-alleys running parallel to streets provide hidden parking and service access to homes, further calming traffic and enhancing the appearance of street spaces. With its grassy parkway median and mature trees, Harrison Boulevard is North End's culminating physical feature — a testament to the enduring value of City Beautiful planning principles.

Like many other urban neighborhoods, the North End went into a sustained period of decline during the post-World War II era. Home ownership was low and many single-family residences were converted into apartment houses. Hyde Park — a beloved section of North 13th Street known today for its bike shop and several restaurants — was physically deteriorated and uninviting.

The picture began to improve with 1970s zoning changes that encouraged reinvestment. Low-interest loans through the city gave homeowners an incentive to maintain their homes, and a series of historic district designations guaranteed that the neighborhood's character would be maintained. In 1977, area residents formed the North End Neighborhood Association, a community group that was influential in getting designation for the Hyde Park and Harrison Avenue historic districts. The organization also helped convince the school district to preserve rather than demolish historic Boise High School. 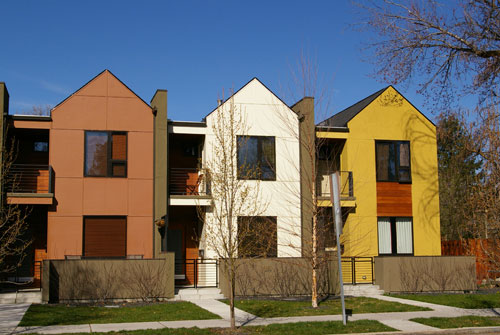 In 1981, the city's North End Plan and Hyde Park Commercial District Revitalization Project worked in tandem — and with neighborhood groups — to improve the fabric of the area. Hyde Park benefited from infrastructure improvements, lighting, and street furnishings, setting the stage for private rehab projects that help create the destination district enjoyed today. The Hyde Park Street fair, which began in 1979 as a celebration of the immediate Hyde Park area, has grown into a three-day September event that recognizes the entire North End neighborhood.

North Enders continued to be engaged. In 2002, when a block of houses was demolished in a transition area between downtown and the neighborhood, a diverse group of residents coalesced to address the matter and protect against incompatible uses. Their concerns also contributed to the city's adoption of the Near North End Conservation Overlay District.

To lessen the effects of through-traffic from new development to the north, traffic calming measures were adopted, including landscaped medians residents will maintain. By exercising ownership over these and other issues that arise, those living in North End are ensuring their neighborhood's continued vitality, longevity, and desirability. 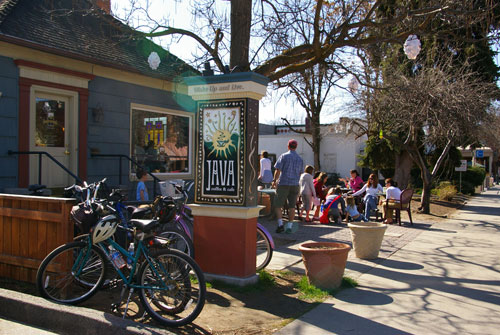