There is no mistaking Old Town, a 20-block neighborhood in downtown Wichita, Kansas. Its brick-lined streets, loft residences, public plazas, and thriving dining and entertainment establishments offer something every night of the week and contribute to the area's comeback and new identity as downtown's hot spot.

Old Town Wichita, one of 10 APA Great Neighborhoods for 2008, is singled out for the city's bold vision, astute planning, collaborative partnerships, and innovative practices that transformed a derelict warehouse and light industrial district into a bustling and successful mixed-use quarter. 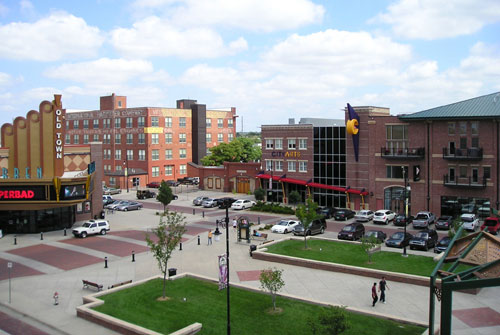 The area was born during the 1870s as a collection of warehouses that used the Atchison Topeka, Santa Fe, and Frisco rail lines that ran throughout Old Town, connecting Wichita to St. Louis, Chicago, and other points east. Old Town's railroad-lined streets served the retail and warehousing operations of several companies, including International Harvester. By 1911, Wichita was the nation's second-largest distribution point for agricultural implements.

As the country's transportation industry shifted from rail to interstate trucking, new warehouses were built at the city's edges. Many of Old Town's historic buildings were boarded up, and vacancy rates reached 70 percent.

Bringing back Old Town as a successful mixed-use district was neither easy nor quick. Community leaders, business groups and citizens, including the Old Town Association, began meeting and discussing plans to revitalize Old Town in the 1970s. Their efforts culminated with the 1983 Old Town Development Plan, which addressed urban design, opportunity sites, marketing, parking, and funding. Five years later, the city selected Marketplace Properties as the preferred developer to begin redeveloping Old Town.

That same year, routine tests found groundwater contamination in a six-square-mile area that included Old Town. Rather than seek assistance through the federal Superfund program, Wichita took financial responsibility for the cleanup by creating an environmental Tax Increment Financing (TIF) district. Until then, no U.S. city had used this approach, which earned Wichita the 1992 Innovations in American Governments Award from the Government Innovators Network at Harvard University Kennedy School of Government. 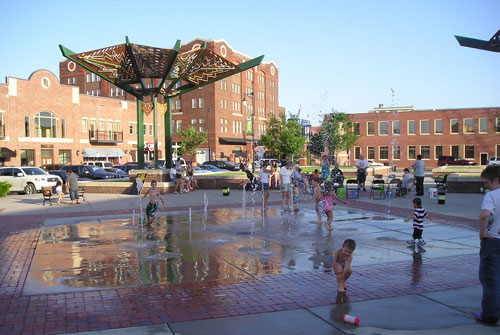 The fountain is a central feature of the Old Town Plaza. Photo courtesy Keith Wondra.

After the cleanup, several new restaurants and businesses opened in Old Town. A separate TIF district for Old Town improvements was created, and the city and Sedgwick County contributed $4 million to start street improvements, pedestrian-level lighting, sidewalks, parking facilities, and rehabilitation of the building that would house the new farmer's market.

Improvements included brick paving to preserve the historic character of the neighborhood and a parking district to promote shared parking. The city also eliminated curbs, provided wide sidewalks, and preserved the boardwalks to ensure that citizens using bicycles, wheelchairs, and strollers could easily move around Old Town. Two large public plazas were designed to host specialty events, festivals, and concerts and to serve as informal gathering places to relax and play.

By 1996, Marketplace Properties partnered with some Nebraska developers to build the first mixed-use residential project in Old Town — a three-story warehouse, now known as the Mosley Street Place. It was followed by approximately 40 condominiums and more than 160 apartment conversions, 84 of which are available at below-market rental rates, providing housing opportunities and choices for a range of household types, family size, and incomes.

In 1997, the historic Keen Kutter building was redeveloped into what is now the Hotel Old Town.  By 2003, the $7 million construction of the Old Town Warren Theatre began in the Old Town Square Addition. Old Town Square also features mixed-use buildings with retail shops, offices, and apartments and a powerful green public space with a splash park, a 500-car public parking garage, and the CityArts gallery, which offers art classes.

Old Town continues to make progress.  In 2004, the 33-acre Warehouse and Jobbers Historic District, containing more than 60 historic warehouse and industrial buildings in Old Town, was listed in the National Register of Historic Places. Recent redevelopment projects include a mechanic's shop converted into a bar and grill called the Pumphouse and a historic printing and publishing building that was transformed into the Courtyard by Marriott at Old Town.

Today Old Town is home to more than 130 businesses. Airbus's sole U.S. design and engineering facility is located on Mead Street. Property values have grown more than six-fold since 1992, and a proposal to extend Amtrak passenger service between Oklahoma City and Wichita is under consideration — another sign that Old Town's transformation might yet include something that helped define it a century ago. 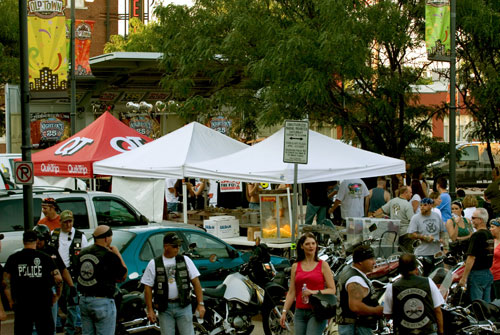