Philadelphia's Society Hill is a neighborhood of contrasts, where 18th century rowhouses coexist with 20th century apartment towers. Here, 1950s urban renewal programs were used innovatively to protect historic buildings — not tear them down — and citizen concerns led to the redesign of a freeway that would have compromised previous historic preservation efforts.

Given the area's blend of historic charm, smart mid-century and modern-day planning, and social diversity, the American Planning Association (APA) has designated Society Hill as one of 10 Great Neighborhoods for 2008. 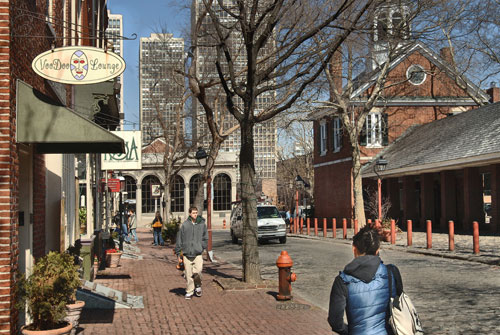 The Headhouse, the Shambles and Towers properties overlook several shops in Society Hill. Photo by Dick Gouldey, City of Philadelphia.

Part of William Penn's original plan for the City of Philadelphia, Society Hill is a kaleidoscope of development patterns, styles, and peculiarities spanning more than three centuries. The resulting downtown neighborhood is dense, fine-grained, and walkable — and a model for sustainable urban living in the present.

Laid out in the last quarter of the 17th century, Society Hill encompasses Washington Square, one of four central parks in William Penn's original grid plan of Philadelphia. The neighborhood abuts the Delaware River, which it overlooks from a hill named for the Free Society of Traders — a company chartered in 1682 by Penn and the namesake of Society Hill.

The neighborhood flourished as a residential and commercial district into the 19th century, as fashionable Georgian and Federal style homes were built alongside taverns, market halls, and churches. Subsequent population movements and Philadelphia's western expansion caused the neighborhood to decline in the 20th century.

By the 1950s it was a slum, home to disadvantaged classes living among manufacturing and distribution facilities. Toward the end of that decade, local leaders recognized the potential of Society Hill to become a centerpiece of Philadelphia's revitalization and beautification. An innovative plan was developed to improve the neighborhood while at the same time preserving its historic architecture.

The city's Redevelopment Authority, working closely with a newly established Historical Commission, acquired hundreds of dilapidated properties and sold them inexpensively to owners who would restore them according to strict standards. It was a "revolutionary and very exciting" period, remembers long-time Society Hill resident Stanhope Brown, who bought and restored one of the houses. 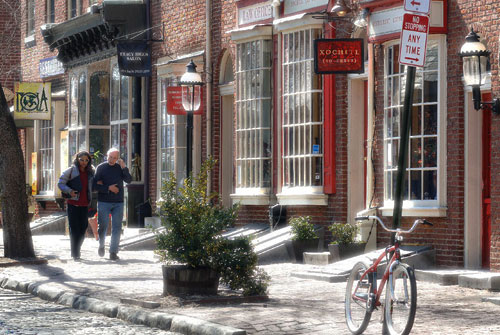 The city's redevelopment program was a noteworthy marker towards the end of a period begun in the 1920s and 1930s by New Orleans, Charleston, and other local governments undertaking preservation before the federal National Historic Preservation Act was enacted in 1966. Under the leadership of planning director Edmund Bacon, the program included development of sensitively scaled and designed infill housing that featured walkable mid-block "greenways" and public art. Modern architect I.M. Pei's Society Hill towers, a trio of 26-story apartment buildings adjacent to the river that included shopping facilities, were built during this time and injected new ideas about architecture and urbanism.

The Society Hill Civic Association, created through the merger of two smaller community groups in 1965, also played a critical role in maintaining the neighborhood's integrity. The organization was instrumental in convincing highway engineers to route U.S. Interstate 95 along the river but below grade rather than allowing it to slice through the city and cut off Society Hill and its new historic district.

Today, a large plaza covers I-95 between Dock and Spruce Streets, and pedestrians have safe access to a city park and promenade along the river. The association remains active, maintaining and improving pocket parks and monitoring development in the area.

Today, Society Hill continues to be one of Philadelphia's most desirable residential neighborhoods. Historic institutions, including churches and a hospital, still exist, complementing an atmosphere of mature trees, granite block streets, and brick sidewalks. A new farmer's market occupies the spot where a very old market had once stood, and reproduction "Franklin" street lamps provide for pedestrian safety without compromising historic integrity.

Society Hill continues to be a stimulating confluence of historic charm and architecture, varying scales, mixed uses, and social diversity that creates an extraordinary place to live, work, or visit. 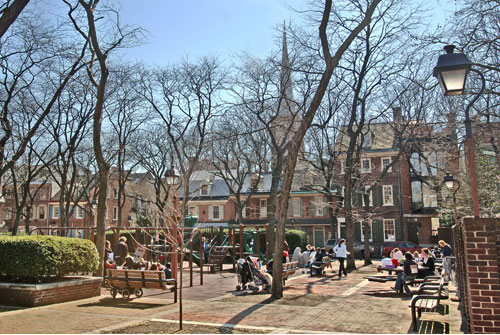 Surrounded by traditional homes, and within view of a church spire, parents relax and children play in Three Bears Park. Photo by Dick Gouldey, City of Philadelphia.