The most culturally diverse neighborhood in Spokane, Browne's Addition is a mosaic of past and present. Stately mansions are juxtaposed with low-rise apartment buildings and condominiums. Residents — some here by choice, others by necessity — appreciate the neighborhood's proximity to downtown and its recreational opportunities and physical beauty. The grocery store is an easy walk from residences as is the coffee shop, restaurants and pizza parlor. An increasingly vibrant pedestrian realm has created a strong sense of community and provides opportunities for neighbors to mix and mingle.

Its north and west boundaries are defined by the contour of a high bluff that overlooks the confluence of the Spokane River and Latah Creek.

The south and southeasterly edges are marked by Sunset Boulevard and the Northern Pacific Railroad embankment. Maple Street serves as the eastern border.

Home to an active citizenry and faith-based institutions, Browne's Addition has emerged from a lengthy period of decline with renewed vitality and a constituency that is committed to the neighborhood's success. 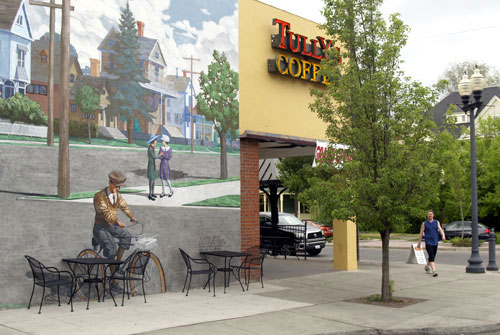 Depicting the historic nature of Browne's Addition, this mural brings life to what otherwise would be an uninteresting blank wall. Photo courtesy Cat's Eye Photography. 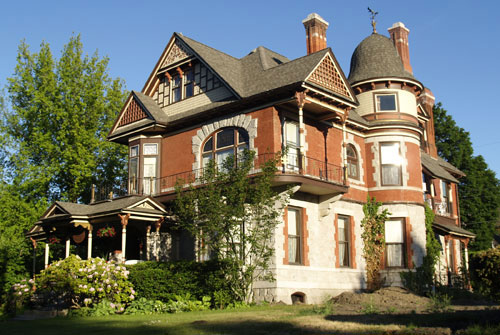 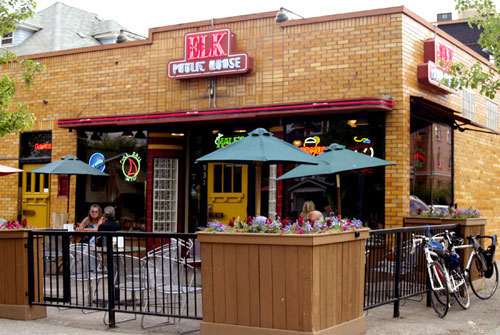 Residents of Browne's Addition can meet both their daily and entertainment needs within the boundary of the neighborhood. Outdoor seating at this pub adds to the street life. Photo courtesy Cat's Eye Photography.