Haymarket owes its vitality as much to the variety of uses that permeate this former warehouse district as to the careful restoration of individual buildings. Haymarket draws on its railroading and wholesaling heritage to attract visitors from throughout the community and across the state. Haymarket also is home to several hundred residents, with housing ranging from luxury lofts to subsidized rental units. Residents and visitors appreciate the area's numerous amenities including public art and a weekly farmers market.

Haymarket consists of 10 blocks, bounded by "S" Street on the north, "N" Street on the south, Ninth Street on the east, and Lincoln Station (formerly the Chicago Burlington & Quincy Railroad Depot) on the west. Six blocks at the core of the area are formally designated as Haymarket Landmark District.

Compact and easily covered on foot, the neighborhood is dominated by pedestrian traffic, but also is driver-friendly. With strong indoor and outdoor spaces, Haymarket is busy all four seasons. It is adjacent to two major centers of activity — the University of Nebraska campus and the traditional downtown, also a thriving part of the city. With some two dozen restaurants plus taverns, two live theater venues, shops, galleries, and offices, the neighborhood is a lively place 24/7. 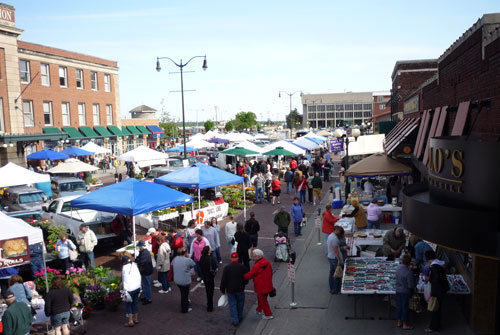 The Haymarket Farmers Market brings 7th Street alive, drawing people not only from downtown Lincoln but other neighborhoods as well as towns in Nebraska. Photo courtesy Lincoln Planning Department.

The view from this plaza illustrates the character of the Haymarket's past as a former manufacturing district. Today, some two dozen restaurants, taverns, shops, galleries, and offices draw people to the neighborhood to live, work, and play. Photo courtesy Lincoln Planning Department. 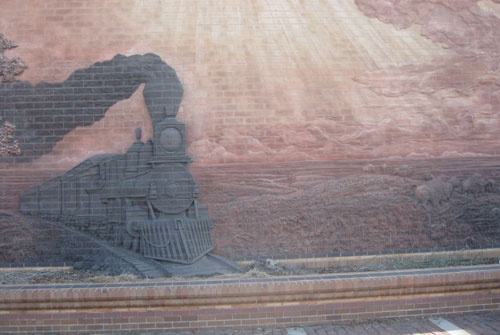 Public art such as this train mural is a reminder of the Haymarket's close ties to the railroad yard located adjacent to the neighborhood. Photo courtesy Lincoln Planning Department.