Long recognized for its heritage and architecture, Ninth Street Hill is known today as much for its community activism as its historic attributes. Residents here believe that preservation is the result of not only bricks-and-mortar maintenance, but vision, enthusiasm, and teamwork. 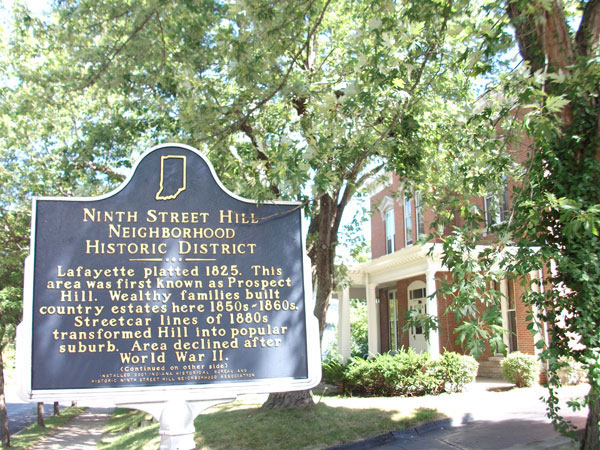 Listed on the national and local register of historic places, Ninth Street Hill boasts over 80 architecturally significant houses, some dating to the mid-19th century. Photo courtesy of Emily Gross.

Long recognized for its heritage and architecture, Ninth Street Hill is known today as much for its community activism as its historic attributes. Residents here believe that preservation is not just the result of bricks-and-mortar maintenance, but vision, enthusiasm, and teamwork.

Platted by a river trader in 1825, Lafayette was intended to be a shipping center on the Wabash River. It was the 1853 arrival of the railroad, whose tracks border the neighborhood, that cemented the city's regional prominence. Stunning country estates with rear carriage houses, expansive front lawns, iron fences and brick sidewalks were erected in nearly every style of domestic architecture from the mid-19th to mid-20th centuries.

During the Depression, some homes were altered to take in boarders, and others carved out small apartments to house returning servicemen after World War II. By the 1960s, families flocked to the suburbs, and many of the neighborhood's houses became rentals — some with multiple apartments. As Ninth Street Hill fell into decline, several landmark structures were razed.

The 1986 formation of a neighborhood association by determined residents served as a catalyst for beautification, preservation, and safety efforts. As families returned to Ninth Street Hill, the association expanded its calendar of events to meet the needs of residents from many generations.

While two historic homes were added to the National Register in 1971 and 1984, it was the Ninth Street Hill Neighborhood Association that pushed through local and national historic district designation, development of a neighborhood-specific plan, and zoning changes. These efforts not only have stabilized this historic area, but they transformed Ninth Street Hill into one of the country's most welcoming, attractive, and active neighborhoods. 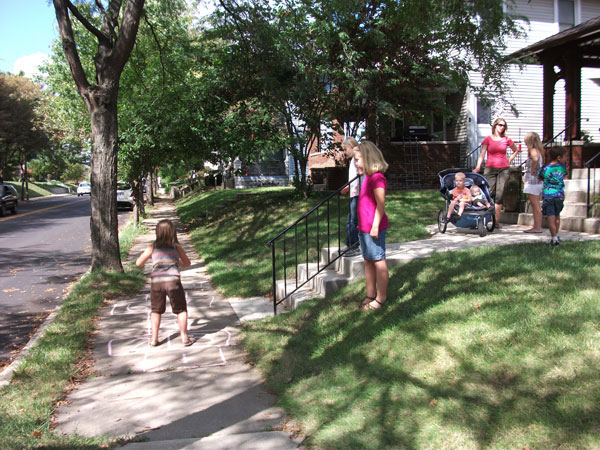 Like many urban neighborhoods, Ninth Street Hill fell into decline after World War II. The formation of a neighborhood association in the 1980s served as a catalyst for beautification, safety, and preservation efforts. Today, the neighborhood is alive with street-side activity. Photo courtesy of Emily Gross. 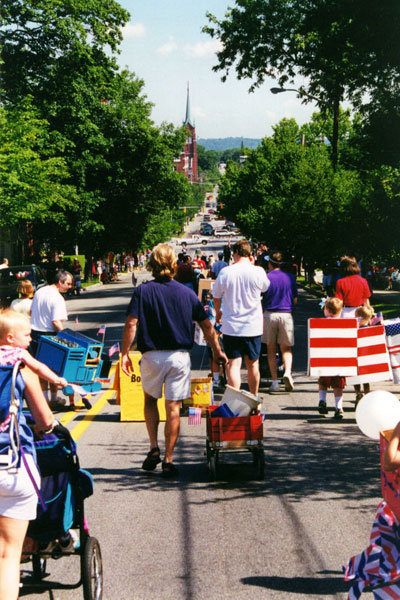 Residents young and old march down the hill as part of the Festooned Fourth Box Parade, one of many events put on by the neighborhood association. Photo courtesy of Jane Boswell.