Spectacular vistas, superb architecture, and active residents distinguish the Gold Coast-Hamburg Historic District, among Iowa's oldest residential neighborhoods. Bluffs overlooking the Mississippi River afford unsurpassed views of the water, Davenport's downtown, and the Illinois side of the Quad Cities. Lining the neighborhood's streets are some of the city's largest and most opulent houses, built between 1840 and 1910 by prominent citizens, many of them German. 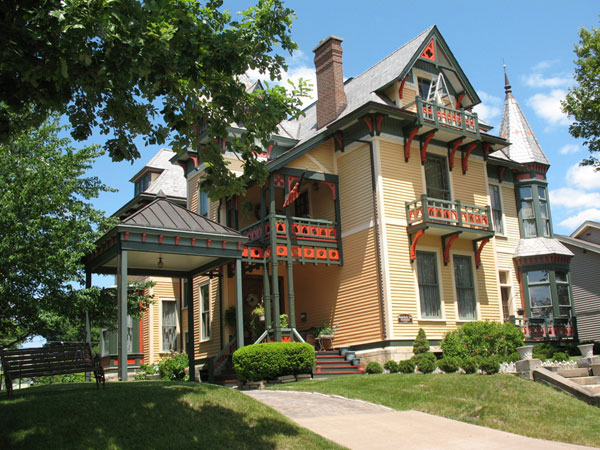 This Gothic Revival home, built by the grandfather of legendary jazz musician Bix Beiderbecke, is now a bed and breakfast. Photo City of Davenport.

Gold Coast-Hamburg residents, among the city's most active, have earned a reputation for volunteerism and leadership. Their collective donation of thousands of volunteer hours, which led to the rescue of dozens of historic buildings, contributed to the area's selection for development of Davenport's first neighborhood plan.

Comprising 1,060 acres, the Hamburg Historic District went through a long period of disinvestment in the mid-20th century. As the cost of maintaining large homes increased and the popularity of city living declined, houses were converted to multi-unit rentals. Urban pioneers gravitated to the district in the 1980s when the neighborhood began a period of recovery. In 1983, it was added to the National Register of Historic Places.

It was at this time that many rental houses were restored to their original single-family grandeur through grassroots efforts and local incentives. Although some of the historic houses have been lost, nonprofits, individuals, and the city have worked to preserve the streetscape by limiting demolitions, funding renovations and landscaping vacant lots.

Recognizing that reuse is a cornerstone of smart growth, residents have diverted tons of materials from landfills. A recently rehabbed store serves as an architectural salvage shop. Sustainability drives choices, such as the recent decision to use energy-efficient, period lighting along Gaines Street, a main thoroughfare linking downtown and St. Ambrose University. 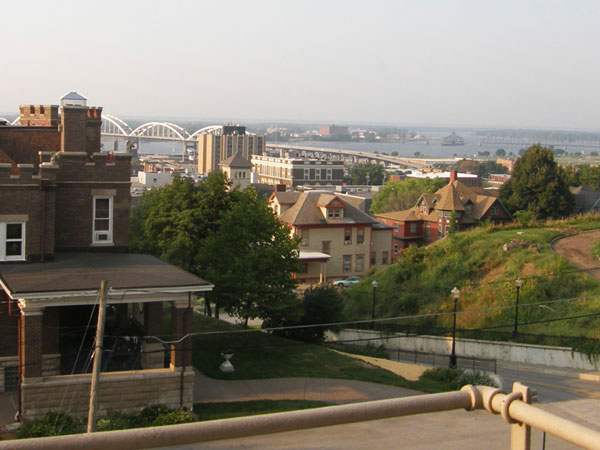 The steep bluffs offer stunning views of the Mississippi River from many neighborhood homes. Photo City of Davenport. 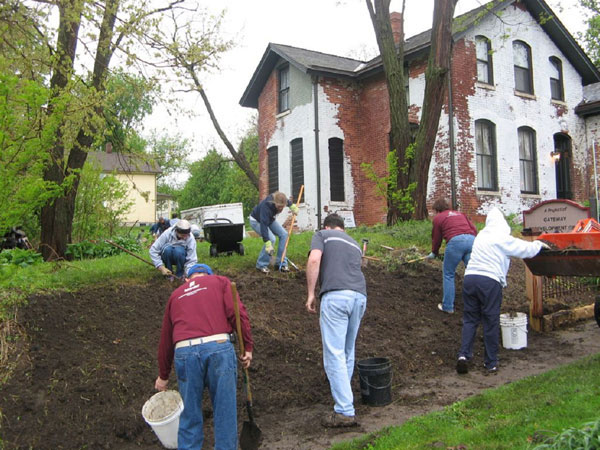 Neighbors and volunteers partner to clean up the Jipp property, a former grocery store and residence now owned by Gateway Redevelopment Group and operated as an architectural salvage store. Photo Marion Meginnis.