The unique sense of place found within this ethnic enclave comes not only from the architecture and compact street grid but a cultural identity that has persevered for more than 160 years. Despite its reputation as a tourist attraction — it is San Francisco's third most-popular visitor destination — Chinatown is an immigrant gateway and cultural capital, a touchstone for Chinese throughout America as well as the 150,000–plus San Franciscans of Chinese heritage. 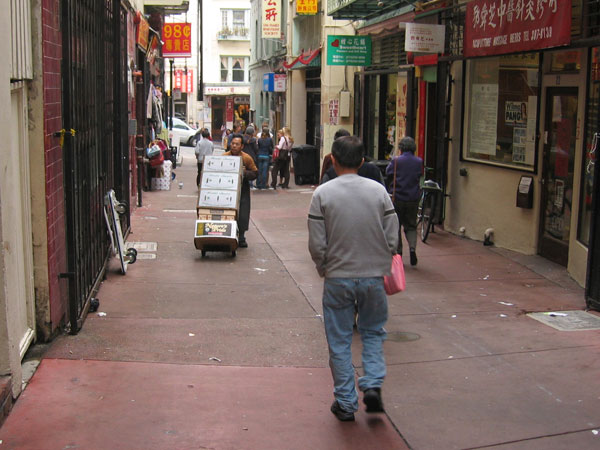 That skyline escaped physical damage from the 1989 Loma Prieta earthquake, but the resulting demolition of the Embarcadero Freeway in 1991 led to a seven percent drop in sales tax (1998-2007). Business and community groups rallied, creating events and promotions. Most recently, from 2006-2012, the Mayor's Office of Economic and Workforce Development reports a 21 percent increase in sales tax.

The neighborhood dates to 1846, when an American flag was raised in Portsmouth Square, one of several popular community open spaces. An influx of Chinese in the 1850s, due in part to the Gold Rush and railroad jobs, gave rise to a 12-block area that by 1880 would be home to 22,000. Today, 14,500 people, 75 percent of them foreign born, call Chinatown home. An equal number travel into Chinatown each day for community services, shopping, and socializing. Many come by bus, which will be augmented by train service when a subway station opens in 2019.

Chinatown grew organically through the late 1960s when the International Hotel, home to low-income Chinese and Filipino immigrants, was targeted for demolition as part of urban renewal. In January 1977, the courts upheld the eviction of residents and some 5,000 people protested, laying the groundwork for heightened community involvement in neighborhood development, especially affordable housing. In 2005, a new 105-apartment complex for low-income and senior residents opened on the site.

The neighborhood has a long standing history of affordable housing units, much of it the result of public and private efforts. The Ping Yuen Public Housing development was built in 1952, and the Mei Lun Yuen housing project opened in 1982. Roughly 40 percent of housing is single-room occupancy, which contributes to the neighborhood's sustainable character, as does the low level of household car ownership — less than 20 percent.

The high level of pedestrian activity has been an important part of the neighborhood's alleyway and streetscape improvement plans created since the mid–1970s, when development in the nearby Financial District threatened Chinatown. The Chinatown Community Benevolent Association created and published in Chinese "A Plan for Chinatown," while the Chinatown Community Development Corporation Center and Chinese Chamber of Commerce collaborated on the "Chinatown Community Plan." Both would influence the city's 1986 Chinatown Rezoning Plan, which downzoned large portions of the neighborhood to protect the single-room occupancy housing stock and create incentive zoning with height bonuses for affordable housing. Community participation continues today and is evident in the design guidelines created to accompany development of the new subway station in this compact, tight-knit community. 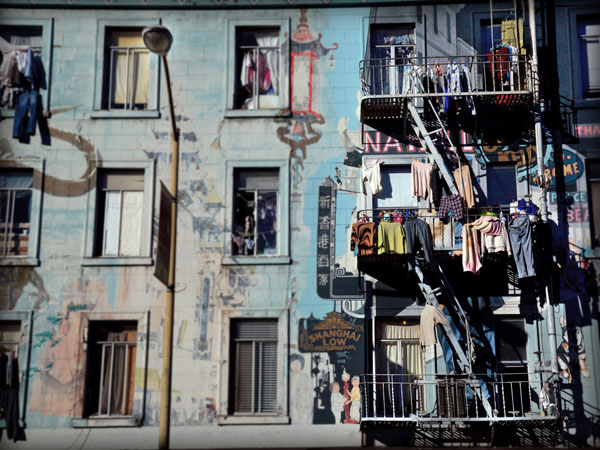 The facade of one of Chinatown's residential buildings displays an East Asian inspired mural, adding to the neighborhood's rich sense of place. Photo courtesy Chinatown CDC. 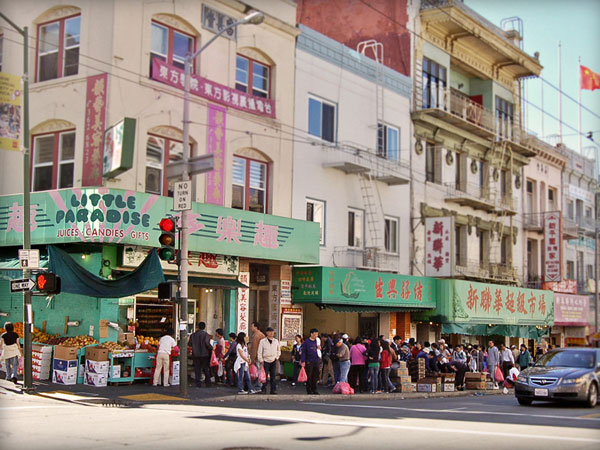 Stockton Street is one of Chinatown's busiest and most vibrant streets, and is home to several Asian companies such as the Hop Hing Ginseng Company and the Kowloon Market. Photo courtesy Chinatown CDC.