Reminiscent of a sleepy rural hamlet but with decidedly more urbane architecture and scenic vistas, Kenwood Addition is both engaging and engaged. Its residents have a deep appreciation of their neighborhood's history and assets and just as strong a desire to honor and protect them. 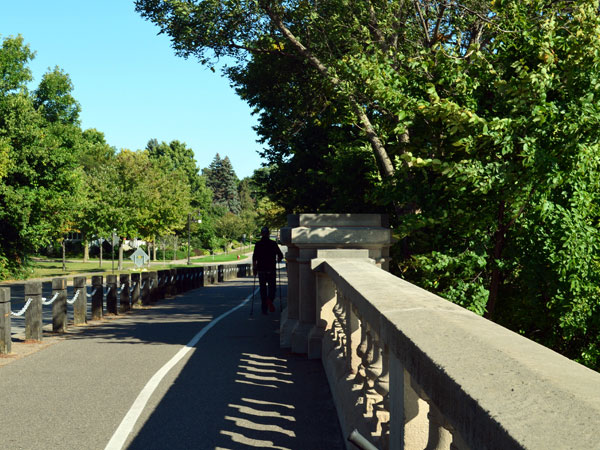 Built as a streetcar suburb near the end of the 19th century, Kenwood's park-like setting is reinforced by a canopy of stately trees, three nearby lakes, a park encompassing a third of the neighborhood's 95 acres, sidewalks, and a curvilinear street pattern. The sloping terrain offers superb views of the surrounding water and downtown Minneapolis skyline roughly two miles to the northeast. Kenwood's elevation, well above the low, mosquito-infested marshes and wetlands that composed Lake of the Isles original shoreline, was key to the area's early settlement. Minimum house construction costs were $3,000, and some — like an 1892 Queen Anne at the corner of West 21st Street and Kenwood Parkway — cost five times that amount.

Kenwood Parkway, a central link in the city's boulevard system designed by H.W.S. Cleveland, was a popular route to the lakes from downtown. A bike path, distinct from the carriage paths, was added in 1895. It wasn't until 1957, however, that the parkway was paved and curbs and gutters installed. The parkway feeds into Lake of the Isles Parkway, which is part of the Grand Rounds, a National Scenic Byway and a 2009 American Planning Association Great Public Space.

Probably the most familiar house on Kenwood Parkway s is the old Victorian that was featured in the opening of the 1970s sitcom The Mary Tyler Moore Show. Like the house on the show, this one had been divided into apartments, which was not unusual in Kenwood during the 1960s and 1970s. Since then the house, like most others in the neighborhood, has been reconfigured as a single-family residence. Roughly 85 percent of Kenwood's 540 homes are owner occupied.

Next to Lake of the Isles, the neighborhood's single largest feature is the 33-acre Kenwood Park. Acquired in 1907 for $162,000, the park remains mostly in its natural state. Tennis courts were added in 1913 and upgraded with private funds in 2007. A playground, now being renovated, was installed across from Kenwood Elementary School in 1996. That same year, residents unsuccessfully fought the siting of antennas on the Kenwood Water Tower, a designated city landmark. That landmark status followed an unsuccessful 1979 attempt to convert the tower, unused since 1954, into condominiums.

The latest issues to draw neighborhood scrutiny involves expansion of Metro Transit's light rail system to include the Southwest Transitway connecting downtown Minneapolis with Eden Prairie. The corridor under consideration includes a light rail station next to Kenwood Park. The Kenwood Isles Area Association (KIAA) is working with city planners to mitigate potential impacts — light and noise pollution, vibration, increased vehicular traffic, reduction in parkland and trails, and limited pedestrian access to East Cedar Beach — and ensure that the station's design is compatible with the neighborhood's park-like setting. Construction is proposed to begin in 2015 with the line opening in 2018. 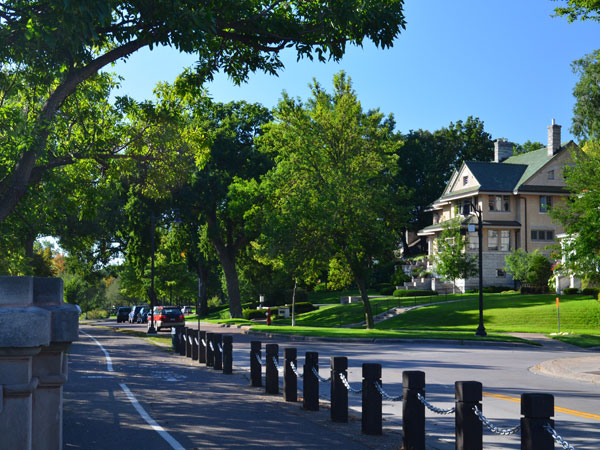 Houses designed in both the Queen Anne and Victorian styles are found along Kenwood Parkway. Photo courtesy Brian Schaffer. 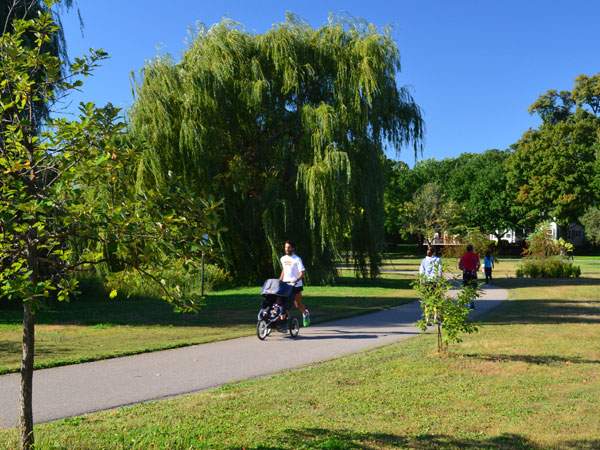 The 33-acre Kenwood Park, located next to Lake of the Isles, includes tennis courts and a recently renovated playground. Photo courtesy Brian Schaffer.