Kansas City, Missouri's Crossroads Arts District is a vibrant hub of creativity and entrepreneurship. The Crossroads is home to hundreds of art-focused entities and tech startups that traverse all disciplines. 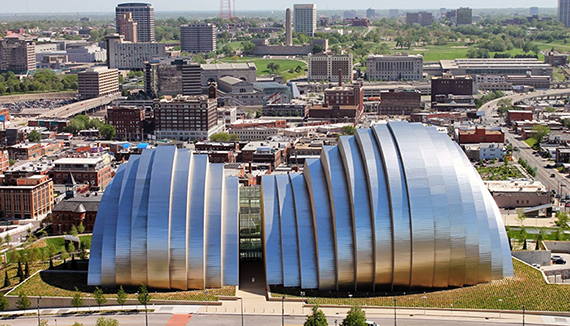 The Kauffman Center for the Performing Arts is a centerpiece of the Crossroads neighborhood. The center hosts an array of fine arts performances, including music, opera, and ballet. Photo City of Kansas City.

The Crossroads is best known for its arts and entertainment culture — from the upscale to the extreme, visitors will find an array of artistic expression within a few walkable blocks. The iconic Kauffman Center for the Performing Arts is set in the northwest corner of the arts district. The center showcases a variety of performances including symphonies, operas, ballets, and concerts in addition to comedians, special guest speakers, and conferences. The Crossroads also hosts a First Friday event each month which gathers the community together in celebration of local artists, art organizations, and local businesses.

In 2012, Kansas City was the first metro area to receive Google Fiber. This citywide initiative has jump-started the connection of residents and business with high-speed web services and tech collaborations that have flourished in the Crossroads. Because of its central location, the Crossroads has attracted many technology companies, which have created jobs and bolstered economic development in Kansas City and the surrounding region.

Many buildings within the arts district are listed on the National Register of Historic Places. 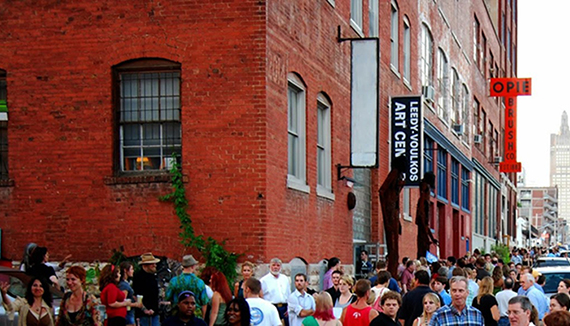 One particular point of pride in the Crossroads Arts District is First Fridays, a large arts festival held the first Friday of each month. All kinds of local artists, buskers, performers, and restaurants take to the streets in the open-air festival that brings about 10,000 people into the district. Photo City of Kansas City.

The Crossroads merges creativity, technology, and heritage into a melting pot of economic development. The district continues to thrive in large part because of strong collaborate partnerships between city leaders, artists, entrepreneurs, and residents.

Hundreds of millions of dollars of economic development projects are under construction or have been recently announced in the Crossroads Arts District, including condominiums, apartments, businesses, and three hotels.