In the sprawling metropolis that is Phoenix, Roosevelt Row has emerged as a pinnacle example of how good planning can relieve some of the negative effects that come with horizontal expansion. Historic single-family and multifamily homes highlight the unique southwestern architecture and give distinct character to Roosevelt Row. Additionally, transit-oriented infill development and a vibrant arts scene have made Roosevelt Row a highly desirable place to live, work, and visit.

Roosevelt Row's boundaries are referenced as anywhere within 15 minutes walking distance from the Light Rail Station at Central and Roosevelt. These roughly extend to 7th Street, 7th Avenue, McDowell, and Fillmore. 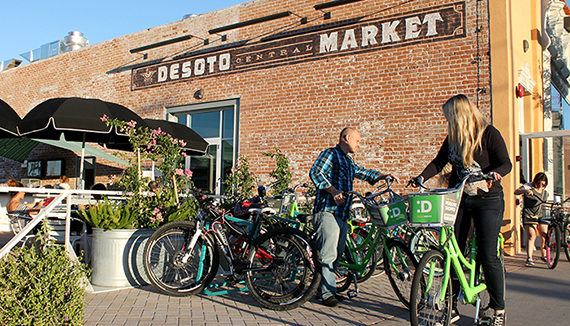 Cyclists park their GRID Bikes at the DeSoto Market, a collection of local shops that came together in a rehabilitated space. Photo Brandi Porter.

This diverse community has experienced an incredible transformation in its arts scene and economic development over the past 10 years. Roosevelt Row has a strong Latino presence that is reflected in its murals and local artwork. The area hosts theater, performance, live music, and visual arts throughout each month. Gallery openings are held once a month on every Third Friday. More than 20,000 people attend First Friday, allowing local artists and vendors to be showcased on streets closed to cars, and residents gain a new perspective of the neighborhood on foot.

A light rail system, which has outperformed expectations, helps connect Roosevelt Row to many other parts of the metro area and has also spurred denser growth. From its earliest days, Roosevelt Row has been a vital mixed-use area. Other sustainability-focused initiatives like a bike share and adaptive reuse all contribute to the innovative character of the district.

In 2002, community members started advocating for changes that would bring a stronger pedestrian focus to the streets in the Roosevelt Row neighborhood. East Roosevelt Street between Central Avenue and Fourth Street is in the heart of the neighborhood. After nearly 10 years, this corridor in downtown Phoenix is a Complete Street, featuring a bike lane and wider sidewalks lined with trees, new outdoor patio dining, and public art. The second phase of the project will begin in the fall of 2015. These improvements have come from community members who are invested in creating more opportunities for pedestrians and local businesses in Roosevelt Row. 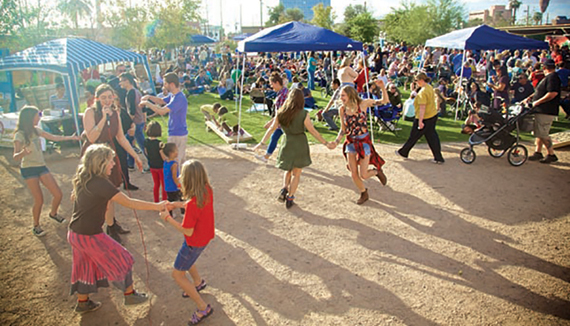 There are a number of events that bring the local and surrounding communities together in Roosevelt Row. Here, people celebrate the Pie Social. Photo Andrew Pielage.

Roosevelt Row is a strong example of bringing density, transit, and an eclectic mix of arts and culture back into a neighborhood adjacent to Phoenix's Central Business District. 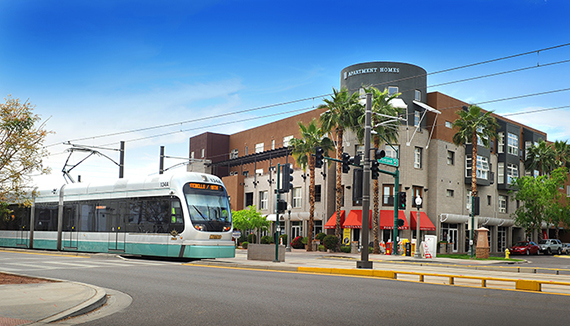 The Light Rail in Phoenix has contributed greatly to both infill development and access to Roosevelt Row. Photo Valley Metro.