Built more than a half-century ago through the Mellon Family's civic philanthropy and efforts to jump-start private investment and revitalization in downtown Pittsburgh, Mellon Square has stood the test of time, marking it as one of the country's most enduring and outstanding places.

One of 10 APA Great Public Spaces in America for 2008, Mellon Square creates a definable space that improves the plan, design, and functionality of Pittsburgh's central business district. It's both the public stage and the open air space that affords both panoramic and individual views from not only the square but also the surrounding buildings themselves, many of which are historic and architecturally significant. 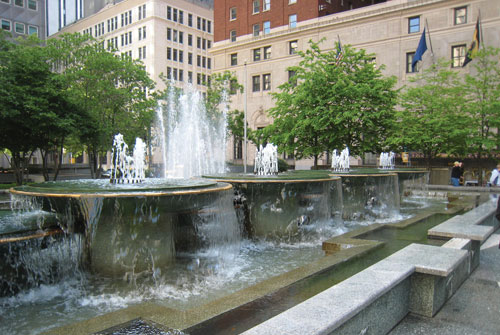 Built at a time when cars began to dominate American streets and highways, Mellon Square is the oldest surviving public space above a parking garage. Listed as a National Historic Place in 1985, the square's use of tree and bush planters are a forerunner of today's green roof designs, providing pervious surfaces to absorb water and decrease polluted runoff.

Underwritten by three Mellon Foundations, local banker Richard King Mellon developed the park to discourage the Aluminum Company of America (Alcoa) from relocating its headquarters to New York City, encourage additional revitalization in the area, and provide a memorial to Richard King's father, Richard B. Mellon, and his uncle, Andrew Mellon.

Completed in 1955, Mellon Square sits atop an underground parking garage on Smithfield Street between Oliver and Sixth Avenues. Encompassing just 1.37 acres yet still feeling expansive, the square functions like an enclosed garden because it is raised above street level. "It is a bounded place set apart from everything outside it," writes Carnegie Mellon architectural librarian and archivist Martin Aurand in his book, The Spectator and the Topographical City. As a result, the noise and views of traffic are reduced and the surrounding buildings seemingly create a visual wall around the perimeter.

Not only does Mellon Square connect the varied styles, types, and scales of the surrounding skyscrapers and architectural landmarks, but the square itself is visually captivating. It is a striking example of Modernism with its triangular-patterned paving and asymmetrical order of planters, bronze fountains, and granite benches. Paved with marble from Belgium, Italy, and Maryland, the square is planted with mature American Sweetgum trees. 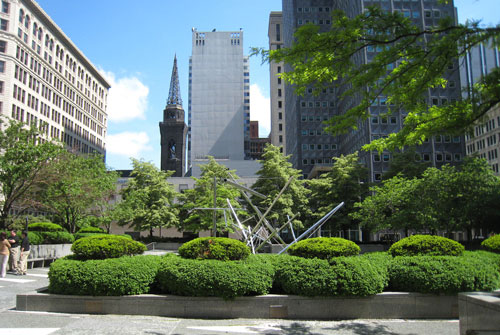 Highly accessible by car, foot, and below-grade rapid transit, Mellon Square links to the street network of the central business district, aiding in its connectivity. The square draws large crowds, including tourists, drawn to its splendor and location amidst the commercial and retail buildings and the Landmark William Penn Hotel. A venue for concerts and occasional rallies, its primary function is providing an urban oasis that offers those working, shopping or visiting downtown Pittsburgh with a public space to gather for lunch and reflective enjoyment of the surrounding cityscape.

The city of Pittsburgh, Mellon Foundations, and the Pittsburgh Parks Conservancy understand that they have a truly outstanding public space, recognizing the importance of maintaining the square close to its original form and purpose. In the early 1990s, for instance, the square's landscape architect John Ormsbee Simonds was consulted on a restoration project to ensure the work followed his original design.

In addition, the Richard King Mellon Foundation continues its philanthropy and support for the square, having recently donated $100,000 in 2007 to the Pittsburgh Parks Conservancy to support a public planning, design, and management program for the square with the Pittsburgh Department of Public Works.

Mellon Square captures the elements of what Simonds believes necessary for urban public spaces. Such places, he said, "must give the welcome relief of foliage, shade, splashing water, flowers, and bright color. Like the oasis it is, the urban park must be a place of pure delight — an inviting refreshing environment." 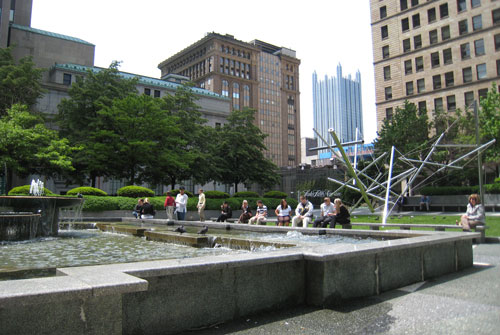