It is the birthplace of "beach culture," a place where human theater unfolds daily against the backdrop of the Pacific Ocean. For nearly 120 years, Santa Monica Beach in Santa Monica, California, has been the dynamic link between the natural and man-made worlds, providing equal access to all who wish to congregate near this part of the coast.

Offering spectacular views, opportunities for recreation and social interaction, and a touch of history and culture, Santa Monica Beach, known formally as Santa Monica State Beach, is one of 10 APA Great Public Spaces in America for 2008. The designation stems from the beach's commitment to accessibility, environmental stewardship and historic preservation, and maintaining its distinctive character. 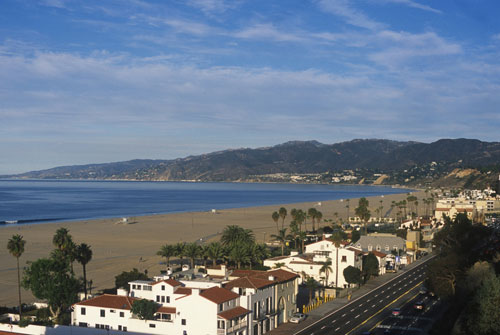 The beach stretches 3.5 miles along the Southern California coast from Malibu to Venice. The Palisades Bluffs loom to the east; the Pacific beckons to the west. Featuring 245 acres of sand, the beach is a series of linear parks, with playgrounds, pedestrian and bicycle pathways, a restored historic pergola and gazebo, native landscaping, and the iconic palm tree.

Up to 50,000 people enjoy the beach on a typical summer day — 5 million visit annually — making it one of the region's most treasured public assets. Some come by car or bus. Others walk, bike, skateboard, or rollerblade. Light rail may eventually bring beachcombers from inner Los Angeles.

The beach is known for its commitment to public access. When racially restrictive covenants were common in the 1920s, Santa Monica was home to one of the few beaches open to people of all colors. Today wooden boardwalks provide wheelchair access. The development of Leadership in Energy and Environmental Design–certified (LEED), American Disabilities Act–accessible restrooms is under way.

In 2009, the LEED-certified Annenberg Community Beach House will open. Funded by a $27.5-million grant from the Annenberg Foundation at the recommendation of Wallis Annenberg, it will provide the public with an experience previously reserved only for those with membership at an exclusive club.

Despite its history of success, Santa Monica's coastline languished during the 1970s and 1980s. In 1973, the city council voted to tear down Santa Monica's pier, but concerned citizens saved it from destruction. Such activism prompted city leaders to create the Historic Site Committee and to develop preservation standards and procedures. The standards laid the groundwork for the 1976 Historic Preservation Ordinance and establishment of the city's Landmarks Commission. 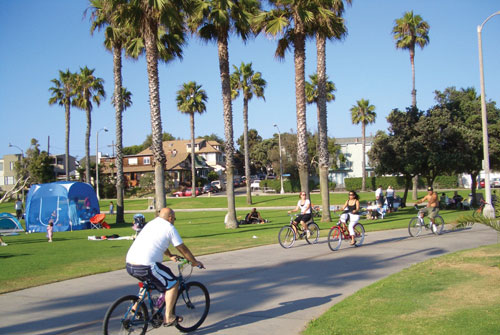 Santa Monica Beach consists of two beaches. North Beach is characterized by an abundance of sand and sweeping views of Santa Monica Bay. South Beach is alive with sites such as the Santa Monica Pier. It is here that the modern "beach culture" — surfing, beach volleyball, rollerblading, lifeguards, skateboarding, and spectacular sunsets — got its start. Two luxury hotels serve as counterpoints to populist activities at Muscle Beach and Chess Park.

A proposal for a large-scale luxury resort rallied citizen opposition in 1990. A successful ballot initiative created a Beach Overlay District to preserve the balance and scale of developments within Santa Monica's Coastal Zone.

Several projects in 2000 successfully implemented the master plan. The Beach Improvement Group, a team composed of planners, engineers, and a public artist, oversaw the completion of $2.6 million in improvements. These included landscaping, separate pedestrian and bicycle paths, public art, and enhancements to the beach's "people places" — Chess Park, the promenade south of Santa Monica Pier, and Muscle Beach — that set the stage for human interactions.

Recently, Measure V has paved the way for projects to improve the water quality of the bay. The Urban Watershed Management Plan is guiding the modification of the existing storm drain system to reduce runoff entering the bay. A pilot Beach Greening project converted a beach parking lot to turf to capture runoff and provide much-needed space for soccer recreation. The turf can be used for parking when demand is high.

For those unable to visit, views of the beach can be seen in countless movies and television shows including Forrest Gump, Baywatch, and Beverly Hills 90210. The most photographed beach in California, Santa Monica Beach holds a special place in the collective consciousness of residents and visitors. 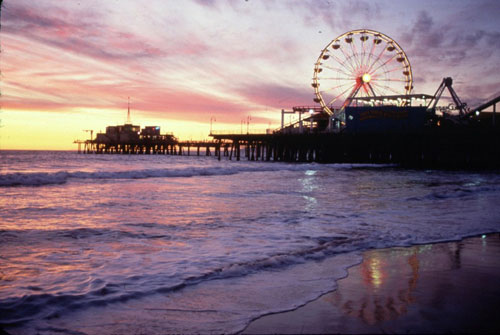