Designed at the turn of the 20th century as a monumental gateway for those arriving in Washington, D.C., by train, today Union Station is as much a public living room for the city as it is a transit hub that daily serves thousands of commuters and visitors. It is a place where city workers take their lunch breaks alongside members of Congress, and where restaurant patrons watch the "ballet" of crisscrossing travelers unfold in front of them, as an ever-changing community animates the space.

"We are a vibrant part of the city," says David Ball, president of the Union Station Redevelopment Corporation. "People want to be close to Union Station."

The American Planning Association (APA) has named Union Station as one of the 2008 Great Public Spaces in America for its vibrant social and welcoming atmosphere, its transportation options, its historic position in the L'Enfant Plan for Washington, and its sustained civic support and revitalization after periods of decline. 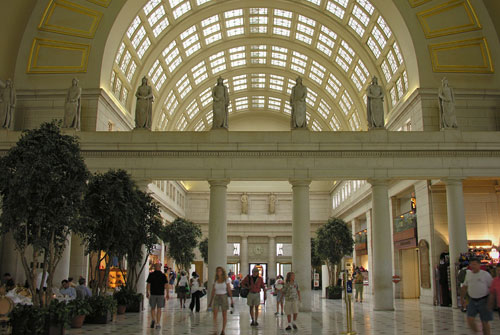 Opened on October 27, 1907 and completed in 1908, Union Station is considered to be one of the finest examples of the Beaux-Arts style of architecture. Photo courtesy Otavio Thompson.

Union Station sits as a visual and symbolic focal point at the confluence of the diagonally radiating streets of Massachusetts, Delaware, and Louisiana Avenues and First and E Streets NE. The significance of this location was no accident — it was carefully selected at the turn of the 20th century as "the grand gateway to the capital" through which everyone who comes or goes must pass.

"From all directions, Union Station is an impressive sight: approaching from the direction of the U.S. Capitol the central pavilion, based on the Arch of Constantine in Rome, frames the Columbus Fountain while residents arriving from the nearby Capitol Hill neighborhood walk through the loggia on their way to the subway," notes Richard Wolf, president of the Capitol Hill Restoration Society.

By the end of the 19th century, one of L'Enfant's grandest parks — the expansive National Mall — had become cluttered with overgrowth and disjointed with a rail station and train tracks that destroyed the broad public promenade. Union Station became an opportunity to beautify the troubled Mall through construction of a relocated rail terminal.

Burnham designed the station along classical lines, using elements of Greek and Roman prototypes within a stylized, ornamental Beaux-Arts aesthetic. He modeled Union Station's edifice after Rome's Arch of Constantine to reinforce the symbolism of the station as the triumphal gateway to the city. Burnham also included features such as rostral columns, flagpoles topped with eagles, and spaces inside and out for statuary by Augustus Saint-Gaudens. Massive in scale, the station covered more ground than any other building in the country at the time: 200 acres with 75 miles of railroad tracks. 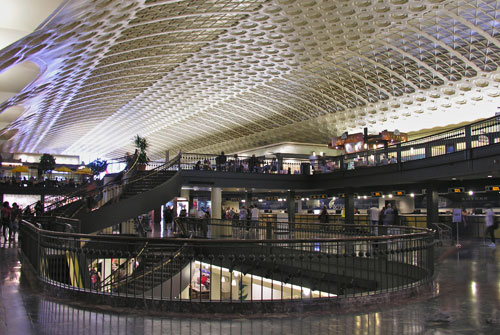 Architect Daniel Burnham designed the building to serve as a gateway for the capital city. Photo courtesy Otavio Thompson.

The station celebrates its its centennial in 2008, but less than 30 years ago it was shuttered with part of its roof caved in. Through the Union Station Redevelopment Act of 1981, Congress created what would be at the time the largest public-private venture in U.S. history, and with tremendous federal, city, and neighborhood support, the station was restored to its former glory. President of the Union Station Redevelopment Corporation David Ball, explains that "the concept of combining public transportation and retail was born" at this time, and the interior was updated to include shops and restaurants.

Visitors and residents alike congregate in the great Waiting Room, with its gilded barrel-vaulted ceiling towering 96 feet above the floor, its 626-foot-long loggia, and its row of vaulted bays punctuated by large pendant lights. Additionally, visitors can frequent the shops, dine at the restaurants, attend formal functions, or sit and watch passersby. Today Union Station is the most extensive multi-modal transportation center in D.C., providing service to tens of thousands of daily Amtrak, regional commuter rail riders, Metro passengers, and travelers moving by bus, car sharing vehicles, bicycle, and foot. A planned 1,700-square foot Bicycle Transit Center will provide bike parking, rentals, and repairs to enhance the viability of bicycling and connect cyclists with other sustainable forms of transportation.

Stimulating all five senses, Union Station is a favorite spot for people-watching, listening to live music, or pausing to take in the bustling sounds from arrival announcements, echoing conversations, and the tap of shoes on marble floors. Smelling of food, perfume, and flowers, it is a tactile place with merchandise and marble to touch, or to feel the vibration of trains emanating from below. It is a place to eat and drink, on the go or at your leisure. At Union Station there are always a million things going on with enough room for everyone, whether commuters, neighbors going out for dinner and a movie, local shoppers, or visitors from around the world. 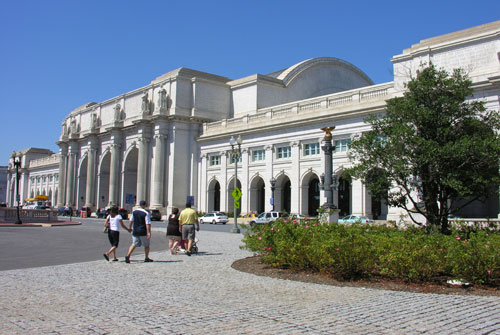 The white granite and classic lines of Union Station set the stage for the next 40 years of Washington's classic architecture - reflected in the construction of the Lincoln and Jefferson Memorials and the Supreme Court building. Photo courtesy Otavio Thompson.