Lending a multi-faceted, urban panorama and feel of Venice to Rhode Island's capital city is Waterplace Park and Riverwalk, a remarkable collection of cobblestone walkways, plazas, pedestrian bridges, gondolas and other features intertwined with the Moshassuck, Woonasquatucket, and Providence rivers. The park and riverwalk have been central to the revitalization of one of the largest and fastest growing cities in New England.

The park and riverwalk project is one of the 10 APA Great Public Spaces for 2008 because of the careful planning; unprecedented, strong collaboration; and unwavering commitment to transform the "world's largest bridge" into a network of attractive and inviting parks and walkways. The outcome has helped strengthen the vibrancy and excitement of Providence. 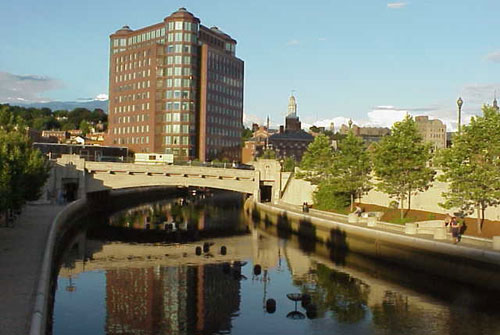 Waterplace Park is connected to 3/4 mile of cobblestone-paved pedestrian walkways along the waterfront known as Riverwalk. Photo courtesy the Rhode Island Planning Department.

"We have been called "The Mecca of Tourism and Arts" by The New York Times, and captured national awards and headlines for our thriving $112 million annual creative economy," said Mayor David N. Cicilline. "Waterplace Park plays an essential role in that effort, advancing the notion of Providence [as] The Creative Capital."

"Waterplace Park is the story of a very effective public-private partnership that seized opportunities that came along and made the most of them," Mayor Cicilline said. "It traces back to the Carter administration, which was planning a big investment to fix the railways of the Northeast Corridor," he continued. "A cross-section of business leaders and philanthropists — the Providence Foundation — saw in this the opportunity to achieve a longstanding goal for the city: to move the railroad tracks that divided the city. Joining with the Chamber of Commerce in commissioning a study, it proved to be cheaper to move the railroad than to repair the existing infrastructure."

"The Providence Foundation helped lead the planning effort, with city and state officials, and devised a plan that called for the moving of rivers and setting aside parcels for commercial development," he added. "State legislators passed a law to allow Providence to create a special district and set up a special governmental entity that became the Capital Center Commission."

Waterplace Park is a four-acre site in the heart of downtown, tucked beneath Rhode Island's State House, and designed to be used day and night. With a fountain and pavilion, winding pathways, smaller plazas with seating and crossover bridges, visitors and residents are attracted to the vistas and public programming offered.

The site includes and natural amphitheater, with a stage framing the city's changing skyline and river activity, including the world-famous Waterfire (with blazing cisterns in the evening, along the rivers.) And it is home to many live theater productions and festivals.

"By design, there is no point where you can see the whole installation at once, so you mingle with other citizens was you walk," said Waterfire sculptor Barnaby Evans. "It is designed so people can interact with each other, with the artwork and with the urban environment."

Walking away from that site, one follows the curve of a circular lagoon with a bend of the Woonasquatucket, reaching the neatly-landscaped grounds of the statehouse, Amtrak station and Fidelity, and a thriving downtown. 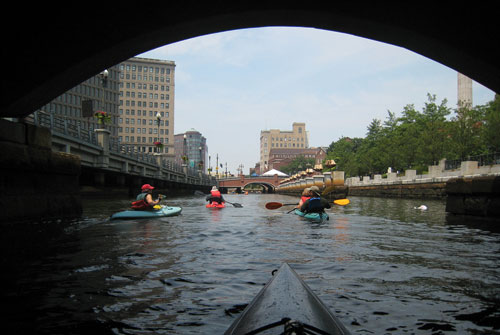 Visitors can enjoy the sights while traveling by gondola along the Providence River in Waterplace Park. Photo courtesy Andrew Bennett.

It was not always so inviting. Before its transformation, the area earned the title of "the world's largest bridge" because of its nearly contiguous mass of asphalt, rail track, freight yards, surface parking lots and roadways — including nine separate but interconnected bridges.

Creating a new vision for the area began in 1979, with development of the Capital Center Plan by consultants Skidmore, Owings & Merrill. The plan was the basis for a Capital Center Special Development District, made up of land owned by the city, state, Amtrak and P&W Railroad.

The planning effort was led by the Providence Foundation, in conjunction with city and state officials. The plan called for the moving of rivers and setting aside parcels for commercial development. Legislators passed a law that allowed the city to create a special district and set up a special governmental entity that became the Capital Center Commission. With entitlements from the Federal Railroad Administration and Federal Highway Administration, the joint commission was authorized to coordinate redevelopment of 15 parcels of land, move railroad tracks, and reconfigure roads.

A Waterfront Redevelopment Study for Providence was completed in 1983, followed by an Environmental Impact Statement that, in August 1984, found the most revolutionary of the design option would be the most successful. Three months later, the city, state, and Federal Highway Administration committed to funding the river relocation project. It took 10 years to implement the plan, which required rerouting the rivers, diverting the rail yards, and extending Memorial Boulevard.

Altogether, 11 acres of urban riverfront parks and 1.5 miles of riverwalks were created through the use of public-private partnerships and the dedication of a group of planners who sought to resurrect and engage the best features of downtown Providence and the people who use it. 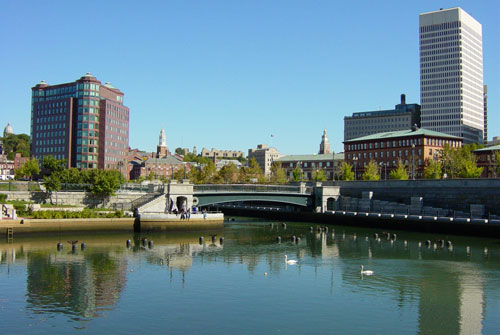 Walkers on the paths, bikers, joggers, artists sketching the city all can be seen here daily. Photo courtesy the Rhode Island Planning Department.