For Americans accustomed to doing their grocery shopping in indistinguishable supermarkets, the West Side Market offers shoppers an authentic and human experience. Cultures from around the world collide here as Chilean sea bass, homemade Lithuanian sausage, European cheeses, and freshly baked bread are all found beneath one roof. Vendors hail from Ireland, Germany, Slovenia, Italy, Greece, Poland, Russia, and the Middle East. Some have had family stalls at the market for generations.

After shopping for the best prices on lamb shanks, standing rib roasts, and cow tongue, many patrons head to the balcony that overlooks the entire market, or grab lunch next to the local businessmen and women who come to market for a quick bratwurst or falafel sandwich.

The American Planning Association (APA) has named West Side Market as one of the 2008 Great Public Spaces in America for its functionality as a neighborhood gathering place and fresh food market; its engaging atmosphere; and its role as an anchor in the community, stimulating nearby commercial and residential activity. 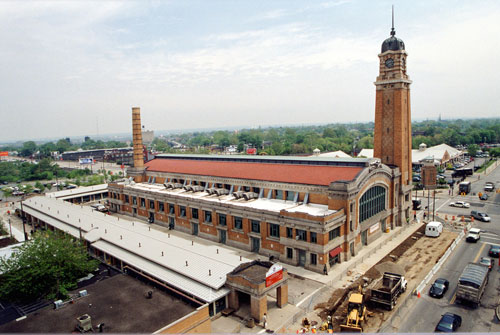 Due to recent exposure by channels such as the Food Network and the Travel Channel, the market has enjoyed unprecedented tourist numbers, and now offers guided tours for visitors. Photo courtesy Donn R. Nottage.

Built by the City of Cleveland from 1907 to 1912 under the administration of Mayor Tom L. Johnson — often considered Cleveland's greatest mayor — the market stands as a direct link between classical architecture and progressive politics in Cleveland. The West Side Market is reminiscent of a train station in scale and shape, although the details of the building tell the story of its purpose. Roughly 100 vendor stands are located under a 44-foot high vaulted brick herringbone bond ceiling. At the base of each arch leading to the main area are decorative terra cotta reliefs depicting produce and animals. Outside, an additional 82 vendors are located in the Produce Arcade, a subtle "L"-shaped structure that contrasts dramatically with the prominence of the main building.

"There's no other place like it; the smells are tantalizing, and the food is even better," says Sara Biegler from Cleveland. "The produce and fruit are amazing, and you only get the best quality, even in the dead of winter."

Covering 45,000 square feet, the market sits on the northeast corner of West 25th Street and Lorain Avenue. Built to the property line on its west and south sides, the design of the main building draws people to it. With its small setbacks and a distinctive copper-roofed clock tower reaching 137 feet in the air, it can be seen for blocks in any direction. It acts as a visual landmark and a beacon drawing people not only to the market, but to the commercial district surrounding it.

The West Side Market has acted as an anchor for the West 25th Street commercial corridor and the neighborhood for many years. Nearby ethnic restaurants and local retail shops rely on the steady flow of traffic from the market. Activity at the market also has spurred community events, like an outdoor arts, antiques, and collectibles market during the summer months. In addition, along West 25th Street near the market, several large, former commercial buildings have been adaptively reused as apartments and condominiums, and commercial storefronts have been renovated. 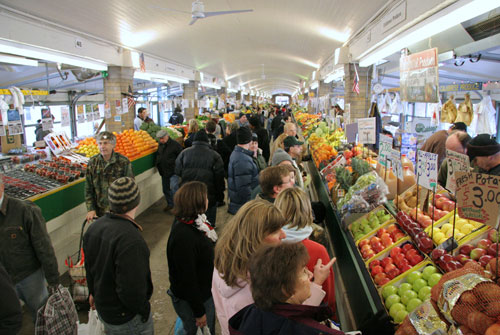 Many stalls at the market have remained under individual family control for much of the life of the market, in a few cases dating back to the original opening in 1912. Photo courtesy Donn R. Nottage.

A great deal of work by resident groups, city officials, and planners during the past century has helped ensure that the market has remained a vital center for the community. To keep the market in tip-top shape, on-site city employees perform routine maintenance, and periodic masonry and window restoration projects have helped keep the market looking almost exactly as it did when it was dedicated in 1912.

"Among my earliest memories as a child, I remember walking with my father from our home on West 30th Street to the West Side Market," recalls Congresswoman Mary Rose Oakar in her prologue to To Market to Market — An Old-Fashioned Family Story: The West Side Market by Joanne M. Lewis.

"My father knew everyone, and the marketeers called him 'Joe,'" Oakar said. "I have always known the generations of people who run the stands — the Tricskos, the Ehrnfelts, the Webers, the Simmelinks, the Ralofskys, the Peters, the Leus, the Coynes, the Rinis. Today our market is more vital than ever." 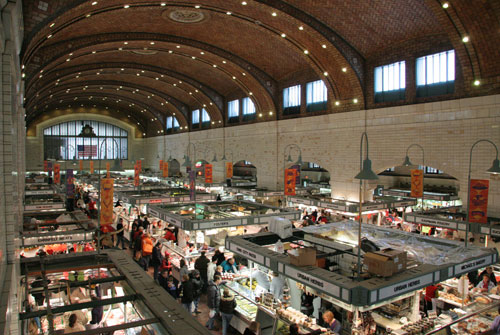