Known as the "jewel" of downtown Prescott, Arizona, the Yavapai County Courthouse Plaza is a majestic, man-made urban forest in the heart of a historic commercial district. For more than 140 years it has served as a gathering place for celebrations, commemorations, campaign kick-offs, concerts, movies, and festivals.

One of the American Planning Association's (APA) 2008 Great Public Spaces in America, the Yavapai County Courthouse Plaza exemplifies how citizen support, planning and design, and grounds management and maintenance can create a treasured urban space that is the center — both geographically and spiritually — of the community. 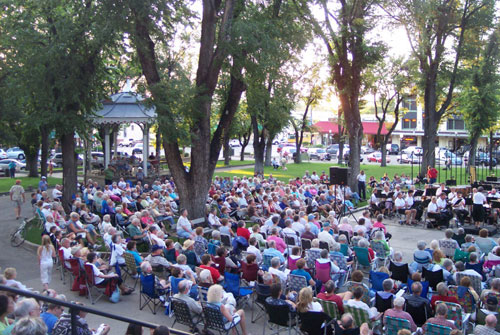 A free summer concert at 7 p.m. brings out a good-sized crowd with the downtown historic buildings providing the backdrop. Photo courtesy Mike Bacon.

The plaza's success is rooted in Prescott's original town site plat, which was recorded in 1864. The traditional grid pattern had as its centerpiece the 4.1-acre courthouse plaza. Adjoining the courthouse is the city's commercial district and businesses — many of which are located along Montezuma Street's historic Whiskey Row — that keep the area alive after 5 p.m.

That this historic district exists today is a testament to the community's determination. A fire in 1900 destroyed eight blocks, including Whiskey Row, and resulted in $1.5 million in losses. Despite the fact that many merchants were uninsured, most rebuilt.

Today, these human-scale brick and masonry buildings provide the historic ambiance and context for the plaza. Eleven are listed in the National Register of Historic Places along with the granite, Neo-Classic Revival-style courthouse itself. In 2000, a historic preservation overlay district was enacted to preserve the downtown's architectural heritage. Any building modification, signage, or new construction requiring a building permit must be approved by the Prescott Preservation Commission.

The commission recently gave its approval to two new, historically compatible structures across from the plaza's south side. These three- and four-story mixed-use buildings will feature ground-floor retail with condos above. Residential uses, which contribute to the liveliness around the plaza, are permitted in the downtown business district under the city's zoning code.

Citizens are protective of the plaza and its four-story courthouse. In 2004, residents sued to block construction of an 80-foot-high contemporary office building just two blocks from the plaza. Although allowed by city code, residents protested the intrusion of a building so out-of-scale with the rest of the neighborhood. Three years later, the community rallied on the courthouse steps to dissuade the county from moving the courtrooms elsewhere. 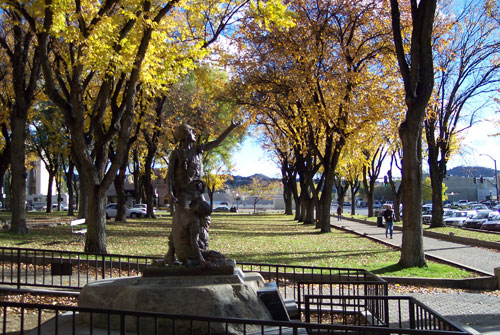 Veterans of All Wars Memorial Statue looks across the west entrance to the plaza. Photo courtesy Mike Bacon.

While the courthouse itself has been built, relocated and rebuilt, and built again — most recently in 1916 — the plaza has evolved organically. Beginning in 1879, gravel walks were installed and trees were planted. In 1902, a fountain was added and, five years later, a bronze memorial statue was placed on the plaza. Considered one of the finest equestrian sculptures in the U.S., the statue honors members of the First U.S. Volunteer Cavalry of Teddy Roosevelt's Rough Riders who gathered at the plaza on May 4, 1898, before heading to San Antonio at the onset of the Spanish-American War. Several other statues have since been added.

More than 170 trees, including 127 American elms, grace the plaza. In addition to the extensive tree canopy, the plaza features large expanses of curbed grass lawn, interlocking pavers, a painted historic timeline, and a historic well and bandstand. Public restrooms were installed under the western steps. The north courthouse steps provide natural seating for performances. And it was from those steps that Barry Goldwater announced his candidacy for president in 1964.

The plaza hosts more than 130 activities annually. Dancing, outdoor movies, concerts, or poetry readings are attended by as few as 50 or as many as 600 people each weekday evening during the summer. The plaza is regularly home to joggers, workers on lunch break, dog walkers, tourists, Frisbee players, and parents pushing strollers.

"Other communities may have courthouses of greater architectural significance and grander displays of colorful plant beds," says Mike Bacon, a community planner with the City of Prescott, "but not all such plazas are so appreciated by its residents, carefully maintained, or so heavily used." 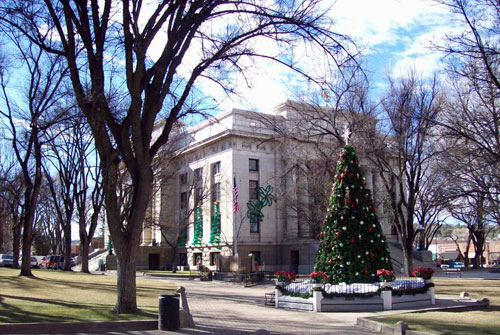 Constructed with the popular Neo-classical Revival style, the two-story courthouse is symmetrical and faced with locally quarried granite over a structure of reinforced concrete. Photo courtesy Mike Bacon.