With a postcard-perfect view from Main Street, Central Square is the iconic and geographic heart of downtown Keene. As the city's soapbox and cultural hub, Central Square has been part of the fabric of life here for more than two centuries. The site comprising the square has served as a common since the city's third meetinghouse opened in 1760. To ensure the square's continued vitality, the city encourages a mix of uses in the area and has regulations to protect the architecture of buildings across from the park and allow new structures consistent with the existing design.

Central Square is located in the heart of downtown Keene where the confluence of three streets — Main, Court and Washington — form the shape of a "Y." 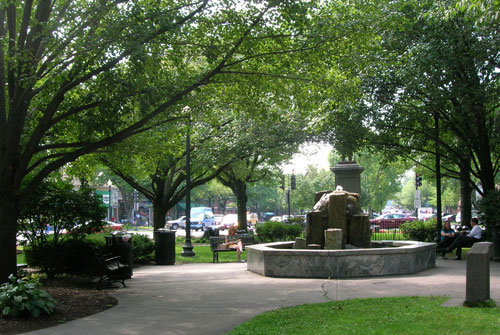 Central Square evolved organically. It wasn't until 1828, when the meetinghouse was removed from the common, that the idea of a square took root.

Beautification efforts, begun in 1844 by the Forest Tree Society, met with resistance from merchants accustomed to unobstructed views of their signs from surrounding roads. The plantings, however, proved popular and by 1855 amenities, such as a bandstand and the present stone-post and iron-rail fence, were being added. Central Square is part of a local historic district and several surrounding buildings — including the much photographed United Church of Christ — are listed on the National Register of Historic Places. 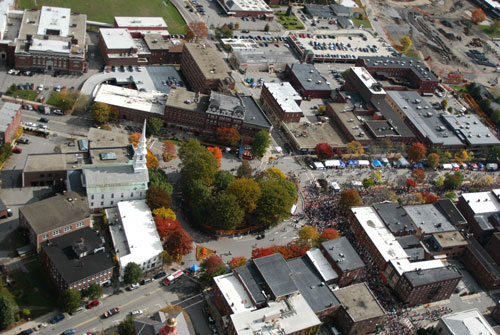 Commitment to Planning and Preservation 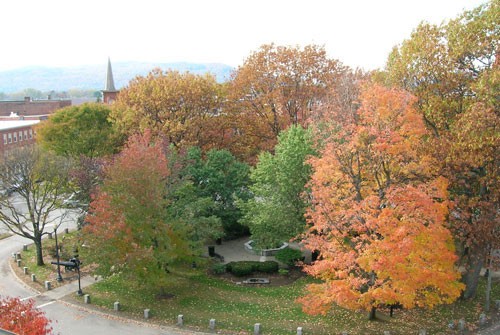 Three pathways traverse the park, providing pedestrian access from all sides of the circular-shaped square. Photo courtesy of City of Keene.