The Squares of Savannah: Savannah, Georgia

The original four squares of Savannah date to 1733 and were a distinctive part of James Oglethorpe's plan for the city. Eventually squares were located in the center of each of the city's 24 neighborhoods or "wards." The foresight of Oglethorpe's design continues to provide an extraordinary example of how public space provides a timeless and lasting amenity to a community. Very much used and beloved, the squares are essentially public "living rooms" where residents and visitors alike go for morning and evening strolls, afternoon games and activities, and special events and celebrations.

Savannah's 22 squares are located across a one-square-mile area of downtown. Each square is typically 200 feet north to south and 100 to 300 feet east to west.

The squares are used for public and private events year-round, including the St. Patrick's Day Parade in Oglethorpe Square. Photo courtesy of Charlotte Moore.

Twenty-one of the 24 original squares, all located within the boundaries of the city's National Landmark Historic District, exist largely the way they did when originally built during the 18th and 19th centuries. Each square has its own identity, reflecting a sense of place that mirrors the character of its neighborhood and surroundings. The 22nd square, Ellis, is being rebuilt after having been used for the site of a parking garage. 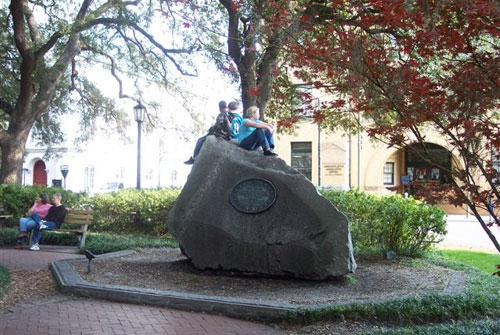 Most of the squares feature a monument, statue, fountain, obelisk, or public art piece, which makes the squares interesting and engaging places to walk and experience. Photo courtesy of Charlotte Moore. 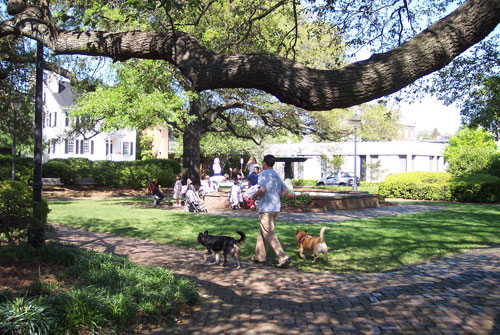 Visited by 15,000 people each day, the Squares of Savannah are essentially public 'living rooms' where residents and visitors alike go for morning and evening strolls, afternoon games and activities, and special events and celebrations. Photo courtesy of Charlotte Moore.