The 1.9-mile walk around Gray's Lake is known as "doing the loop," and for some residents it's a daily ritual that even prairie grass burns, trail repairs, and flooding won't stop. Such dedicated use of the park is just one example of how important Gray's Lake Park is to everyday life in Des Moines. The city's best-known and most-visited recreation area, the park has qualities and features that attract visitors regardless of the time of day or season of the year. The iconic, 1,400-foot-long Kruidenier Trail pedestrian bridge over the lake is the park's most distinguishing feature.

The park is located at Fleur Drive and George Flagg Parkway. 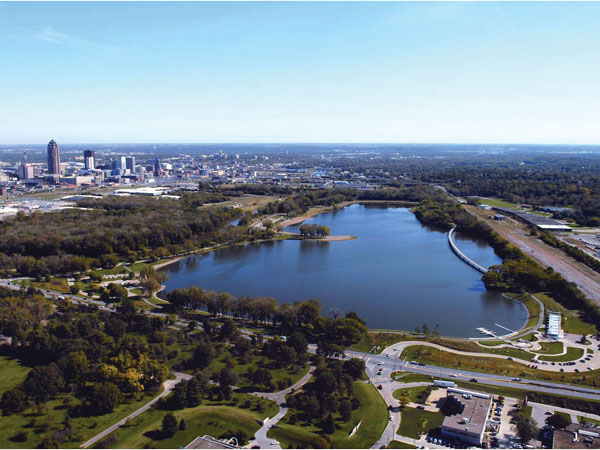 Gray's Lake is located within the city boundaries of Des Moines. The trail connects with a six-mile network of downtown Des Moines trails and offers expansive views of the city's skyline. Photo courtesy of the Downtown Community Alliance.

Built in 2000 when an owner wouldn't sell land south of the lake, the bridge completes the lake's circumferential trail and provides the park's best views of the downtown skyline. It's even more dramatic at night when a rainbow of colors lights up the 16-foot-wide pathway and reflects off the dichroic glass panel railings.

Begun as a small oxbow lake on the Raccoon River, Gray's Lake expanded to 100 acres by the 1950s, the result of four decades of sand and gravel quarrying. Those who preferred the area to be used as a recreational park were dismayed by construction of a hotel by the lake in 1959.

Residents continued to call for a park and a city plan recommended that Gray's Lake be set aside for recreation. The plan, together with funding to purchase a portion of the land around the lake, led to the park's creation in 1970. A devastating 1993 flood, which destroyed the hotel on the lake, provided an opportunity to redevelop the area into a more extensive park. Public and private contributions, led by local philanthropists David and Elizabeth Kruidenier, inspired both renovation of the park and hundreds of millions of dollars of development in downtown Des Moines.

Today, trail counts project that more than one million people use Gray's Lake Park each year, whether to eat lunch during the weekday, walk dogs, connect to local and regional trails, attend outdoor yoga classes, or boat and fish. A place for all seasons, Gray's Lake is the crown jewel of Des Moines's park system — the epitome of an ideal public space. 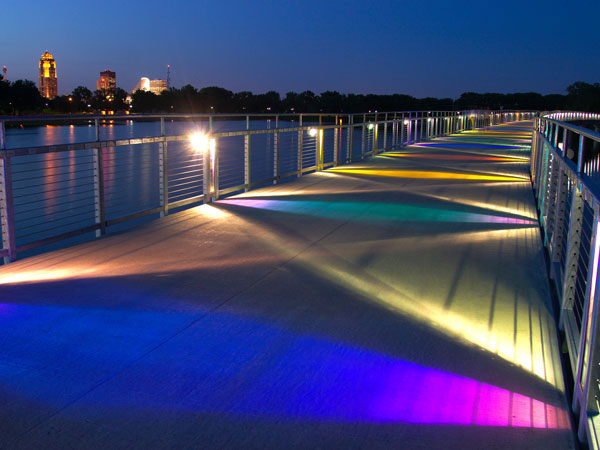 The Kruidenier Trail Pedestrian Bridge featured at night and lit up in an array of bright colors. Photo courtesy of Tim Bloomquist.

Serves as catalyst for redevelopment 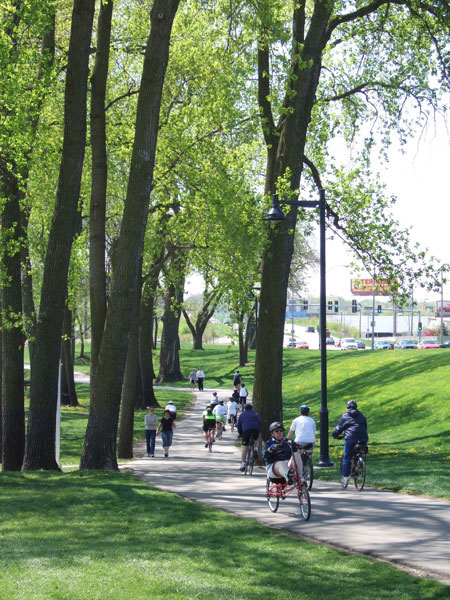 The Kruidenier Trail Bridge completes the Gray's Lake circumference trail and is popular by day and night. Photo courtesy of Bob Modersohn.