Catalyzing the revival of the Portland, Oregon, riverfront, Governor Tom McCall Waterfront Park is a hallmark of the city's storied planning tradition. The park was born out of Gov. Tom McCall's 1968 Harbor Drive Task Force, which called for the closure of Harbor Drive Freeway and a return to the pedestrian-oriented principles laid out in 1903 by the Olmsted Brothers in their park plan. Since 1978, the 30-acre park has served as a green urban greeting to residents and visitors alike. The park was developed in five phases, ending in 1989. 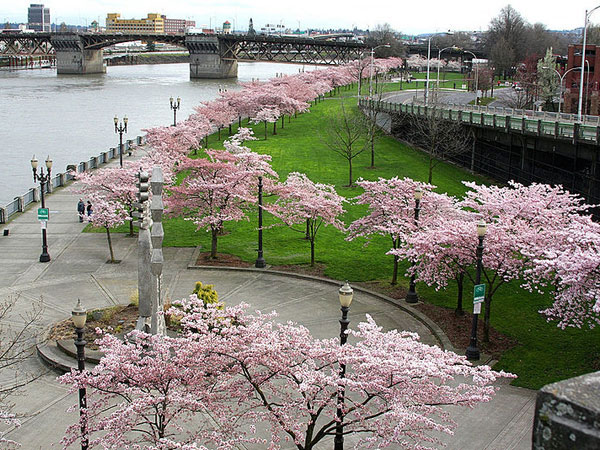 More than just a green corridor through the city, the park's design includes a diverse range of features, from the Battleship Oregon memorial to 100 cherry blossom trees surrounding the Japanese–American Historical Plaza. In addition to attracting hundreds of daily users for recreation and relaxation, events like the quirky Saturday Market and June Rose Festival bring nearly one million people to the park each year.

Recommendations for the future of the park were developed during a master plan update completed in 2003. The 30-month process generated a 20-year strategic plan that focuses on accommodating increased recreational activity along the riverfront. Several features of the master plan, including an interactive water play area that became a reality in the Bill Naito Legacy Fountain, have been implemented.

New development inspired by and located next to the park includes RiverPlace. The first phase, finished in 1985, included a marina, condominiums, a hotel, restaurants, and an office building. Later phases followed, adding townhouse units, an athletic club, and retail and restaurant space. 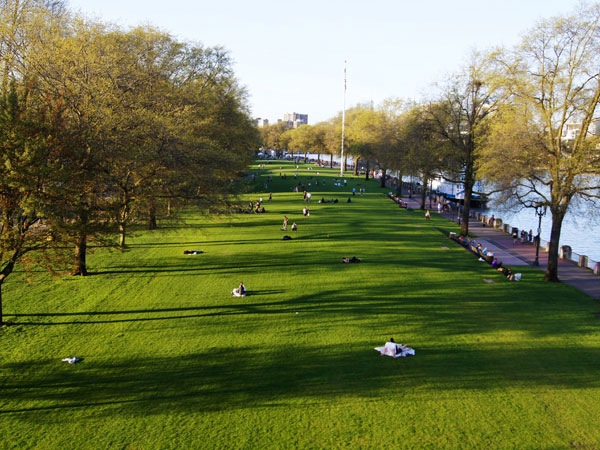 The park's central lawn area. Other features of this 30-acre park include fountains, sculptures, and connecting paths and walkways. Courtesy Portland Parks and Recreation. 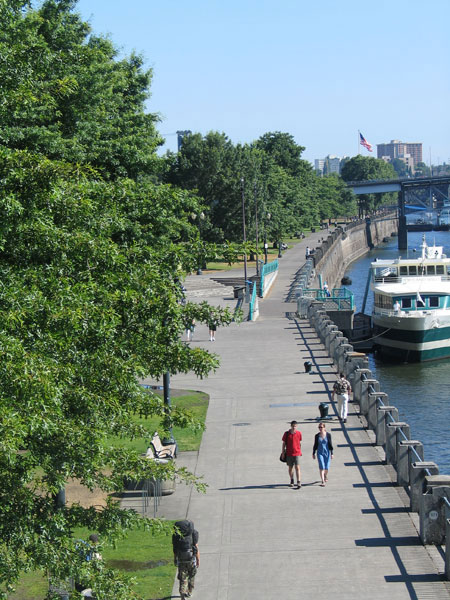 Development of the park entailed closing Harbor Drive and replacing it with a promenade along the Willamette River. Courtesy Portland Parks and Recreation.