The nationally historic, beautifully landscaped, and highly popular Essex County Branch Brook Park is the crown jewel of the Essex County, New Jersey, Park System. As such, it plays many roles: as a public backyard for the residents of Essex County, as the playing fields for the city's 40,000 students, and as the destination for 100,000 visitors each spring who come to see the nation's largest collection of blossoming cherry trees.

Park is generally bounded by Interstate Highway 280 on the south, the Newark City Light Rail line on the west, and Belleville Park with an extension between Mill Street and the Second River on the north. The eastern boundary moves along many streets, principally Clifton Avenue, Lake Street, and a line extending from Branch Brook Place. 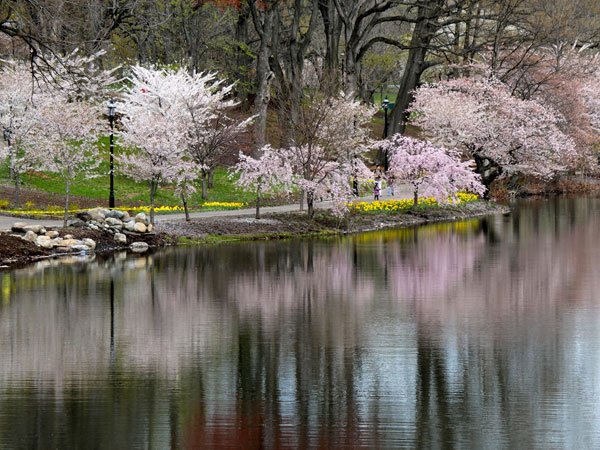 At 360 acres, Branch Brook is the largest park in the Essex County Parks System. The park, whose borders move in and out forming an L shape, is approximately a quarter-mile wide and four miles long. There are two major circulating drives that connect the park's four divisions and 12 miles of walking paths.

Despite its beloved status in the community and philanthropic support, Branch Brook Park fell victim to benign neglect and delayed maintenance. To direct public attention to the park, several local citizen groups, including Friends of Branch Brook Park, Concerned Citizens of Forest Hill, and members of the New Jersey Performing Arts Center's Women's Board, joined together. Among their initial steps was getting the park added to both the state and national registers of historic places in 1980 and 1981, respectively. This was not enough to prevent the space from being "loved into decrepitude," which is how the park was described in the five-volume "Cultural Landscape Report, Treatment, and Management Plan" published in 2002.

Today the park is in the final phase of implementing its restoration plan, including long-deferred capital improvements, and addressing recommendations in the Cultural Landscape Report that aim to restore the park's original artistic legacy created by the genius and vision of Olmsted and Vaux more than 150 years ago. 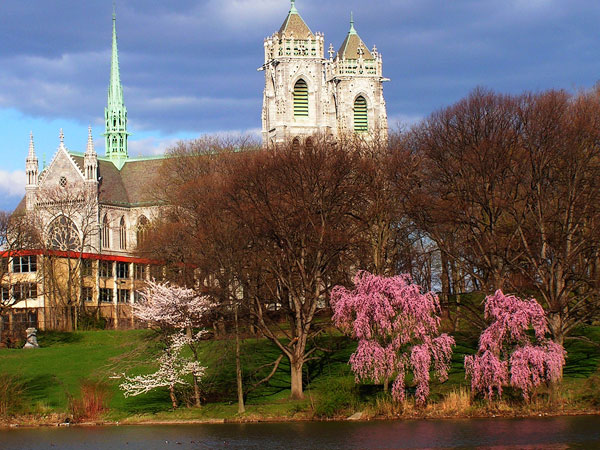 The Cathedral Basilica of the Sacred Heart, one of the largest cathedrals in the U.S., is on the east side of the park. Photo by Flickr user Hope Adams (Hopefoote, Ambassador of the Wow) (CC BY-NC-ND 2.0). 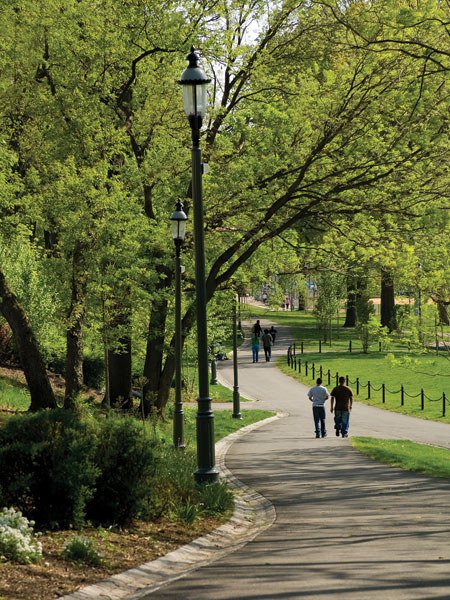 People enjoy a beautiful day along one of Branch Book Park's many paths; ornamental lighting poles with buried wires illuminate the main paths throughout the park. Photo courtesy O'Brien Photography.