From stunning views of Anchorage's skyline to the breathtaking expanse of Cook Inlet, with occasional glimpses of Beluga whales, bald eagles, moose, snowcapped Denali, and some of the world's largest tides, there's always something to see and experience along the Tony Knowles Coastal Trail.

The trail begins at the Alaska Railroad Station on 2nd Avenue and continues along Knik and Turnagain Arms of Cook Inlet to Kincaid Park. 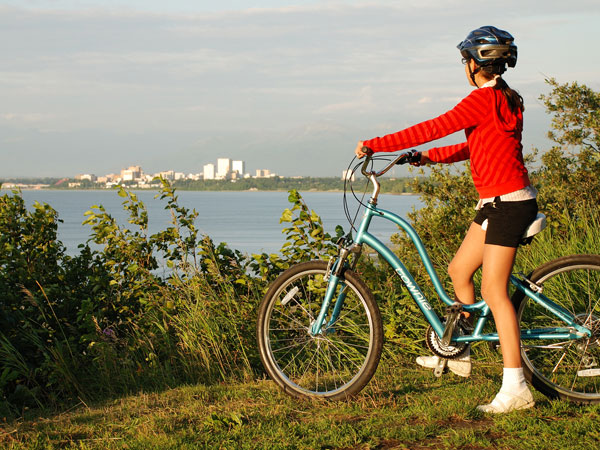 Connecting more than 40 miles of trails and seven city parks, the trail brings year-around recreation to the doorstep of thousands of cyclists, runners, wheelchair users, skaters, and skiers. The trail, named after former Anchorage Mayor and Alaska Gov. Tony Knowles, also hosts the country's second-largest cross-country ski race — the Tour of Anchorage — as well as a range of other events throughout the year.

The genesis for the Tony Knowles Coastal Trail, as well as coastal recreational access across the country, was the 1972 Federal Coastal Zone Management Act. Alaska legislators approved a statewide coastal zone management act in 1977, and a year later Anchorage approved an area-wide trails plan. By 1981, city voters overwhelmingly approved Proposition 5 that included $6 million for the coastal trail's preliminary design and land acquisition.

Constructed in four phases between 1986 and 1988, the two-lane, 11-mile-long trail provides non-motorized access to all users. It was designated a National Recreation Trail in 1996. In 1999 the trail was awarded a Medallion Award from the American Society of Landscape Architects as part of its Centennial Celebration to recognize significant designs by landscape architects.

A feasibility study and preliminary plans were developed to extend the trail 13 to 16 miles south to Potter Marsh using mostly federal funds. Anchorage residents, however, were divided about the extension and in November 2005 the Anchorage Assembly directed staff to stop work on further studies and plans for the extension.

Because it is the city's most popular and heavily used trail, a watch program for the pathway was launched in 2003 and is staffed by citizen volunteers who patrol the route to ensure public safety. Funding for trail signs, lighting, maps, and maintenance is provided through local businesses and community partnerships. During 2011 and again this past summer, the trail underwent several miles of resurfacing and bridge repairs that will ensure decades more use and enjoyment. 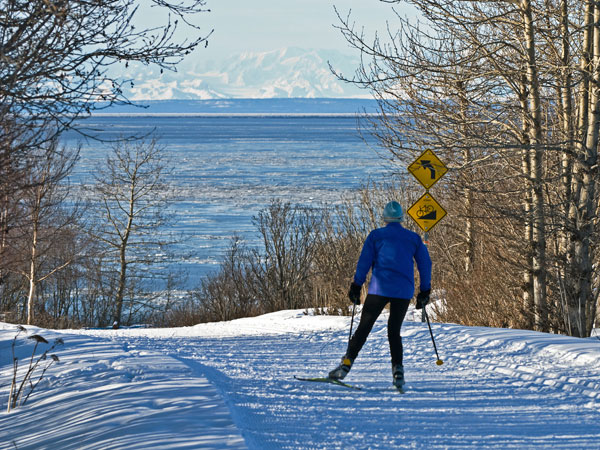 The Coastal Trail is used year-round and is popular with cross-country skiers. Photo courtesy Jody Overstreet. 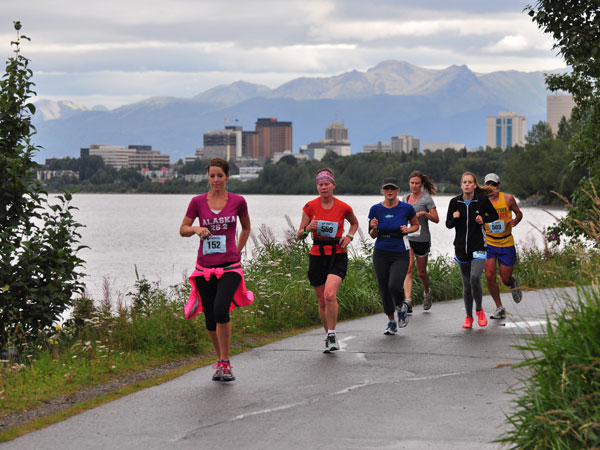 Competitors in the Big Wild Life Runs, an event held on the Tony Knowles Coastal Trail, with the Anchorage skyline behind them. Photo courtesy Jody Overstreet.