Hermann Park is a great public space in the City of Houston that claims a special place in the hearts of residents and visitors here. The current site is the product of more than 70 land transactions and now encompasses 445 acres.

Between the city's Medical Center and the Museum District across from Rice University, bounded more or less by Hermann Drive, Alameda, Holcombe, Cambridge and Main Street. 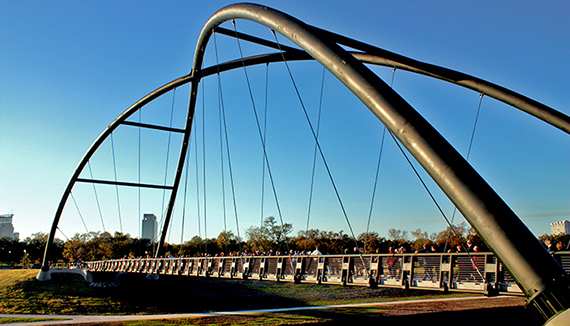 Hermann Park is a 400-acre space with many different points of interest, and the park is well-connected for all users. The Bill Coats Bridge is an important connector between two sides of the park. Photo courtesy Houston Parks and Recreation Department.

Hermann Park is a place where nearly six million annual visitors get to explore and enjoy a great number of unique settings. It is home to venues such as the Houston Zoo, Houston Museum of Natural Science, McGovern Centennial Gardens, the Japanese Garden, Miller Outdoor Theatre, and Hermann Park Golf Course. Its features include McGovern Lake, Jones Reflection Pool, Buddy Curruth Playground for All Children, and many miles of pedestrian and bike trails. Visitors may also enjoy rides on the miniature train, pedal boats, and bicycle rentals at B-Cycle locations.

The Brays Bayou area is part of the city's Bayou Greenways Initiative being planned by the City of Houston and Houston Parks Board to connect all of the major bayou parks, manage flood waters, and improve the health of both ecosystems and residents in Houston. Project Brays, recently completed by Harris County Flood Control District, transformed an unsightly channel into one of the park's most scenic areas. It is home to the Bill Coats Bridge, named for a Conservancy founder. The 290-foot suspension bridge, built by TxDOT (Texas Department of Transportation) in partnership with the Houston Parks and Recreation Department and Hermann Park Conservancy, connects the banks of Brays Bayou in the Bayou Parkland area, linking pedestrians and cyclists in the surrounding neighborhoods to trails and public spaces found in Hermann Park. 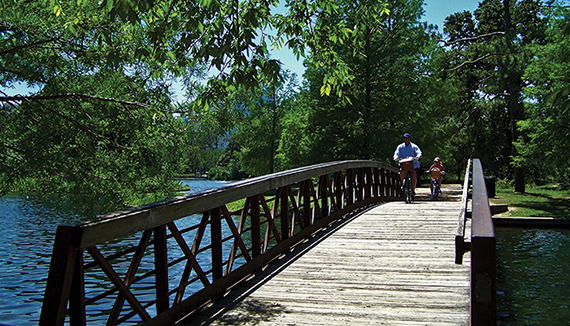 The lush greenery benefits from Hermann Park's proximity to Brays Bayou, an important waterway. Houston planners are working to use Hermann Park as an important piece of the Bayou Greenways Initiative to help mitigate the impact of flooding in the region. Photo courtesy Houston Parks and Recreation Department.

Hermann Park is the work of some of the great park planners and landscape architects of the past century working with highly motivated, civic-minded citizens.