Starting in the 1880s, the Atchison, Topeka and Santa Fe Railroad system opened up Santa Fe, then a small town, to greater trade opportunities, rail freight, and tourism. The Santa Fe Railyard served as an active hub for locals for 100 years. But by the 1980s, the decline in rail activity left the railyard almost abandoned while the surrounding city began to see a surge of significant of growth in its population. A general plan, Business Capital District Plan, and several others were drawn up to manage the growth and development of the city and its cherished spaces.

The North Railyard, a 37-acre district, is bordered by the Guadalupe Street business district and the Ferrocarril neighborhood. It is linked to the 13-acre Baca Street Railyard property by a hike-and-bike trail. 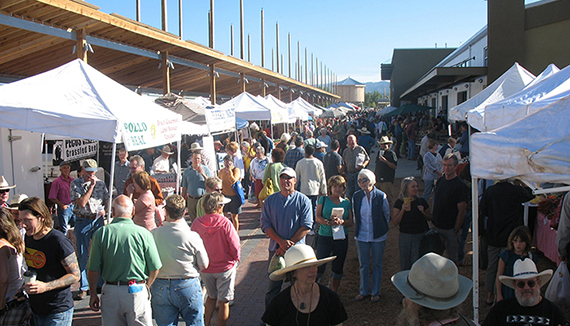 The farmers' market in the Railyard is one of many events that brings people into this public space. People may also be found at the galleries and open spaces or riding on the bike trail that connects the North Railyard to the Baca Railyard. Photo Santa Fe Railyard Community Corporation.

In 1985, the mayor of Santa Fe announced a plan to develop and repurpose the railyard. Many ideas were proposed, yet none were chosen. In 1992, the Catellus Plan, submitted by the owners of the property, called for demolition of the tracks and the industrial buildings and proposed a shopping mall with luxury hotels and parking structures. This aroused significant public opposition and was rejected. It became clear to community activists and newly elected mayor Debbie Jaramillo that the city should buy the railroad property to prevent inappropriate development and to create the opportunity for a new public place for all Santa Feans. This bold purchase, facilitated by the Trust for Public Land, was accomplished in 1995 and included the requirement for a minimum 10-acre park.

In the following year, the city planning department and the nonprofit Santa Fe Land Use Resource Center led a 16-month community-based planning process involving over 6,000 residents to craft the Community Plan. This conceptual plan approved by the city envisioned a new public place for all Santa Feans, built on the good industrial bones, retaining the train tracks, anchored by local businesses, nonprofits, and cultural institutions woven together by a network of public open spaces. This new community asset would have nonprofit governance and would provide substantial long term financial return to the city.

In 2002, the refined Railyard Master Plan, designed by the local firm Design Workshop and led by Faith Okuma with additional citizen participation and using the Community Plan as its framework, was approved by the city. This master plan encouraged the adaptive reuse of 140,000 square feet of existing structures and allowed an additional 360,000 square feet of new development on small parcels, subject to industrial and contemporary design guidelines. It was pedestrian dominated, with a diversity of public gathering places, dispersed parking areas, multimodal transportation, and rigorous environmental sustainability standards. At the same time, the city signed a long-term agreement with the Santa Fe Railyard Community Corporation to provide nonprofit management of the private development within the Railyard and to administer the great variety of public events programs.

The Trust for Public Land organized an international design competition for the new park, plaza, and alameda and raised the money for its construction. The award-winning design by Ken Smith, Frederick Schwartz, and Mary Miss was responsive to participation of the residents and features xeriscape landscaping, shaded ramadas, community gardens, a restored acequia, playground, and performance lawn.

In 2008, the Santa Fe Railyard reopened to a crowd of 20,000 people and is a public space now enjoyed by residents and visitors. The North Railyard, as it is known by locals, is the area where the town comes in for the nationally renowned farmers market, crafts fairs, the Indigenous Fine Arts Market, live concerts, school reunions, and pop-up movies. It is populated with art galleries, restaurants, brew pubs, the innovative Violet Crown Cinema, and city offices.

The Baca Street district, bustling with arts and antiques venues, is a vibrant place for creative minds to come together and share their work with the public. Bike lanes cross through the different areas and encourage people to leave their cars at home. The new Rail Runner commuter train, initiated by Gov. Bill Richardson, has regular service between Albuquerque and the historic depot at the center of the revitalized Santa Fe Railyard. 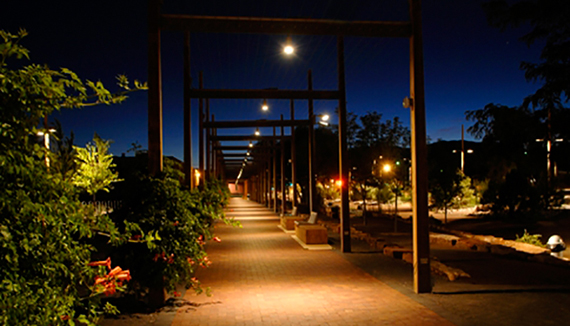 The Santa Fe Railyard has been recognized for its design and aesthetics. The meticulous landscaping is complemented by sustainable features such as the comprehensive graywater system. Photo Santa Fe Railyard Community Corporation.

The Santa Fe Railyard exemplifies what great places can be built through successful public-private partnerships. These investments to date of $140 million have created a new public realm in the city. 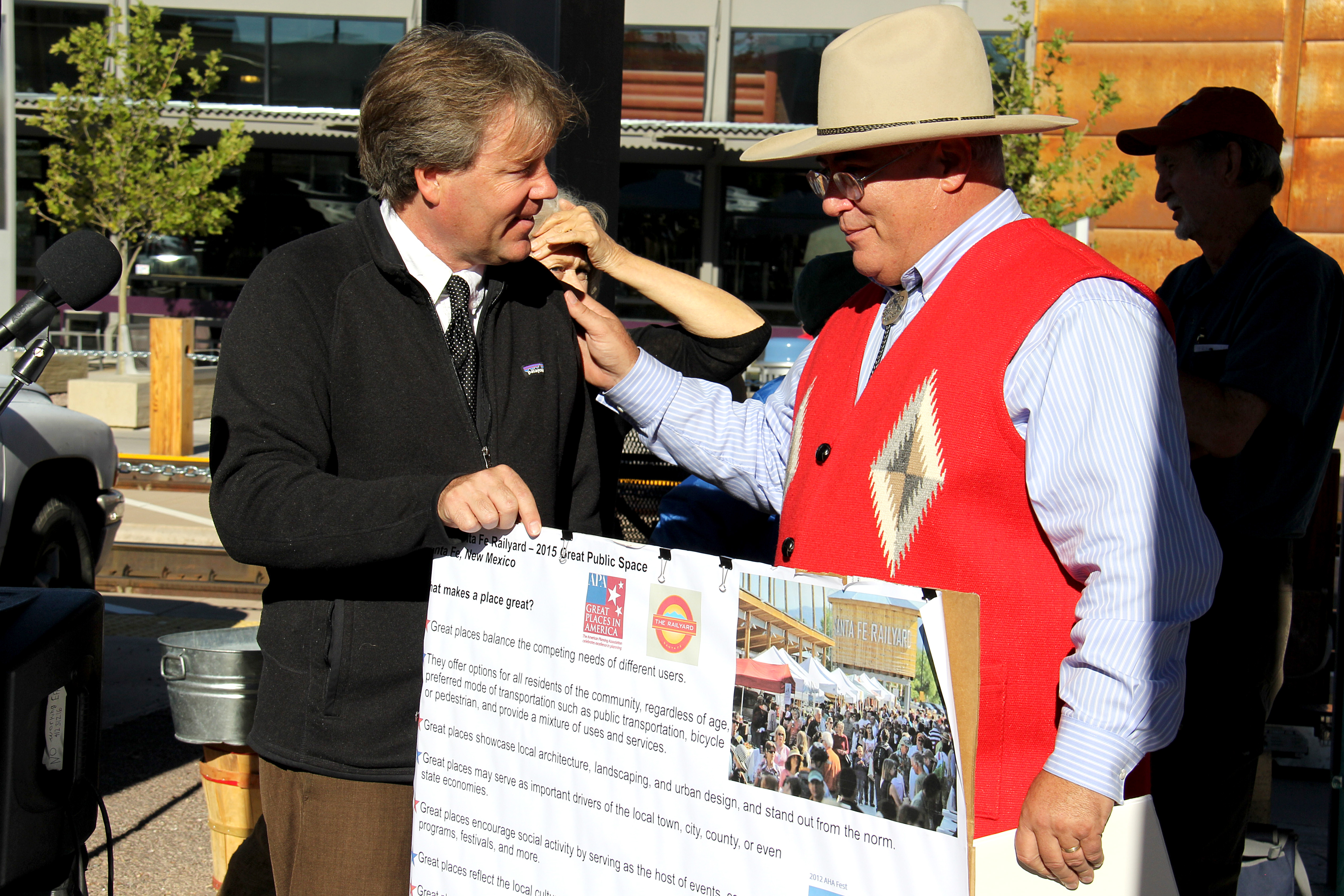 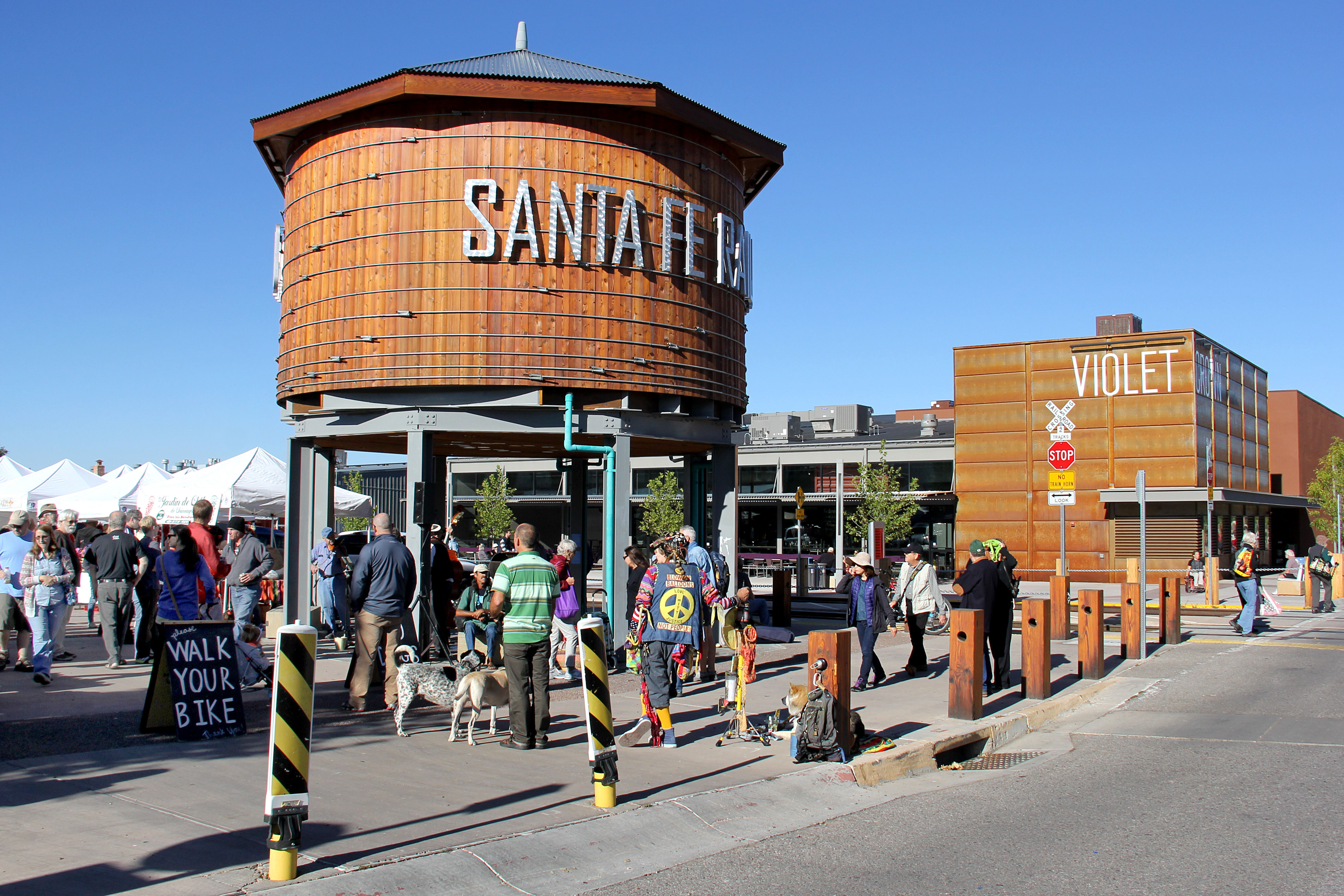 The Santa Fe Railyard Balloon Man (with peace symbol on his vest) and his famous Chow. Photo by Melissa Fricek.