Cars, pedestrians, bikes, skateboards, carriages, and trolleys amicably share space along the 10-block stretch of Bull Street that begins at City Hall and ends at Forsyth Park. But walk those blocks and the feeling is that of a more relaxed era. As Savannah prepares to celebrate the 275th anniversary of the plan that gave birth to this mixed-use corridor, the heart of the city's downtown bustles with history and activity. It has stood the test of time.

The American Planning Association (APA) has selected Bull Street as one of 10 Great Streets in America for its success in balancing competing needs — driving, transit, walking, cycling, servicing, parking — and adapting to contemporary uses, all while maintaining a place of longstanding quality and value. 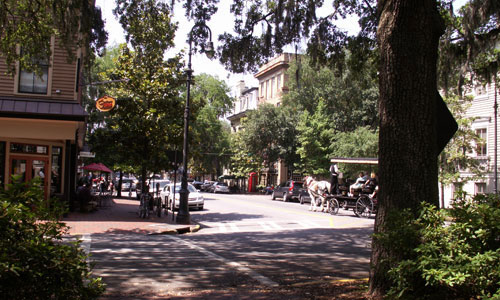 Bull Street is in the center of a National Historic Landmark District, and one of the largest in the U.S. Complete with over 24 public squares today, four of which were included by General James Edward Oglethorpe in his 1733 plan for Savannah. In his unusual orthogonal plan, streets and building lots are arranged around a central open space. The repetitive street grid connects one neighborhood to another and one public square to the next. Between the Revolutionary and Civil Wars, Savannah and Bull Street continued to develop according to Oglethorpe's plan.

While no longer used for military purposes, many of the squares are adorned with statues commemorating the city's history. Bull Street's Chippewa Square, for instance, was laid out in 1815 and named for a battle in the War of 1812. The square, featured in the movie Forrest Gump, hosts a bronze and marble monument to Oglethorpe.

Chippewa Square, like the rest of Bull Street, features a range of architectural styles, from the classical First Baptist Church to the Moses Eastman house designed by Charles Cluskey. Situated along the Bull Street corridor are outstanding examples of Greek Revival, Italianate, Second Empire, and Postmodern architecture, giving the feeling that the street has evolved over time.

Bull Street is a unique and historically rich area. Granite curbs, brick sidewalks, and mature trees enhance the streetscape. The street, zoned for mixed use, is home to churches, government buildings, homes, shops, and restaurants. There are no vacant properties along Bull Street. 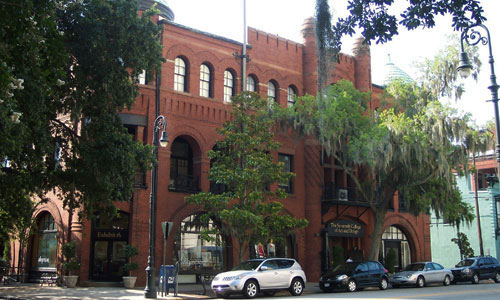 To encourage walking, the city has opened a parking lot four blocks from Bull Street. City workers are encouraged to park here and take a free shuttle to get to the core; however, many choose to walk. Bull Street is a tourist draw as well, but not like other parts of Savannah. The architecture, tree canopies, coffee shops, and public squares make it one of the best walking streets in town.

As Savannah looks to its future, the city has put in place height and design standards to help ensure that new infill development along Bull Street is compatible with existing buildings. Underground parking is encouraged as are environmentally sound practices, such as green roofs.

Having sustained economic, physical, political, and societal pressures for nearly three centuries, Bull Street continues to adapt to contemporary uses, the result of an innovative plan that still serves as a model for new urban developments. 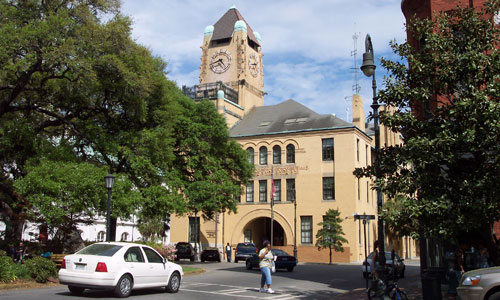