The story of Chicago's North Michigan Avenue could be aptly subtitled "selected works in the history of the skyscraper." But that would ignore the rich milieu of planning, commercial, community, and design activity that have combined to make "The Magnificent Mile" into the ultra-dense, ultra-varied urban wonderland that it is.

The American Planning Association has selected North Michigan Avenue as one of 10 Great Streets in America for its urban symbiosis — diverse users, invested stakeholders, and an ongoing commitment to quality design. 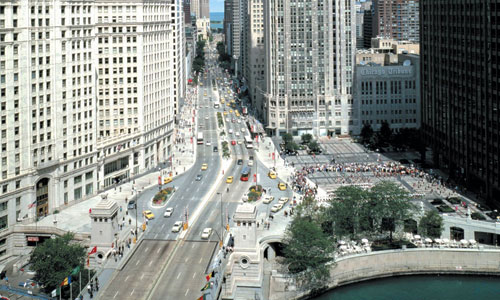 An aerial view of the Magnificent Mile. Courtesy of The Greater North Michigan Avenue Association.

One of the beloved avenues of the world, the development of North Michigan Avenue was envisioned by Daniel Burnham and Edward Bennett's 1909 Plan of Chicago as a major commercial corridor in the style of the Champs Elysees in Paris. Beginning in the 1920s, the avenue grew to include high-rise office buildings, luxury retail merchants, hoteliers, and corporate headquarters. Today, the Magnificent Mile is every bit a vertical neighborhood, integrating its historical identity, structures, and spirit of public-private partnership to create an unmistakable, multi-faceted character.

At its core, North Michigan Avenue is a tremendously active street. The avenue has six lanes for vehicles and broad, bustling sidewalks shielded by extensive, mature greenery that fosters a vibrant but safe pedestrian environment. The old Chicago Water Tower, built in 1869, creates a jog in the otherwise linear street; the irregularity generates a center of gravity for the avenue. The water tower is flanked by a park surrounded by a canopy of trees, highlighting this local historic icon. Less than a quarter mile away is the Chicago Transit Authority's parallel subway Red Line. Numerous buses and seasonal trolleys serve the avenue together with Chicago River tour boats and a water taxi.

Characterized by a tremendous diversity of uses and users, North Michigan Avenue accomplishes the rare feat of providing a full array of neighborhood amenities in a dense urban core. It is home to retailers such as Cartier and Burberry, the Four Seasons and Ritz-Carlton hotels, as well as residential skyscrapers, museums and corporate offices. People live, work, shop, visit, and recreate in this seven-block area.

Public and private realms align within the Greater North Michigan Avenue Association, a nonprofit community advocacy group formed in 1912 (originally named the North Central Association). In the 1940s Arthur Rubloff, a leader in the association, coined the moniker "The Magnificent Mile." According to City of Chicago urban planner Kathy Caisley, the association remains a champion of the street. "They form a crucial link between the business community and residents," she said, "and work closely with the city to ensure that the Magnificent Mile remains magnificent." 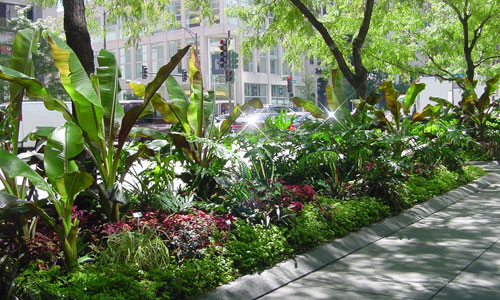 The partnership functions because stakeholders understand the value of buying into a collective vision of a better street. The association's activities — from development and signage review to avenue promotion — complement property owners' desire to create a striking street environment. North Michigan Avenue property owners privately fund all the greenery in both the parkway planters in front of their buildings and in the medians that run the length of the Magnificent Mile, creating new displays for the spring, fall, and summer planting seasons. This is an enormous undertaking by private entities that has a substantial positive effect on the city. "Oftentimes, you will find various property owners engaging in a little friendly competition to see who can 'out-beautify' the other in these mini urban gardens," said Sarah Fleming, the association's planning manager. "This overwhelming commitment to both the avenue and to the city of Chicago is part of what makes North Michigan Avenue one of the great avenues of the world."

North Michigan Avenue's legacy of exemplary design is ongoing. Some of the city's most beloved and famous skyscrapers are here, including the Tribune Tower (1925), John Hancock Center (1970), and the contemporary Crate and Barrel flagship store. Revised zoning in the 1980s allowed for the infill of open air building arcades (created with 1970s zoning bonuses) with high-end retail space, and a recent special sign district, established in 1997, ensures high quality signage.

North Michigan Avenue provides an outstanding example of what planning, greening, and positive public-private partnerships can create, making it one of America's leading great streets. 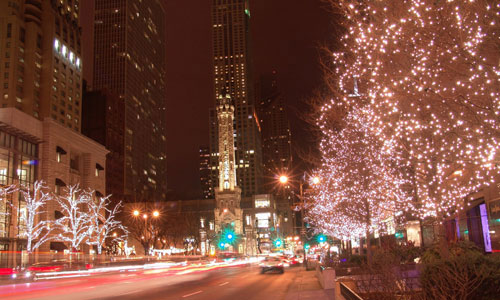 The Magnificent Mile and Chicago Water Tower at Night. Courtesy of Shutterstock.