Historic preservation and pedestrian-oriented developer Tony Goldman likes to call Ocean Drive America's Riviera. That may seem like braggadocio, but Ocean Drive has the history, characteristics, people, and glamour to deliver on the claim.

A block east of Collins Avenue, the city's main thoroughfare, is a 10-block-long section of Ocean Drive that runs north and south between Fifth and 15th Streets. It is one of APA's top 10 Great Streets for 2007 because of a unique architectural legacy; citizen-led historic protection and planning efforts; mixed-use, pedestrian-oriented restoration and redevelopment; and ongoing public support. 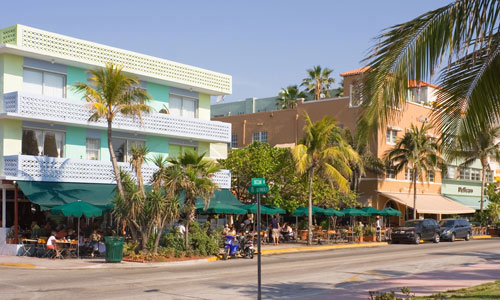 It was only a few short years after Miami Beach was incorporated in 1915 that the wealthy and well-heeled, including Harvey Firestone and J.C. Penney, started to move to the area. During the next two decades the city's unmatched legacy of Mediterranean Revival, Art Deco, and Streamline Moderne hotels, apartments, and other buildings — well over a thousand — would be built.

Following World War II, however, the hotels along Ocean Drive — none taller than 10 stories — went into a 30-year period of decline, abandonment and, for some, demolition. City officials and developers believed the only solution was to level them all and construct a modern-day Venice with canals, restaurants, high-rise hotels, condominiums, and shops.

Barbara Capitman, a writer and former newspaper reporter who moved to Miami Beach from New York City around 1973, saw it differently: protect and restore the city's stock of Art Deco buildings, including those along Ocean Drive. To aid her cause she founded the Miami Design Preservation League in 1976 and, by 1979, the federally designated Miami Beach Architectural District was approved. The designation was only the first step, however.

Changing attitudes — some considered the Art Deco historic designation a "scam" and too much government interference — and gaining public, business, and political support for meaningful historic area protection ordinances would take another decade.

Helping generate that public support, together with a new class of visitors and investors, was a wave of fashion models and ad photographers in the mid-1980s. This exposure, and that of the television and movie industries, kept the area in the public eye. 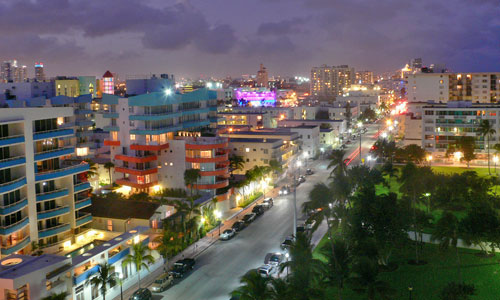 At the same time, the Miami Beach planning department developed a plan to redesign Ocean Drive. The proposal received an APA National Planning Award honorable mention in 1986. It included rezoning the area to mixed use, expanding sidewalks on the west side of Ocean Drive to 15 feet for outside tables and seating, creating a 20-foot wide promenade and outdoor concert stage on the eastern side of the drive, and establishing a business improvement district.

To fund the street improvements, which took three years to complete, business interests led by Tony Goldman launched an "Our Drive, Ocean Drive" campaign to garner voter support for a $3 million bond proposal, which was approved in September 1986.

Success of the historic district and compatible revitalization created a situation Capitman wanted to address from the start: how to ensure that modest- and low-income retirees could still live there. Some progress has been made by the nonprofit Miami Beach Community Development Corporation and the city's affordable housing agency. However, a 2007 survey found more than half of the residents think additional affordable housing is needed. Single-family homes in Miami Beach today average $850,000.

Almost three decades have passed since the federal Art Deco historic designation for Miami Beach was approved. During that time a committed constituency of residents, business owners, and community leaders has come together to support protection of the city's 1920s and 1930s architectural legacy in perpetuity. That public support is the foundation upon which Ocean Drive's continued prosperity also depends. 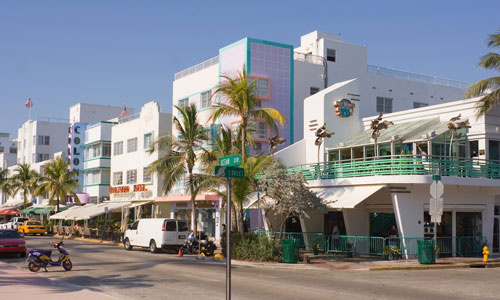 Palms are casting shadows at the hotels and restaurants of Ocean drive. Courtesy of Shutterstock.