First envisioned in Joseph Smith's Plat of Zion of 1833 and later employed by Brigham Young in 1847, South Temple Street was meant to be the finest and most prominent avenue in Salt Lake City, as well as a model for other cities and towns in the west. Much of South Temple's success today is a direct reflection of this original bold vision.

The American Planning Association has selected South Temple Street as one of 10 Great Streets in America for its historical residential design and craftsmanship, diversity of land uses, and the integration of multiple forms of transportation throughout history — as well as commitment on the part of the community to preserve its legacy. 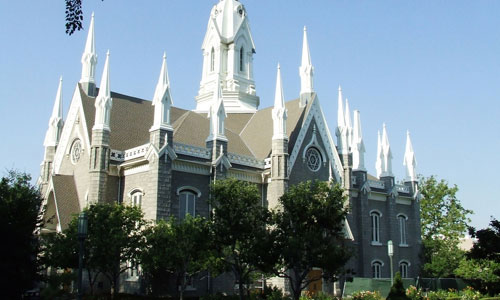 A major east-west corridor, South Temple Street is bounded by a historic residential neighborhood and the University of Utah to the east and the historic Union Pacific Railroad Depot to the west. Running 18 blocks long, the street encompasses everything from a mature tree-lined, mixed use district with historic homes, churches, commercial services, and retail establishments to the city's central business area and downtown.

Originally a dirt road, South Temple or Brigham Boulevard developed as a stately residential street as Brigham Young and other church leaders began building homes on the street. As mining became an economic powerhouse in Utah, the wealthiest families built their mansions along South Temple. Today, it is home to the world's richest compendium of religious and non religious buildings: Mormon and Masonic temples, Presbyterian and Catholic churches, historic fraternal clubs, and stately homes of a bygone era, including the Kearns Mansion, currently home to the Utah governor.

South Temple's history has not been all grandeur, however. Amendments to the city's zoning ordinance in 1976 encouraged commercial development and higher residential densities through adaptive reuse of large residences and former mansions and through new construction. The consequences were profound. As property values increased, significant structures were lost at the expense of South Temple's historic residential character.

"In the 1960s and 1970s the community began fighting this trend, which played a very large part in initiating preservation efforts in Utah," said Janice Lew, Salt Lake City historic preservation planner. Salt Lake City responded to citizen demands for designation of South Temple as Utah's first local historic district. This district was later nominated to the National Register of Historic Places in 1978. 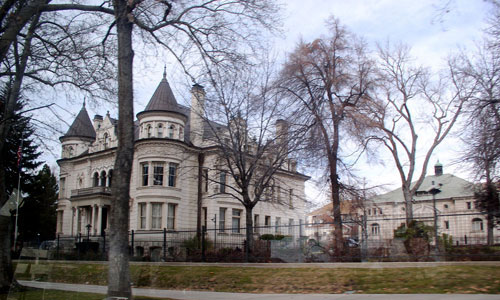 Front view of the Governor's Mansion. Courtesy of Theorris.

South Temple residents didn't want to protect only historic buildings and mansions, but also the small, important details and features, such as carriage steps, hitching posts, and sandstone retaining walls. The city went as far as turning original lattice posts used for streetcars into modern-day streetlamps.

South Temple has successfully maintained both its multimodal and pedestrian elements. From accommodating carriages and streetcars to eventually automobiles, its width continues to allow for varied forms of transportation. Sidewalks with parking strips, bike lanes, and car lanes with compatible speed limits make up the residential areas; buses, cars, and two light rail stations complement the downtown section. Mature shade trees serve as buffers from the street and create a safe and enjoyable pedestrian experience along South Temple.

"South Temple simply tells the great story of our city's past," says Salt Lake City planner Ana Valdemoros, "and is also a statement of the efficient combination of historic preservation and modern planning tools." Thanks to community leaders, residents, planners, and others, there is an ongoing commitment to Brigham Young's vision that this be the finest street of the city. 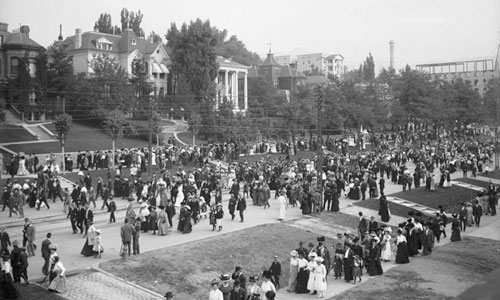