Known as the "Jewel of America's Grand Avenues," St. Charles Avenue has served as a majestic gateway to New Orleans for nearly two centuries. While this grand boulevard resonates with the beat of modern living, the slow, steady rhythm of the past echoes through meticulously landscaped yards of the Garden District.

Since 1835 this oak-lined avenue, one of APA's top 10 Great Streets for 2007 and an icon of Southern style and charm, has been home to the St. Charles Avenue streetcar — the oldest, continually operating line in the world. Since its inception, the streetcar line has shuttled workers between the town of Carrollton and the heart of the Crescent City — one of the most visually stunning transportation arteries in the world. 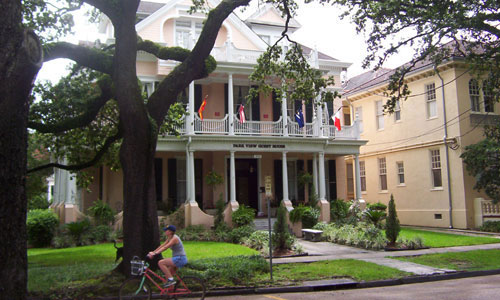 Added to the National Register of Historic Places in 1973, the streetcar line today brings together tourists, students, and commuters aboard its vintage cars. Partially closed since hurricane Katrina, the streetcar line is expected to be fully functional in 2008.

As the streetcar line evolved — from mule power to steam to electric — so, too, did this six-mile stretch of street. Although it follows, to some degree, the curve of the Mississippi River, St. Charles Avenue is an integral part of New Orleans's rectangular street grid. The boulevard stops at the edge of the Vieux Carre, the city's historic district.

St. Charles Avenue is home to historic Audubon Park, Loyola, and Tulane universities — the city's renowned centers of higher education — and many historic churches and synagogues. But, it is best known as a place of residential grandeur; a place where the most affluent and powerful once lived. The street also contains one of the most magnificent collections of antebellum Greek Revival homes.

Following World War II, a number of historic houses were torn down and replaced by large-scale apartment and commercial buildings. The wave of redevelopment led the city in 1972 to adopt a moratorium on the demolition of older homes and determine whether a historic district commission was warranted. Extensions were granted over the next three years until, in 1975, historic district status was granted to the area. Still, much of St. Charles Avenue is unprotected, causing a variety of incompatible development, including fast-food restaurants. 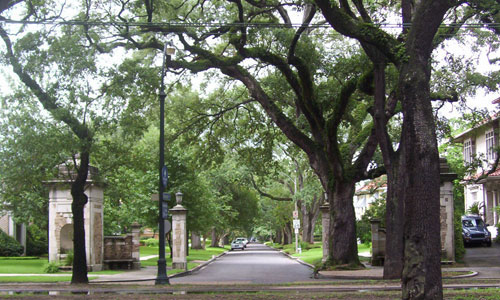 The boulevard was given historic district status between Jackson Avenue and Jena Street in 1976. The majority of homes along this segment of the avenue are frame constructed and set back from the front property line behind ornamental cast-iron fences. Pedestrians often notice that the separation of the houses from one another, and from the sidewalks, adds to the perceived width of the street and provides additional areas for landscaping.

Whether viewed from the streetcar that runs down the avenue's grassy median or while walking through the heart of the Garden District, the lush, almost tropical, surroundings and elegant residences evoke a sense of romanticism. St. Charles Avenue truly is a feast for the eyes.

Long a source of local pride, St. Charles Avenue survives today, in part, due to its roots in the city's cultural traditions. It is the historic New Orleans Carnival parade route. Virtually all major parades originate in the Uptown and Mid-City districts and follow a route along St. Charles Avenue. Several homes and intersections remain integral to the festivities.

This combination of history, culture, and tradition has sustained St. Charles Avenue, setting it apart as one of America's premier residential boulevards. 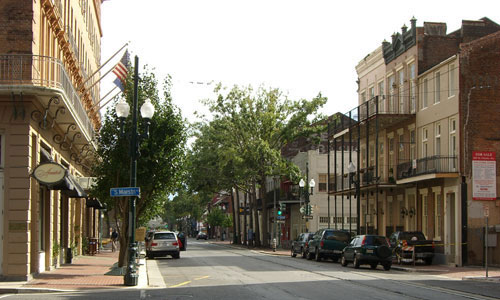