Main Street in downtown Annapolis, Maryland, is defined as much by its three centuries of history and well-preserved 18th- and 19th-century buildings that line its five blocks as it is by those using it today to work, shop, visit, recreate — or just enjoy themselves.

One of 10 APA Great Streets in America for 2008, Main Street is something of a living museum, a place that makes significant contributions to Annapolis's downtown economy at the same it remains physically and visually connected to its history, maritime culture, and architectural character. 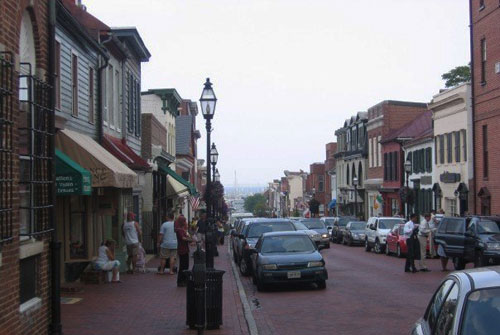 The heart of one of the first planned cities, Annapolis' Main Street exemplifies colonial Baroque architectural styles. Photo courtesy the City of Annapolis.

The 1696 physical plan for Annapolis and its street layout were created by Governor Francis Nicholson and based on baroque urban planning principles advanced in Europe during the 17th century. The governor's plan used the existing topography to accentuate the city's two most important buildings: the Maryland State House, located on downtown's highest point of land, and St. Anne's Episcopal Church, located on the second highest spot.

Further setting these two buildings apart from all other downtown structures are circular rights-of-way, each with several radial streets including Main Street. Originally named Church Street, the five-block-long Main Street lies between Church and Memorial Circles. At the Church Circle end the street affords stunning vistas of the Chesapeake Bay. Looking up from Memorial Circle, next to Spa Creek and the Annapolis City Dock, one has a clear view of St. Anne's Church.

Lining the brick-paved street are 65 historic buildings, including the Maryland Inn at the corner of Main and Church Circle. The inn houses the Treaty of Paris Restaurant where several of the signers of the treaty that ended the American War of Independence — including John Adams and Benjamin Franklin — came following the historic occasion in 1784.

Concern about preservation of these and other historic buildings dates to 1952 and Historic Annapolis, Inc. The group pioneered the use of historic preservation easements years before federal laws were enacted to protect historic structures. 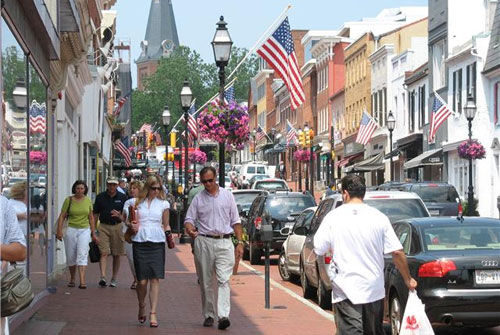 Main Street is frequented by both residents as well as tourists interested in the unique boutiques and seafood restaurants. Photo courtesy Conor O'Malley.

The city's local historic district zoning ordinance, including facade restrictions, was adopted in 1969 and revised in 1996. Guiding implementation of the law is a seven-member Historic Preservation Commission.

Main Street provides visitors and residents alike an historical experience, whether persons are there to shop, tour, dine, attend a special event, or for another occasion.

"We seek balance on Main Street," notes city official Mary Giannini. "If there are missing stores, we try to recruit businesses that will make a visit to Main Street a more complete experience."

The street has a festive air during the holiday season when the Downtown Business Association and businesses along Main Street sponsor Midnight Madness two nights before Christmas to attract holiday shoppers to their decorated stores. Throughout the year, the city and merchants decorate the street with hanging flower baskets, flags, and banners. Each October brings visitors the thousands who arrive for the world's largest in-water power and sail boat shows, which take place at City Dock.

Helping to keep the street nearly litter-free are twice-a-day sweepings. To reduce the amount of stormwater emptying into the Chesapeake Bay, the city has built rain gardens at Susan Campbell Park near City Dock and Memorial Circle. There also are bike racks and city bus service along Main Street.

To Annapolis city alderman Ross Arnett's way of thinking, "Main Street is the lifeblood of Annapolis." Given the assembly of architectural details, attractive qualities, interesting discoveries, and everyday pleasures found here, it's easy to see why Main Street is a source of pride not only for Annapolitans, but Americans across the country. 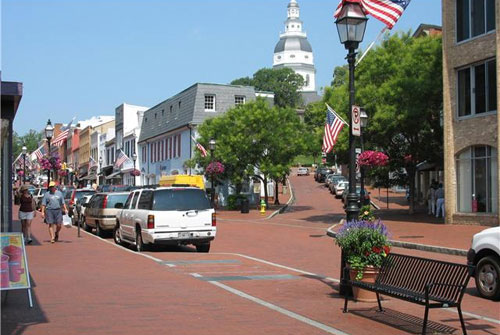