During the past 130 years, Tempe, Arizona's Mill Avenue has evolved into an eclectic, urban oasis. There's no mistaking the street's authentic sense of place that embraces both the past and future: remnants of adobe and timber enclosures of early Mexican-Americans stand next to brick and milled-wood buildings of the territorial pioneers and the contemporary architecture of today's development.

Named one of the American Planning Association's 2008 Great Streets in America, Mill Avenue demonstrates how public- and private-sector commitment, a willingness to take risks, and a dedication to community design and historic preservation create a place of lasting value. 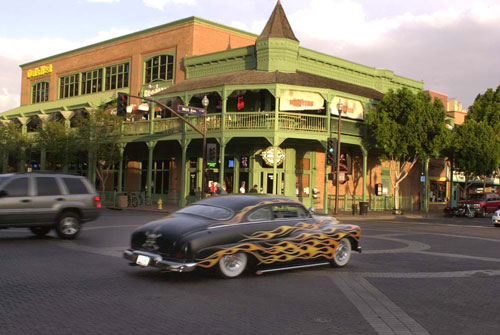 A vibrant and lively street, Mill Avenue has often been characterized as the heart of Tempe, Arizona. Photo courtesy jwestphotography.com.

Today the seven blocks of Mill Avenue designated as an APA Great Street, between the Rio Salado River on the north to University Drive on the south, are the heart and soul of downtown Tempe. The street supports a workforce of more than 9,000 and hosts 2 million visitors annually. Due in large part to the avenue's pedestrian scale, the city has developed a national reputation for excellence in hosting major sporting and cultural events — including the Insight/Fiesta Bowl Block Party, considered one of the nation's top 10 New Year's Eve parties.

The historic Mill Avenue Bridge, constructed in 1931, provides a dramatic sense of arrival into the city for the 19,000 vehicles and 13,000 pedestrians that daily traverse the roadway. Light rail will bring thousands more each day to Mill Avenue starting in December.

Other changes to Mill Avenue have come from two streetscape programs. One in 1987 widened brick sidewalks and added street trees and thematic lighting to encourage pedestrian activity and social interaction. In 2004 the street's four lanes were reduced to two in order to calm traffic and accommodate bike paths and on-street parking.

More than 3 million square feet of new retail, restaurant, office, and residential space has been built along the street during the past quarter century. Annual sales in the city have skyrocketed from $12 million to $160 million, providing Tempe with more than a 50-to-1 return on its investment.

The Mill Avenue experience today is far different from that of the 1970s and before. Suburbanization and the resulting urban disinvestment of the 1950s and 1960s hit Mill Avenue hard. Many community leaders favored the wholesale demolition of the district while others backed a hands-off approach. Eventually the city commissioned a group of local planners and architects, the Par 3 Group, to study Mill Avenue and its environs. The resulting plan, adopted by the city council, sought not only to revitalize the street but to preserve historic buildings and enhance the pedestrian experience. 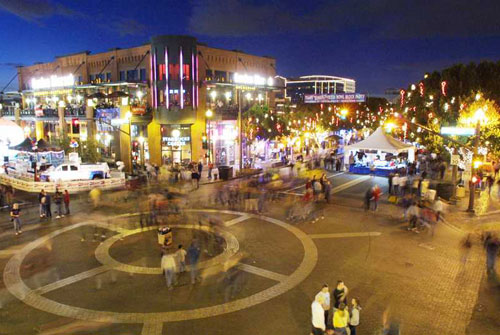 What continues to draw people to the Mill Avenue District is the sense of the unexpected, that creative spirit that wafts through the community. Photo courtesy Durrant Williams.

The 1968 decision to locate the strikingly modern Municipal Building near Mill Avenue signaled local officials' commitment to the area. Five years later it was bolstered with the establishment of a redevelopment effort that directed planning resources and earmarked funding for the area.

The commitment of Don Hull, city community development director, to the street's redevelopment and appointment of planner Dave Fackler to lead implementation were critical to the street's rebirth. Fackler's contributions were so important, in fact, that the intersection of Fifth Street and Mill Avenue was designated "Fackler Square" in his honor.

Despite its transformation during the last three decades, Mill Avenue is poised for potentially even greater changes because it links Tempe's compact downtown with two rapidly growing areas — the Rio Salado Project and Tempe Town Lake to the north and Arizona State University to the south. Within a square mile of Mill Avenue, more than $2 billion in new development is planned. To ensure that new development complements Mill Avenue's sense of place, Tempe recently finalized The Urban Open Space Development Plan and has adopted community design principles for the downtown and Mill Avenue District that were recommended in the city's General Plan 2030.

"More than a street, Mill Avenue is a city room" where some events are planned and others happen spontaneously, says Mark C. Vinson, AICP, Tempe's city architect and community design director. "What continues to draw people to Mill Avenue is the sense of the unexpected, that creative spirit that wafts through the community." 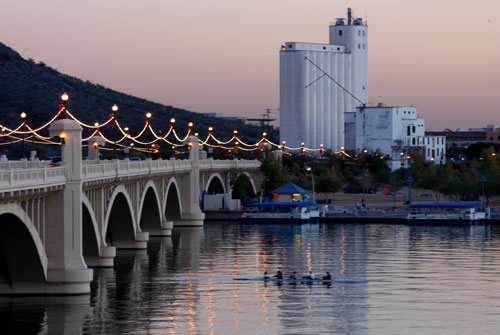