Reinvigorating Philadelphia's historic South Broad Street from a period of decline during the 1960s and 1970s took more than $100 million in public funds, but the changes are as noticeable as night is from day. New lighting and streetscaping, new and refurbished theaters, new hotels and restaurants, and more people are all signs of both public and private investment and the new energy that is now manifested here.

Known as the "Avenue of the Arts," eight blocks of South Broad Street from Philadelphia's city hall to South Street have been designated an APA 2008 Great Street for their historical character, focus on the arts, and social vibrancy. 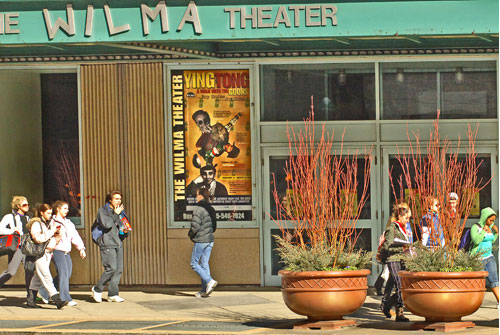 The Avenue of Arts is a destination for students, residents, and visitors alike for education, entertainment, and sightseeing. Photo courtesy Dick Gouldey, City of Philadelphia.

One of the earliest planned streets in the United States, and listed on the National Register of Historic Places, the north-south Broad Street was part of the plan that surveyor Thomas Holme developed for Philadelphia in 1681. Up until the mid–19th century, however, Broad Street was still rural and bucolic. The site for the Academy of Music, built in 1857 at the southwest corner of Broad and Locust streets, was selected for the street's remote and noise-free setting.

Over time, South Broad Street became a fashionable address for mansions built by the city's industrial plutocracy during the mid–19th century. Later in the century, Broad Street was transformed, and it was here that the city's top banks and offices were built, including the Land Title Building designed by planner and architect Daniel Burnham. The street's fortunes began to decline after the 1950s, with development of the nearby Penn Center as well as skyscrapers along Market Street.

A new chapter for Broad Street began in 1978 with the exhibition, "Broad Street Comes Alive," sponsored by the Philadelphia Art Alliance. The exhibit contained a vision of transforming Broad Street into an "Avenue of the Arts," but wasn't enough of a catalyst for change, and the street's hard times continued through the 1980s. During this period discussions continued, and a consensus emerged among arts organizations, the business community, and the city that South Broad Street needed revitalization.

Implementation of the new vision for the street finally got underway in 1993 when Avenue of the Arts, Inc., was formed to help spark redevelopment along the street from city hall to South Street. A strong advocate of these efforts was former Pennsylvania Gov. Ed Rendell, who was Philadelphia's mayor at the time. 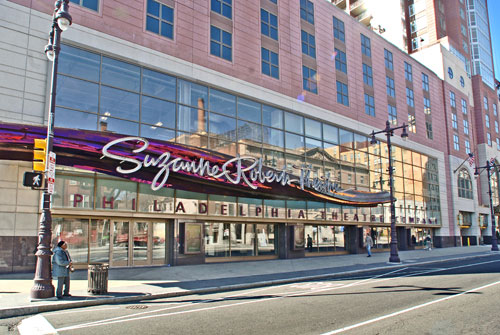 Founded in 1974, the Philadelphia Theatre Company was the first of Philsdelphia's ambitious young performing arts companies to produce a new generation of theatre, while including audiences in the development process. Photo courtesy Dick Gouldey, City of Philadelphia.

Today, the Avenue of the Arts is home to 23 arts organizations, including such major theaters as the Kimmel Regional Performing Arts Center, the Merriam and Wilma theaters, and the newest venue, the Suzanne Roberts Theater. There also are three major art institutions, three large hotels, more than 20 high-end retailers, over 30 restaurants, and 1,450 residential units converted from vacant office buildings or newly constructed. Altogether, the redevelopment has resulted in more than $1.5 billion in private investment.

Streetscape improvements include vintage lampposts, sidewalk paving, planters, bus shelters, and decorative subway entrances. The ground floors of the great majority of buildings are occupied with retail, restaurants, and cafe users, while the upper floors of buildings are offices and residential units.

Inherently walkable, the street is also served by subway and city bus. Generously wide sidewalks allow bistros and restaurants to have outdoor seating. One can have a cup of coffee with friends and watch people walk by, or enjoy the elegance of buildings across the street from where one is casually sitting. Gaze upward and you can see students practicing ballet in nearby University of the Arts practice studios.

Changes to South Broad have only made it more exciting over the years. The street is still part of the route for Philadelphia's famous Mummer's Parade held on New Year's Day and is the centerpiece for the annual 10-mile Blue Cross Broad Street Run. By all measures, the goal to get people back on South Broad Street "Avenue of the Arts" has been achieved. 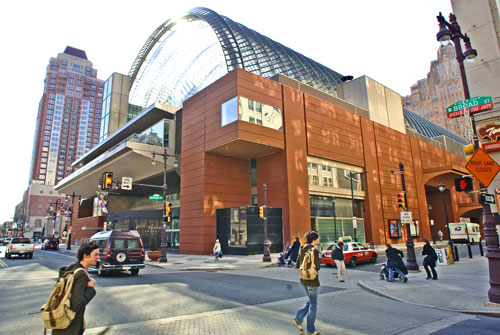 The Kimmel Performance Arts Center is an example of one of the arts institutions that give the Avenue of the Arts its nickname. Photo courtesy Dick Gouldey, City of Philadelphia.