During the late 19th century, Summit Avenue was not considered the grandest of the country's Victorian-era residential boulevards, yet today this 4.5-mile-long boulevard between downtown St. Paul, Minnesota, and the Mississippi River stands alone as the country's best-preserved avenue from that period. Remarkably, more than 370 of the gilded-age mansions and other residences representing a dozen different architectural styles remain.

Complementing this architectural legacy, and leading APA to single it out as one of 10 Great Streets for 2008, are the avenue's marvelous vistas, park-like qualities, and a decades-long history of planning measures, civic participation, and private stewardship that kept Summit's unique character intact. 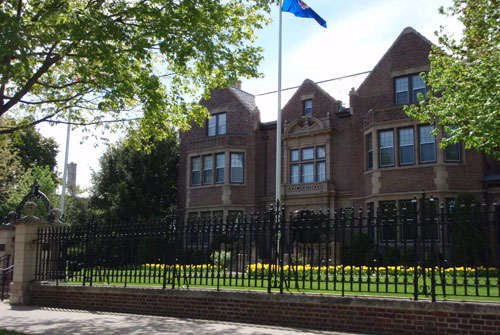 Summit Avenue is remarkable for the quality it maintains throughout its length of five miles and its large number of expensive homes, including the Governor’s residence. Photo courtesy Emily P. Goodman.

The first house to be built on Summit, or the "bluff" as it was then known, was by Edward Duffield Neill in 1855. It was not until the 1880s that the first major wave of house building got under way. The most famous house built during this time was the Romanesque mansion in 1887 for Canadian-American railroad executive James J. Hill. Located at 240 Summit, the Hill House is one of the residences that helps give the easternmost section or Lower Summit its embassy row–like character.

About this same time the Summit Avenue Improvement Association was formed in order to encourage property owners along the western-most half of the avenue to donate enough land on each side of the street to widen the public right-of-way from 100 to 200 feet. This allowed creation of a center median, including a bridle path for horses. Planted with trees and shrubs, today this shaded canopy imparts the feeling of standing in a large, open-air ballroom.

Summit Avenue was not only the address for "all the people who made Saint Paul," said Macalester College urban geography department chair David Lanegran, but also churches, universities, businesses, and a limited number of apartments. It was the latter, built during the early 1900s, that led the city to create a single- and double-family residential zoning district along Summit Avenue in 1916. This was a year after the Minnesota state legislature passed a law allowing first class cities to establish such districts. The special measure would later keep many of the mansions on the avenue from being converted to commercial or other non-compatible uses. 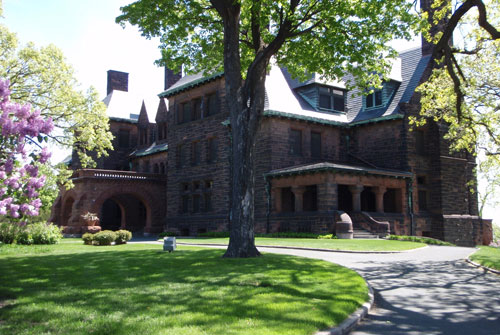 Railroad tycoon James J. Hill's mansion helped set the tone for the avenue and still serves as the epitome of what is has to offer. Photo courtesy Emily P. Goodman.

Summit Avenue saw another period of opulent mansion construction during the Roaring Twenties, in such styles as Beaux Arts, Spanish Colonial, Twenties and Tudor Villa, Georgian Revival, and Rectilinear. With the Great Depression, however, new building stopped and many owners had to give up the homes altogether. Luckily, Hill's mansion and several other estates were bequeathed to the Roman Catholic Archdiocese of Saint Paul, which maintained them until the 1970s when a back-to-the-city movement began to attract a new group of owners.

Among the civic groups seeking to protect the historic Victorian mansions along Lower Summit Avenue, yet making them more affordable to own, was the nonprofit Old Town Restoration, Inc. The group successfully advocated for a new zoning along this segment of Summit Avenue that allowed the houses to be converted into four-unit condominiums. Adding momentum to Old Town Restoration's protection efforts was creation of the Historic Hill National Register District in 1976, which included Summit Avenue's eastern end.

Some 20 years later this plan continues to help the community navigate college expansion and other issues in order to keep Summit Avenue St. Paul's and the nation's best "showcase street" of  the Victorian era. 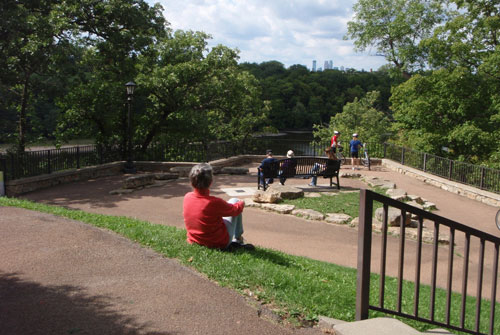 People often stop and enjoy the stunning vista of the Mississipi River gorge and the Minneapolis skyline on the west end of Summit Avenue. Photo courtesy Emily P. Goodman.