Front Street is one of best — if not the very best — place to be in this popular northern Michigan resort community. The street captures just about everything residents and visitors like about Traverse City: scenic views of the Boardman River, a Victorian-era opera house, the Jay Smith Walkway pocket park, generous 12-to-14-foot-wide sidewalks with benches and shade trees, the city's highest density of stores and businesses, and numerous festivals and special events that attract hundreds of thousands of people each year. 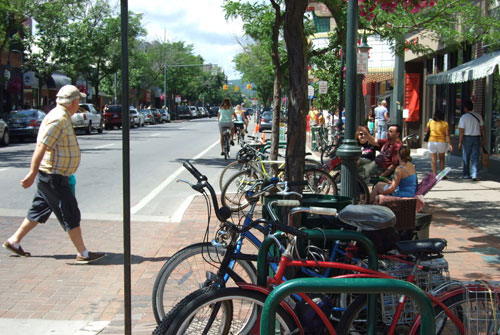 Front Street functions as a 'complete street' by accommodating all users equally well. These bike racks were installed on 8-foot curb bump-outs that narrow the roadway and help to slow traffic. Photo courtesy of City of Traverse City.

The city opera house was placed on the National Register of Historic Places in 1972. In the mid-1970s the city installed the first curb bump outs followed by 1990 streetscape enhancements that included low-level lighting, brick pedestrian crosswalks, and new Bradford pear and ash trees.

A new parking structure — located on a remediated brownfield — has ground-floor retail space. 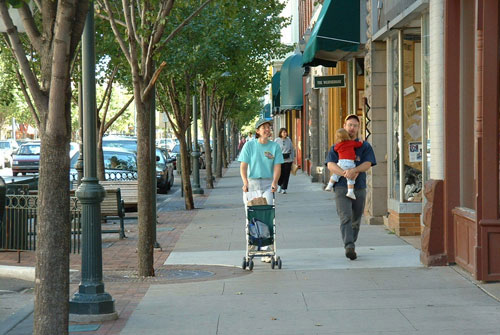 Three traffic lanes: two for automobiles, one for bicyclists 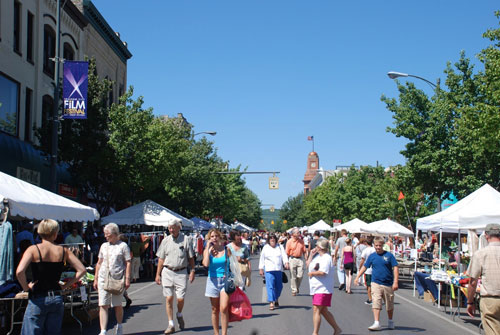