Main Street in downtown Greenville attracts residents and visitors alike with bustling foot traffic seven days a week, day and night. Once lined with numerous vacant buildings, Greenville's long-term commitment to planning and plan implementation during the past 30 years has turned Main Street into a magnet of commerce and social activity that is now expanding into neighboring areas. From its storefront displays to historic buildings, dozens of restaurants and Falls Park, Main Street offers a nexus of opportunities in a unique and remarkable setting. 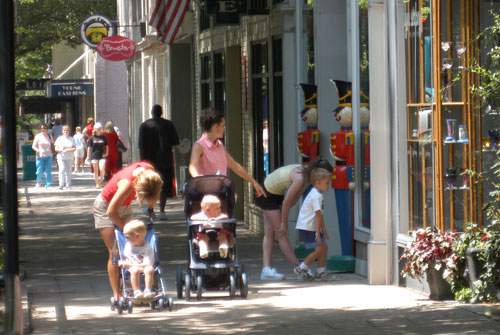 Pedestrians, shoppers, visitors, and others are drawn not just to the plethora of activities, festivals, live music, and baseball games taking place along Main, but also to its historic, scenic sense of place. Its inviting ambiance encourages everyday strolls and interludes to enjoy views of the picturesque Reedy River waterfall. 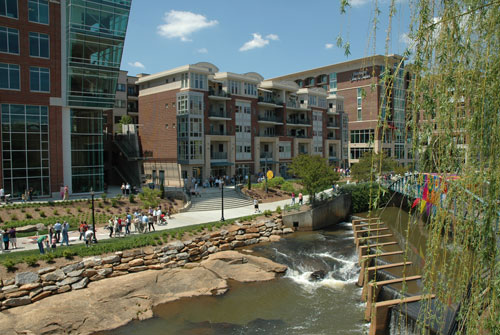 Greenville's Riverwalk viewed from the Main Street Bridge. This bridge is one of two pedestrian bridges off Main Street that overlooks the Reedy River. Photo courtesy of City of Greenville. 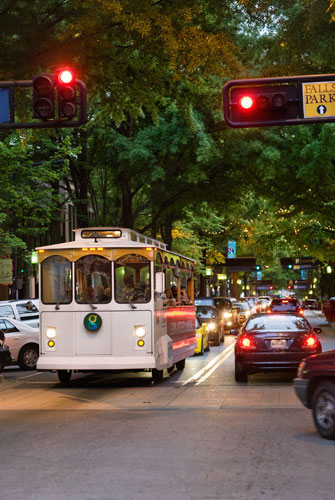 The free downtown trolley runs along Main Street to Fluor Field, the newly built baseball stadium. Parking for the stadium is off site at nearby garages. Photo courtesy of Greenville Convention and Visitors Bureau.